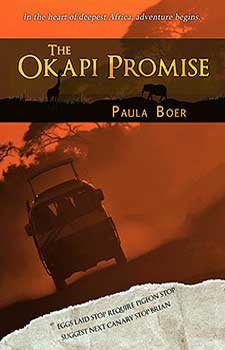 A cure for rabies is discovered in the heart of Africa. Two unknown adversaries join a small tour group to gain the serum. One wants to use the cure for the good of all mankind; the other for personal glory and profit.

A well-painted adventure on the African continent. Paula Boer brings her significant experience of the country, its people and animals to weave a believable tale of ambition, hardship, danger and murder.

The members of an overland tour travelling through the heart of Africa, from Tanzania to Rwanda and the Central African Republic each has their own agenda. While relationships form between most of the individuals others retain their distance and mystery.

Through it is the underlying race for the wonder cure for rabies and yet another twist revealed at the end.

If the reader wants a colourful mystery that brings the very essence of Africa with an exciting plot then I would recommend the Okapi Promise.
— MichaelB

The cold air did nothing to help Marc’s aching limbs as he and Diane set off along the steep rocky pathway leading away from the huts. The surrounding hillside turned marshy, with sharp bladed reeds and springy moss. Eventually the skimpy vegetation petered out to nothing. A moonscape of volcanic rocks, cut by a narrow dusty track, led into the distance.

The vastness of the mountain made Marc feel like a flea on a dinosaur’s back. The track levelled out in places giving them a chance to catch their breath. More often, the gruelling slope made Marc gasp with painful lungs. The monotonous vista of rock and cloud did nothing to ease the way, but he loved pitting himself against the physical world.

The two new friends conversed little. The effort of putting one foot in front of the other proved enough. Diane drew to a halt and pointed to a worn wooden post in the distance.

“Look. There’s our final stop for the night. Thank goodness for that.”

The weather had turned extremely cold, and a cutting wind penetrated their clothes. Marc read the words beneath the arrow. ‘Kibo Hut’. But his relief was short-lived.

“Sorry, it says there is another three hundred metres of elevation to climb.”

He could see his companion needed to recover before her reserves ran out. They stood gasping for air for a few moments.

Having regained his breath, the strong Dutchman put out his hand. “Come on. If you stop too long you’ll never start again.”

He pulled the young Canadian along a few steps until she regained her momentum. Marc enjoyed the warm contact of her skin. His heart skipped as she met his eyes.

“Thanks.” She dropped his hand and marched forward. 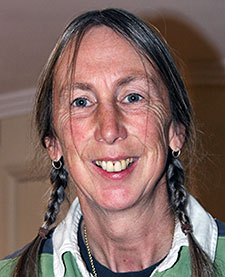 Paula Boer started her lifelong love of horses when she first rode a pony on a ranch in Canada, aged 7. On moving to England at age 9, she commenced weekly riding lessons and became hooked.

Paula’s own writing career started at Tunbridge Girls Grammar School, where she wrote a story from the horse’s perspective for her final English exam. Despite friends and teachers exclaiming that the story was not appropriate as it didn’t contain any people, Paula passed her English Language ‘O’ level with an A+!

After retiring from the hectic life of computer consultancy, she wrote her first novel, The Okapi Promise, based on her adventures in Africa in 1990.

Paula has had numerous short animal stories published in journals in the UK. She is also a regular contributor to horse magazines, especially HorseWyse.
She lives on 500 acres with her husband, two Arabians, a Waler and a stick-loving dog, Paula is working on the final in the series, Brumbies in the Mountains.