How far would you go to find your missing father? For Zeke Hailey, a teenager living in the 23rd century, even Mars is not too far. Zeke’s dad is one of the Mariners, a mysterious elite of psychics who have conquered Outer Space. Now he’s vanished on a secret mission.
But Zeke is an ordinary schoolboy without a shred of his father’s psychic powers. Armed with nothing but his wits, he bluffs his way into the prestigious Mariner’s school on Mars in search of answers.

Zeke Hailey is an engaging protagonist, unsure enough of himself to identify with yet definitely a young man with a mission and the determination to succeed at any cost. This first book in a series is a rip-roaring adventure in itself and it sets the scene for more to come. Many questions are raised and mysteries uncovered and I can’t wait for the next instalment.
― The Old Bat (Pippa Hennessy)

The Infinity Trap is what happens when Ender’s Game, Happy Potter, Star Wars and Grange Hill are popped in a Tardis and shaken about a bit to create a wonderful, gripping could-be-the-end-of-the-world tale for those reluctant boy readers.

With strange languages, bots and prophecies, The Infinity Trap is the story of Zeke, who has cheated on his entrance exam in order to get himself to Chasm, an elite off-world school for psychics, where he hopes to pick up the trace of his missing father. But something more sinister than the usual school bullying is going on at Chasm and when the school’s youngest student, Pin-mei, is kidnapped, Zeke must abandon his quest and set out to find the creature who took his friend. After all, the future of the universe could be at stake.

But in a school where everyone has a psychic skill, it’s a tall order. Terrific dialogue, some wonderful technology and edge-of-your-seat plotting, makes The Infinity Trap the perfect book to drag middle graders and younger teens away from the screen and into reading.
― Lee Murray

Bought this for my 11 year old daughter. She cannot put it down. Anything that catches a child’s imagination is a good thing in my view! The characters are brilliant, the plot is well structured, the setting believable.

Ian Douglas writes from the heart and captures the angst and uncertainty of a teen caught up in a situation too big for them. My daughter loved the book, I adored it, even my 14 year old son has prised himself away from the games console to read a few chapters. It’s fair to say we’re hooked.
― Parrot44 (Lisa Shipman)

The bubble lurched forward. This time the see-through bottom slid over an opening in the hull.
“Oh!” Zeke cried. They were dangling high above the cratered surface of Mars.
He gripped the padded bars, as though at any second he might be sucked out into the deadly vacuum.
“We’re about ninety miles up,” Scuff squeaked.
With nothing but the Martian atmosphere between them and the far below landscape, Zeke’s brain swam in its own juices. His stomach heaved viciously. Oh, that’s what the bags were for! As the bag filled up with Zeke’s breakfast he heard a
sickening ping. The sycamore dropped…
“Something’s wrong,” Zeke shouted. The sycamore was shaking like a roller coaster in an earthquake. Beneath them the mass of red splotches were growing bigger. The violent shuddering made speaking difficult.
“No…we’re… fine,” Scuff gasped through gritted teeth, eyes tightly shut.
“No…we’re not,” Zeke persisted. A tiny voice in his head was screaming.
He looked at the digital dashboard.
“We entered…atmosphere… three minutes ago.”
“Yup …wings…release…soon.”
The vehicle’s design was based on the sycamore seed with two great spinning wings. These created air resistance, slowing the craft enough to launch the parachute.
Any faster and the chute would rip.
As if in answer to Scuff’s assurance an alarm buzzed. A message flashed on the dashboard.  ‘Malfunction: wings jammed.’
“WE’RE DONE FOR!” Scuff shrieked.
Zeke glanced down. The splotches were forming into canyons, dust plains and volcanoes. The voice inside him yelled louder. Think!
“Scuff…use your…psychokinesis…free the wings!”
“I…can’t!”
“You must!”
Zeke reached out to his friend. The small gesture required superhuman effort. The increasing g-force was crushing them. Zeke squeezed Scuff’s arm. The geek gulped and closed his eyes. But he couldn’t concentrate, not now. Nothing happened.
“I can’t….sorry…just can’t.”
“Come on…you can do it.”
“Can’t…you try.”
The sycamore was becoming hot. Unbearably hot. The craggy terrain was hurtling upwards.
“Zeke, please…you do it.”
“Can’t!”
“YOU CAN!” Scuff implored him.
Zeke felt angry, terrified, and desperate. Without warning his feelings erupted.
“CAN’T…NOT… PSYCHIC!”
Bewilderment broke across Scuff’s face.
“Cheated…to get to school.” Zeke spat the words out.
Scuff hissed an ugly name. Zeke cringed but he knew this was no time for excuses.
“YOU MUST…DO IT,” he cried.
Scuff tried again. Zeke closed his eyes too. It might help, he thought frantically.
Zeke pictured the wings on top of the Sycamore, jammed in their casings. He could see them, coiled up and waiting for their covers to blow. Zeke imagined a sycamore seed, wafting safely down from its tree. He focused hard on that image. With every fibre of his being he wished for the wings to unfurl.
A new message beeped, ‘Wings operational’.
“I did it!” Scuff yelped with elation.
Yet the voice inside Zeke’s head said Scuff had nothing to do with it.
The sycamore’s speed eased. With a sudden tug the parachute released into the pale Martian sky. Their descent slowed further. Underneath their feet the crimson canyons flowered into spurs and crests.
Scuff recovered his composure.
“Bro, you are done for!” he snarled. “The minute we get out of this tin can you’ll be going back to Earth in chains.”
Exhausted, reeking of vomit and ready to cry, Zeke landed on Mars. 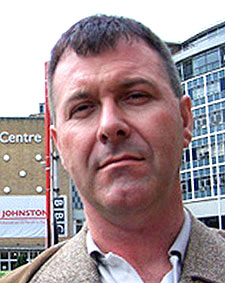 The best writers are part-librarian and part-swashbuckler. At least Ian C. Douglas thought so in his youth and always aspired to follow this path.

After a nerdy London childhood spent in the company of Tolkien, Lovecraft, and Bradbury, Ian ran away to see the World.

This quest for adventure landed him in countless scrapes, before becoming an English teacher in East Asia.

After ten years of hard grammar, he returned to his native England, and graduated with a MA Distinction in Creative Writing.

Since then he has written everything from online computer games to children’s apps.

Several of his stories have won prizes and he was a finalist in the Independent on Sunday’s writing competition. Ian visits schools as a history author with bloodcurdling tales of the past.

His writing has appeared at the V&A’s Toy Museum. Ian teaches creative writing and art. He lives near Sherwood Forest with his wife and children.

Science Fiction and fantasy has always been Ian’s first love. He is delighted to launch his first sci-fi novel ‘The Infinity Trap’ for younger adults.

Find out more about this book as well as the sequel ‘Gravity’s Eye‘ out in 2015.