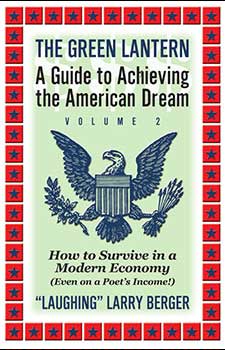 The Green Lantern: A guide for Achieving the American Dream – Volume 2 – How to survive in a modern economy (Even on a Poet’s income!)

This book was not meant to sit on a shelf collecting dust. It is a guide for daily living and is meant to be used and passed on to friends, family, etc. So buy lots of copies. This book is designed so that combining any 10 of the 36 suggestions listed here will save you $2,000.00 a year! How could you not want that?

The Green Lantern could help you live your dreams too! Its 36 ideas and a whole lot of info that turned a suicidal mental patient into a high level business owner who just got in the official Who’s Who Directory within 18 months after starting his own business! If that isn’t proof it works what is? Check it out for yourself and you’ll see!

Lawrence Berger, also known as ‘Laughing Larry,’ infuses humor and wit into his performance poetry. He has a gift for on-the-spot improvisation when an audience member throws a random word his way. If anyone embodies Shakespeare’s pearl of wisdom ‘Brevity is the soul of wit,’ it would have to be Larry. In French, ‘Berger’ is ‘shepherd,’ and Larry is someone who ‘shepherds’ both aspiring and accomplished poets as he invites them to read each other’s work in a spirit of friendship. I always look forward to the next ‘poetry buffet’ where the rule is that no one can recite his/her own work.
─ Lori D. Nolasco

Greetings:
Thirteen years ago I wrote a self help book outlining thirty six ideas on how every American could save an extra $2,000 a year. That book sold 1,000 copies and is now out of print.

In the time since, much has changed: I’ve become known as a poet and literary promoter having published five chapbooks, produced a CD, published two anthologies, run an international poetry competition, toured, and taken my first poetry collection through three editions and released it to the masses opening markets in Europe, Asia and India for myself and my clients.
There have also been many changes in the way things work. The Internet has developed into a huge juggernaut and several of its offshoots (examples: Amazon, Google, Facebook ) Have changed the way business is done in certain industries including publishing, music, retail, etc. But have things really changed that much?

It’s thirteen years later: we’ve had to deal with bailouts, scandals, the deficit, and the mortgage meltdown. Every day I hear stories of how America and the world have not seen the likes of this since the great depression of the 1920s.
When I wrote the book thirteen years ago, I was going through a severe depression of my own. I was actively suicidal and had spent about a year in the Psychiatric ward of a hospital in upstate, NY ready to end my life when I happened to pass by the ward’s T.V. room and saw a segment of the Rush Limbaugh show in which Rush stated that “Nobody in America could save even $2,000 anymore let alone enough to retire on!”

That comment pissed me off and I spent an hour explaining to the psychiatric nurse on duty that I had just come from a job in which I had sold shares in oil and natural gas wells and could probably come up with at least thirty-six different Ideas that could make it possible to save the $2,000
I was still upset but what the nurse told me, and this probably saved my life, was “For a year you’ve been unable to care about anything and just wanted to give up. Now all of the sudden your upset. It looks like you’ve finally found a reason to live.” She gave me a pencil and a pad and I started writing, a month later I had a 200- page hand-written manuscript and was out of the hospital.

I moved to Los Angeles to find an agent and went to work for the agency as a marketing director in exchange for their help in getting the book out. The agent suggested I go to a poetry reading and that was my start… 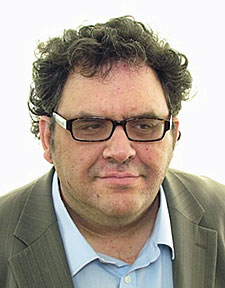 Lawrence Berger is a nationally renowned poet and has shared stages with the likes of Yvonne Del La Vega, Malcolm Jamal Warner, Otis Solomon of the Watts Prophets and more. He has appeared in major festival events such as the LA Spoken, the Denver Poetry Rodeo and more.

Watch the videos of “Laughing” Larry Berger performing his poetry Asking the Question and The Master’s Speak.

Over 4500 copies of his book Instant Poetry (Just Add Words!) have been sold so far and the book is now in its third edition.

He has lectured on sales and marketing at schools like UCLA, Santa Monica college and more. He has produced over 300 successful promotion campaigns and has been applying his skills in the entertainment, literature, publishing and mental health services industries since starting out on his own.