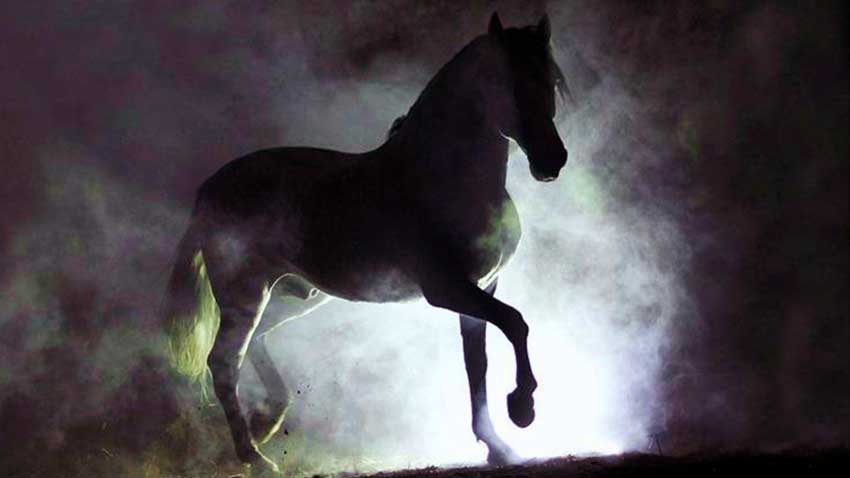 A 1955 novel by Walter Farley, The Island Stallion Races, and its unusual nod to science fiction.

Such an inclusion adds a whole other level of interest to Farley’s work. But were his SF contemporaries of the time like Robert Heinlein, Robert Silverberg, Andre Norton, Isaac Asimov, Arthur C. Clarke, and Phillip K. Dick quaking in their boots at this upstart competitor?

On one of his previous visits to Earth, Jay had become enamored of horse racing and devises a way to get Flame and his beloved master, the young boy, Steve Duncan, from Azul to Cuba to compete in the Grand International horse race. Of course, due to Jay’s smooth-talking, this plan is set into motion by the organizers advertising a “Mystery Island Stallion” racing against the fastest horses of the world. As if “suspension of disbelief” is part of the fun of reading this book.

And the Winner is…

The aliens’ primary starship is never seen (being invisible) but descriptions of “living” semi-organic material such as a halter Jay gives to Steve to put on Flame and tapestries hanging inside the starship that reacts to outside stimuli give the story an interesting ambiance and aren’t as laughable as one might expect.

Jay and Flick and others of their kind are simply explorers and observers of humanity but Jay wants to do more, to be more involved, to be more human.

With Flick’s reluctant agreement, Jay transports Steve and Flame to Cuba in a smaller auxiliary spacecraft where Flame races and wins the International. He, Jay, and Steve don’t stick around to pick up their winnings, however, as the aliens’ schedule has been moved up and Jay’s comrades are about to blast off, with or without him.

In the final chapter, Farley makes it look like Steve dreamed all this up but the epilogue hints otherwise. Whatever the scenario, The Island Stallion Races is the great escapist fare for young adults, especially those who like horses. The science-fiction aspect of it is an added bonus, providing one doesn’t think too much about it. But, in the end, that’s the whole point–a sense of wonder and a grand adventure. The reader (and really, no matter what age) gets both here.