The Picture: All it took was a few broken crayons. Not the fancy ones. Not the box with all the exotic colors. No, just a box of eight basic colors.

The picture was one that only a mother can love. Or at least that what we all thought, in the beginning. That was before all it took was a picture to make a difference. 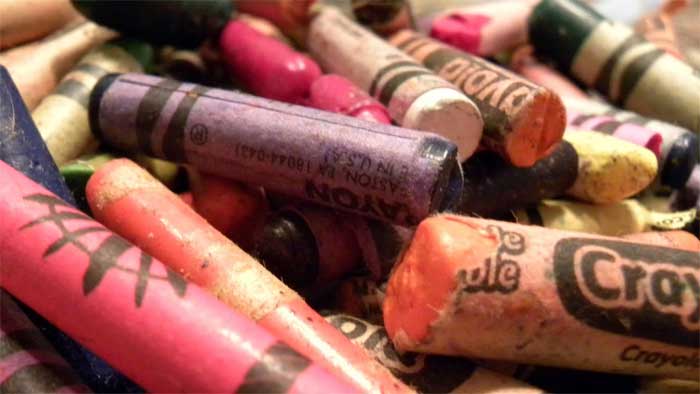 Cayla was eight years old when she drew her first recognizable picture. It was a simple picture of a crooked drawn house with a tree in the front, and a sun in the sky. The sidewalk had a winding trail that led up to the crooked house.

The crooked house with the almost square windows and the ruffle curtains. There was a family of course standing in the front yard with the green, green grass. Although the family were all stick people with u faces and bangs for the girls and flat-top haircuts for the boys.

It was still a picture of a family. A symbol as it may. A choice to make a difference.

On the other side of the world, another girl was drawing a picture. She had never used the box of eight crayons. No, she only used two tools for her masterpiece. Her picture also portrayed a family. One made of stick people. It was hard to see the hairdo, however. Crayons make it easy. You can see the redhead and the bronze babies with the use of the box of eight. Yes, eight Crayola, crayons. But when your only tools are sticks and dirt, it’s hard to tell. But, a mother can.

The first time that Cayla knew the picture would make a difference was on a field trip. It was to the city library. Outside the Mc Donald’s that the teacher took them to she saw a homeless family.

Rather a half of family.

There was no father.

There was also no food. They were outside asking for it.

The teacher and the bus driver both gave them money to eat and the mother quickly went into Mac Donald’s and bought the children’s food.

Cayla badly wanted to give them something but, she had no money besides what her teacher had told them to bring. As Cayla sat and watched the children gobble down their food she thought of her picture of a stick family. She thought of the house she drew what looked like her own. The one with the chimney, crooked windows, and family of four. The picture with the father and mother holding hands, with the two kids under the sun. The picture that was drawn with the crayons. The box of eight Crayola crayons. The broken ones.

So Cayla gave the only thing she had. The picture and two crayons from the broken box of eight. And that’s where it started. The first smile. The one that said more than thank you. The one that made everyone’s day. Cayla thought about that smile a long time that night before she went to bed. She told her mother why she no longer had eight but, six crayons instead. Her mother didn’t mind. In fact, she was very proud of her daughter. She was so proud that she bought her a box of fourteen brand new crayons.

And Cayla did just as she had before. She looked for children everywhere she went. She even convinced her father to take her out on weekends to soup kitchens to give out her gifts.  She spent her evenings drawing pictures.  And she spent her weekends passing out, two broken crayons, two plain white papers, and one drawn picture. The picture of the house with the winding driveway, the green, green grass, and the crooked curtains.

Her mother was a 5 feet 11-inch black woman with Hershey chocolate color skin. She was a manager at a marketing firm and she was just a little too bossy at times.  But, it was just her nature. She really loved people and was always trying to save someone. Cayla’s mom had come from a rough background at best. Cayla didn’t remember those days but her older sister did.  And maybe that was why she didn’t want mom taking Cayla down to the soup kitchens on the weekend.  Funny, no matter how tired dad was he drove Cayla anyway.  And Cayla drove them crazy! Just like mom, she wanted to save people. She wanted to share what she had.

So she shared her crayons from the box of fourteen. She shared her pictures of the houses with different color people. She shared all she had.  And then she shared her ideal. First, she told a teacher. Ms. Miller had been Cayla’s teacher two years ago when she was in the third grade. She was also the teacher that had taken her on the library trip when she gave away her first picture.

The picture she had created with the box of eight broken crayons.

Cayla had been watching Charity commercials that asked for money to feed the children. Cayla didn’t have any money.  But she did have her pictures. The ones she drew every week with the box of now, twenty-four crayons that her mother made her polish father buy her every week. Cayla had developed a system by then. She broke all of her crayons in half. Half of them she used to draw the pictures that put the smile on the little kids’ faces, and a half she used to get them to draw smiles of their own.

Cayla’s teacher decided to get the whole school involved. Once a week the kids would spend an hour a day drawing pictures for homeless children. And yes, the crayons were always broke in half. One half to draw the pictures that put the smiles on their faces. And half the crayons were used so they could draw smiles of their own. By the time Cayla graduated high school she had been instrumental in delivering over a hundred thousand pictures to children in homeless shelters

all over the country. That was ten years ago.

There are many children who have written to me over the years and thanked me for those pictures of the families with different color faces. They loved the houses with the Smokey chimney and the slanted windows with the crooked curtains. Many of those children are still a part of my life. And my teacher is still my advisor. Today she is also my traveling companion. We have traveled to over seventeen countries throughout the world, passing out our broken crayons.

Last month I traveled to a very poor country and as I bent down and handed a little girl two broken crayons and two pieces of paper and one picture I smiled. Her picture looked much like mine. Her tools were different. She had a stick and her family that she drew was in the dirt. But, I learned something.

Color doesn’t matter. The picture does.