It was three summers before I once again had the good fortune to share another adventure with all five of my dear goblin friends, Globular Van der Graff, (Glob), Makepeace Terranova (Make), Byzantine Du Lac (Byz), Eponymous Tringthicky (Mous) and finally, curmudgeonly old Neopol Stranglethigh (Neo). 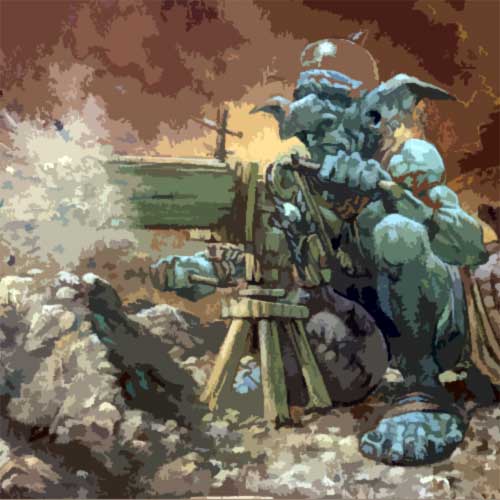 I was busy making myself a new flint-headed spear one day in midsummer when I became aware of a small rapidly approaching shadow at the extreme periphery of my vision.

Glob sat down heavily and out of breath beside me while scratching his ancient leathery ears, taking advantage of the cool shelter on offer courtesy of the extended thatch above the entrance to my home away from the heat of the noon day sun.

“Morning Glob,” I replied as I looked at my old friend’s expressive face. Clearly, something of great import was worrying him.

“What’s wrong Glob, what is it that brings you out of the forest in the middle of the day?” I enquired.

“Tiz Byz I’m afraids yung Mica,” he began, shaking his head. “Peer’s he’s gorn wandrin orf on a fool’s journey,” Glob continued with a glum look that spread across his face like a black rain cloud, revealing much more of his deep concern for our friend Byz than what he was actually saying.

Goblins were not generally known for fully explaining what it is they actually meant.

Apparently a few days earlier Byz had been told a tale by a passing traveller he met on the forest road about a hoard of precious jewels somewhere beyond the valley to north and had gone off on his own to seek them out.

Mention the word jewel to a goblin and they quickly begin to foam at the mouth in sheer ecstasy at the thought of finding those elusive and brightly coloured gemstones.

Of all my five goblin friends, Byzantine Du Lac was the most gentle and simple-minded. Byz always had the stupid grin all simpletons share on his highly expressive and kindly face.

He often wandered off on his own, distracted by something as simple as a pretty flower or a coloured toadstool or any brightly coloured thing come to that, so when Glob told me about how poor Byz had swallowed the traveller’s tale hook line and sinker, it came as no real surprise that he had wandered off to find a hoard of pretty coloured gemstones.

“Me n the lads is wurrid bout him Mica. E ort’nt go off on is own n we wuz wundrin if you’d come with us to get im back like?” Glob asked, as he frantically reached inside the collar of his jerkin to grab at a spider that was slowly crawling up his back, tickling his leathery skin with its furry legs and driving him to itchy distraction as he scratched his back raw with his torn fingernails.

Glob didn’t have to ask twice for my help. He knew I would always come when called without needing to know the reason why, after all we were more than brothers now since the time of my manhood trial three summers earlier.

“Let’s go my old friend, it’ll be dark soon,” I replied as we began to prepare.

By nightfall Glob and I were sat around our campfire together with the remaining members of our rescue party, my other goblin friends, Make, Mous and Neo – all happy to be together once more.

As the evening wore on, fuelled by drinking horns filled to the brim with the finest goblin brewed mead, courtesy of cross-eyed Neo’s personal supply, we were busy burping, hiccupping and laughing so much that tears rolled down our faces as we competed with each other to see who could make the loudest noise when passing wind after eating a supper fit for a king thanks to Make’s delicious honeycomb that followed our main course of freshly caught fish and wild mushrooms, courtesy of Make.

It wasn’t the noises we made so much as the strained expression on each contestant’s face as he manufactured his contribution to the contest that brought on our raucous drunken laughter and floods of mirthful tears. The powerful effect of the strong mead added to it of course.

Behind us hobbled for the night, not that she would have wandered off at all while Neo was close, magically illuminated by the flickering light of our campfire stood my father’s tired old pony Miranda munching contentedly from her feed bag filled with fresh sweet hay. And, as all grass-eating animals tend to do, was freely contributing her own loud and smelly efforts to our contest, glad to join in and to be free from the shafts of our families’ heavy old cart, which I had borrowed to carry all of the things Glob and I believed we would need to rescue our friend Byz.

She had complained a lot at first, moodily stamping her hooves refusing to move while neighing, whinnying and rearing up to emphasize her reluctance, stubbornly objecting to being hitched up to the cart until Glob had a sudden brainwave.

Climbing onto her neck and carefully leaning forward he whispered in her ear that her friend Neo would be looking after her for the journey. That did the trick and we were soon underway heading towards the beginning of the forest road to pick up the rest of our party.

Miranda loved the curmudgeonly old cross-eyed goblin with all her equine heart and soul. Whenever she saw him approaching from the shadows of the forest, she pricked her ears and fluttered her huge eyelashes, whinnying like a young filly in love as she trotted over to him with her nostrils flaring and swishing her tale with delight.

Neo, while not having much time for most other living things, loved our old pony in return like the sister he always wished he could have.

Whenever he disappeared, bored with our company, or in another one of his sulky moods, we could usually find him sitting astride her neck, when he thought no one was about, gently combing her hair through his long bony old fingers while weaving brightly coloured meadow flowers into the thick body of her luxuriant mane, as he whispered the latest gossip from the forest in her large soft ears.

And, always, always giving her handfuls of the freshest most succulent grass he could find, unfortunately for her, often missing her soft lipped mouth and sometimes trying to stick the grass in one of her ears as his badly mixed up eyesight meant he mistook them for her mouth on numerous occasions.

But Miranda didn’t mind so long as she could spend some time with her small cross-eyed friend.

The following day after Neo had hitched Miranda to the cart once more, with him sitting astride her neck gently whispering directions in her ears while Glob, Make, Mous and I sat on the cart behind, we set of to find Byz.

We had travelled only a league along the path, shouting and whistling hoping to attract a response from Byz, when Miranda stopped suddenly and sat down on her haunches between the shafts of the cart refusing to go any further, with her great ears twitching frantically to and fro, despite Neo’s pleading with her.

“I can’t get er to stands up no matters wot I sez to er,” Neo said shaking his head, totally at a loss as to what he could do next to encourage the seemingly stubborn Miranda. He tried waiving fresh bunches of her favourite kind of succulent grass in front of her. He even promised to come and live with her in her stable – all to no avail.

Reluctantly we decided to begin the process of getting her out from between the cart’s shafts when, she suddenly stood up, her large ears now twitching left and right, and, letting out a whinny of delight, took off at a fast trot with all of us hanging on for dear life as the old cart bounced along the forest path threatening to spill us all onto the ground.

Around the corner in a small clearing Miranda suddenly slid to a halt beside an old rotting tree stump, causing us to fall in a jumbled heap. Her large ears had allowed her to pinpoint the sound of Byz’s loud snoring echoing through the forest.

After we had extracted ourselves from the tangle of arms, legs and the broken mead pots that littered the cart’s tray, guided by the snoring, we found him curled up in a ball on a bed of dry leaves at the bottom of the hollow in the stump with that simpleton’s smile spread across his face.

On the way home we asked him why he had stopped where he did. It turned out he didn’t get very far simply because he forgot why he was going north in the first place so he decided to lay down to take a nap for a while to think about it, and the rest of the story you now know…

I Live for my Dreams