Students looked away from their projects to their comrades. “Did you just lose power?” they asked each other. Office doors swung wide. The advanced students and those with the prestige of office space squinted up to the glowing neon lights and cursed in a variety of languages. None of them were British. 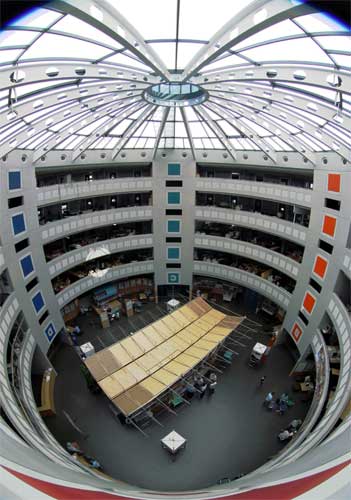 “It’s the storm,” suggested an undergraduate working on her final project.A German man glowered. “Storm? There is no storm.”“Have you been outside recently?” the young woman replied. “Have you even been near a window leading to the outside world?” The young German man with the office without windows frowned. “No, I Haven’t.” “Me neither,” the young woman shrugged. “Just seems probable that a storm would have caused it. ”The German shook his head briefly, confused. Before he mustered a response several professors burst into the laboratory with flapping ties. “Who did it?!” one of them shouted.

“Obviously wasn’t you,” the middle aged mustached man said to the German. His thinking was simple: Germans never do anything wrong. They work hard; they’re perfectly well behaved and he had recruited them all himself – innocence guaranteed. The group of them gazed around the room. An old, recently divorced for his third time, overweight professor suddenly declared, “It’s that Czech woman! Where is she?” He felt a huge sense of validation at finding out that there was a woman at the source of the problem. “She’s not in,” said her Australian aboriginal office mate. “I haven’t seen her since half eleven.”

One of the electrical engineers that vaguely recalled how he’d unsuccessfully tried to chat her up the previous weekend spoke up. “She’s been seen with strange people lately,” he began, his mind thick with the latest conspiracy theories. “I’ve seen her with two physicists, a robotics man and one of those philosophy people.”“Well,” said one of the other supervisors as he patted his tie back into place, “who else is missing?” “The Austrian!” declared the German. “Not in my laboratories, not at this university,” the most tenured professor shrieked nervously.

Since the turn of the 23 rd century there had been what he felt to be an insane devotion to wildly unlikely experimentation in the department. The EU, pushed along by what the North Americans kept calling ‘the New Enlightenment’, had succumbed to a massive influx of investment from private sources. No one understood it, as far as he was concerned. The Age of Fossil Fuels was over. Lunar and Martian colonization were booming. The global and extra-global economies were very changed. The young were euphoric with optimism. Options for travel and adventure grew like wildfire – on and off world. Interplanetary transport and growth were political mandates. The Futurists had gone green and the Greens had gone Futurist. This political and cultural combination made it an era of playful creation and exuberance.

Two of the doctoral students ran off to check the main circuitry. Three of the other students furrowed their brows and decided to pore over the computers, thoroughly covering every nook and cranny in search of the problem’s cause.The professors continued to snarl, wince and bicker. They were rather overworked and tended to be combative, always on the look out for how someone else’s  students were mucking up the entire department. Unbeknown to most of the students,they were having union problems and were under severe pressures from the administration to radically alter the syllabi for courses in all manner of engineering sciences. The university was also facing waves of interdisciplinary interests from potential students, which was complicating the amazing supply of financial backing from private industry. This made their lives very difficult and the strain showed.“It’s that blasted ‘Philosophy of Discovery’ module!” one of the professor complaints. It was part of a course that criticized, reviewed and proposed alternative methodologies in research. “Do you know, I’ve actually received an application from a terrifyingly well funded M.Sc. In Philosophy – of all the bloody subjects, to do some psychopathic experiment in telepathic navigational systems for the lunar shuttle?!” “Good God,” retorted another fellow, “who could possibly supervise such a thing?”

“That’s just it,” the man continued, “the application came with an ominous letter from Boeing, offering $350,000 to pay to find and retain both a supervisor and external examiner if necessary. The student suggested a former CIA agent from a section of thatAgency which is only rumored to exist

!”“You think that’s bad,” another, younger professor of engineering said. “I got anapplication from someone currently at MIT who is absolutely desperate to follow a traditional British program – except that she needs enough laboratory space to work with fission due to some little projects the ESA has her on. Worse still, she sent some form that apparently says that a uranium license can be obtained. I don’t know about the rest of you, but do you know what will happen to my insurance rates if I have to tell my physician that I work with 7 kg of uranium?”“This cannot happen,” the eldest of them said. “It is not possible. Do you understand; such a thing is not possible. It will not occur – not at this university.” His blood pressure had risen dramatically over the preceding 2 years. His problem was that impossible things happened in his university with increasing frequency.Meanwhile, in the student bar, the Czech woman sat with her office mate, whohad found her after leaving the lab and the frustrated supervisors. “You want to what?”he asked. Although he did not tend towards either paranoia or conspiracy, he was quite skeptical. “Amplify your mind and get a few readings, “ she told him through her accent. “It Shouldn’t be difficult and certainly not painful.” He thought it sounded like the worst chat up line in history. He couldn’t understand why she might not say so, even if she wanted him. It was the 23rd century after all.

“Why,” he said flatly.“I just need to run some tests,” she answered, oblivious to his imaginings of a come-on line. It wasn’t that she found him ugly, but she had more interesting things on her mind. “I know it sounds stupid, but it just might be that annoying little variable which is messing up my equipment. If not, I won’t have wasted much time, and if so -well, then I’ll have to discuss a change in materials with my supervisor.” She was drinking half a pint of stout. The two of them had been sharing an office for several weeks. Before he showed up, her equipment ran perfectly. Since his arrival one peculiar little bug had repetitiously shown up in her systems. She had tried correcting her software and all the other ordinary solutions already. She had concluded that the problem was simply – him.There was a strange humming sound, a scuffling noise and a loud cry of triumph from just behind the door of an electron microscopy lab.

The two office mates rose and went to look. The lab was directly across the hall from the on campus pub. From the mechanical laboratory down the hall, the other group rushed to the scene of the ruckus.Splayed out on his front side, lab coat opening out beside and behind him like a pair of angel wings was the German doctoral student. “Caught the little bastard,” he growled,trying to decide whether or not to squeeze it to death. It was in fact, a mouse. “Kind of an old fashioned solution to this particular problem,” noticed the young researchers. “Yes,” said the oldest professor. “Let us keep this in mind – not to let our imaginations get the better of us in the future. ”The German’s recruiter grinned with relief. “Well done!” he proclaimed, jostling his tie.The young woman who had suggested a storm might be the cause brought a rubbish bin and helped to escort the student and the rodent out of the building. Of course she knew better than to kill it. They both did. The young German was literally blinded by the natural daylight.