Thud, thud, thud-a conviction consumed knock resonates from the exterior of Ms. Felicity Freeman’s apartment door. She mutes the TV, fastens her night robe, and haggardly treads towards the banging sound of a mysterious knock.

Ms. Freeman catches a glimpse at the microwave clock as she gets makes her way to the door realizing its 3 a.m. and far too late for an expected guest to stop by unannounced.

“Who is it?” Felicity winces in a hollow tenor. 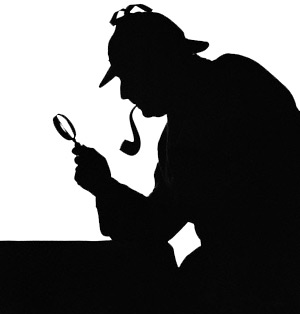 Indiscernible murmuring seeps through the sound waves at a low decibel.

“Who is it?” Felicity whimpers with a heightened sense of concern dripping off each syllable’s cadence and trembling elocution.

More cryptic muffled utterances break into fragments of words buffered by the door between them.

“Who is—Never mind, I’ll just…”, Felicity truncates her sentence while simultaneously leaning against the door pressing her grey sun-strained eye above her left crimson colored cheek against the peephole, sneaking a peek at the disturbing visitor.

A 6-inch steel nail was violently hammered through the peephole, piercing her cornea and splitting the front of her skull.

She falls to the floor, lifeless, dripping blood in a halo shape around her corpse’s cranium as it leaks like a broken faucet from the cruel cavity driven into her eye socket.

A photographer tries to sneak past the ribbon but a blue uniform with a copper badge by the name Officer Frank (everyone calls him Frank, everyone, even local store clerks). So Frank impedes his intrusion.

Another unauthorized person limbos under the tape like it’s a wrestling ring rope and he just got tagged in but the same officer (Frank) brutally rebuffs the civilian’s attempt to enter.

The unidentified man reaches in his vest pocket of his custom fitted 3 piece pinstripe imported suit.

Officer Frank unfastens his gun holster and stiffens as if he has rigor mortise.

Suddenly it breaks with a sigh of relief as the officer realizes the man in the suit is not wildly reaching for a weapon but instead calmly flashing an NYPD Homicide Unit Badge.

“Sorry Detective” stuttering from the lips of the young faced and clearly shaken officer wearing a uniform, “I thought…”

“You thought one homicide was a slow night, kid?” Get me some coffee and try not to shoot anyone while they reach for the creamer. Can ya do that or should I ask the person with the toe tag to go”, shrieked Detective Albert Alexander in a feigned cold and metallic feeling cantankerous husky gruff.

“No sir, I mean yes sir, I mean, I’ll be right back with your coffee Detective” fumbles from the fluttering scatterbrained thoughts of the fledgling cop.

As the newbie jets off, a 30 something, slender, chestnut color haired women with a long jacket, short skirt, and high heels named Emma Alexis marches up to her partner and superior officer, Det. Albert Alexander.

“Where’s he hurrying off to” inquires the incandescently stunning woman, Emma.

“Getting us coffee” ripostes Albert monstrously.

“Let’s hope he doesn’t shoot anyone while they reach for the creamer. You’d have better luck sending the victim wearing the toe tag” quips the vivacious vixen acerbically.

“That’s the difference between us. You just don’t trust people with the sort of warmhearted support that I do”, grinning a contemptuous smirk.

“No the difference between us is I notice when my partner is listening to my entire conversation. A tad unobservant for lead detective, no?”

“Not at all, Det. Alexis. I was simply seeing how much the closed apartment door diminished the volume of a speaking voice. Since the door was shut and you heard me fine, it’s a prudent postulation that the killer whispered to coax the murder victim to line up with the peep hole on his whim so he wouldn’t miss.”

Albert scans the apartment. He finds an inhaler beside the door with the words “Pharmacy Insurance Guaranteed” scribed on the side.

“How’d she afford such a nice place, Albert?”

“That’s what I want you to find out. Do a full back ground check on Ms. Felicity Freeman. Find out where she worked, if she had asthma, and try to puzzle together why her microwave clock is stopped at exactly 3?”

Dispatcher reports a code 412 at the coffee shop around the corner over the police frequency.

“Looks like someone reached for the creamer around the rookie.”

The rookie walks in holding 3 cups of decaffeinated with a smile on his face, “Look how you handle a fake 412, should I have asked the corpse to respond? But, you’re right, he had to whisper to get her to use the peephole, and those doors are paper thin.”

“No need, the place is full of them. I checked her wallet and according to her business card she manages some sort of emporium specializing in just straws. I guess it pays well, besides the broken microwave clock, this place is a gem.”

“Not Hank, not Frank, it’s um…Fred” guesses with trepidation quivering from empty mental rolodex of names held in the mind of the seductive partner, Det. E. Alexis.

“No it is Frank, , not Hank, and definitely not Fred. Doesn’t even rhyme with Fred. Next you’ll call me something less like Frank, something like-I don’t know? Like stupid, like um-uh-err, like…Ed?”

“Yes thanks Ed” chimes in Albert.

“Sure, sure, by the way I didn’t shoot the anyone with creamer and maybe it’s because he called me Frank!” groans Officer Frank.

Fran Lewis Feb 4, 2011 2
How Many Itis's Going to the doctor can really try your patience, sense of humor, and stress level. Ever go to the…
Publishing