It was Friday night and time for the television war yet again. The never ending argument was about to begin in the Montague household over the ownership of the television remote control.

Chuck’s position was that it was the penultimate game before the grand final, and besides, as the head of the household and sole breadwinner it was his right to choose the programmes they watched.

Debbie argued quite logically that tonight’s episode of the soap opera was the cliff hanger ending to the current series, and anyway he could watch the game equally well on the other television in the bedroom.

As usual Debbie nagged, pleaded, sighed loudly, stroked his hair, kissed the lobes of his ears, and talked incessantly in a loud voice about nothing and everything, using anything she could think of to make Chuck’s enjoyment of the game evaporate t 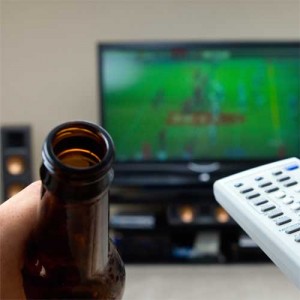 o get her own way.

When that didn’t work she briefly left the room before returning with the vacuum cleaner and began meticulously cleaning the carpet directly between the couch where Chuck sat with the remote control firmly fixed in his grip, and the television.

She constantly walked in front of him rearranging the position of the coffee table and the magazines on it, repeatedly making him lift his legs as she poked the business end of the vacuum cleaner under the couch, doing anything and everything to obstruct his view of the game while regaling in her most annoying tone, the events of the day.

Despite his best efforts to shut out her continuous annoyingly loud monologue and the noise of the vacuum cleaner, gradually Debbie’s relentless audio bombardment destroyed his concentration. In sheer frustration and anger he pointed the remote at her like a weapon and hit the red button, telling her to “just shut up for Christ sake!”

What happened next stunned both of them as Debbie was instantly struck dumb!

Chuck’s attention quickly returned to the game with not the least concern for his wife’s current predicament. At least now he could watch the game without her constant noise making.

Debbie stood rooted to the spot crying silently with her hands stroking her neck, for the moment totally preoccupied with having mysteriously lost her voice.

Chuck was by now concentrating on the game. As he at last relaxed he put the remote down to watch the play.

Debbie soon recovered from her lack of voice and in her anger she sat down heavily on the couch beside him before picking up the remote to change the channel back to her soap opera.

Chuck reacted equally angrily, reaching across her in an attempt to snatch the remote back from her.

In the vigorous struggle for physical control over the remote Debbie’s finger inadvertently pressed the blue button. She watched with a mixture of horror, revenge and delicious satisfaction as Chuck evaporated in front of her eyes.

Still angry and not the least bit concerned that her husband had vanished she settled down to watch her soap. For the next hour she was totally engrossed in the final scenes of the programme when just before the soap ended and the credits began to roll down the screen, she disappeared to.

Smokey congratulated herself. She smiled her enigmatic feline smile while purring with contentment as she began licking her fur; meticulously grooming herself after retracted her claws.

Amanda M Thrasher Feb 8, 2017 0
Find your Own Voice I am a writer first and foremost, author second to that. If you know me or have heard me…
Publishing