From “The Fish the Fighters and the Song-girl,” by Janet Morris and Chris Morris, a new Sacred Band of Stepsons adventure in Sanctuary and beyond.

Amid a nameless wilderness, Tempus and eleven of his cavalry clustered for warmth around their campfire, mounts tethered nearby.  This Sacred Band cohort had left its last posting in Sanctuary by cloud-conveyance, headed for Physca to regroup.

And ended up elsewhere.  Not even Tempus knew where, or why.  Yet.

Lost?  His Sacred Band of Stepsons served at the pleasure of Enlil, Lord Storm, god of the armies, who had his own supernal plans.  Not lost, then:  diverted for celestial purpose.

So they could be anywhere, anytime:  Chaetae, Thrace or even Pelasgia.  Forests and plains often look alike; empires expand and contract.  “We’ll know soon enough, when the storm god pleases,” Tempus had told Nikodemos, and Niko told Critias the same, and Crit told the rest.  Now everyone was uneasy, as warriors always will be when the gods take a hand.

Traveling by way of heaven’s clouds, anything can happen.  Enlil is a trickster god, and Tempus ever suspicious of his tutelary’s motives.  Whatever Enlil has in store, the god in his head remains silent, barely breathing, just an echo in his thoughts. 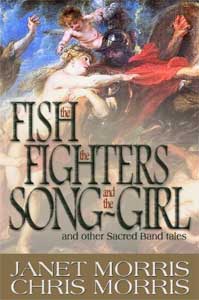 The night sky above is clear, sparkling with stars; uncanny – for the storm god of the armies brings rain and wind, thunder and lightning with him, always.  Always, but not this time.

The squadron talks and laughs too much.  Lovers and beloveds, partners and divine friends must show themselves brave and bold in the face of the unknown.  These are some of his best Sacred Banders:  Stealth, called Nikodemos, Tempus’s rightman; Fox, called Critias, the Band’s task force leader; and Crit’s partner, Ace, called Straton; the rest, hand-picked heroes all.

Straton was poking at the fire with a long branch when a twig snapped in the brush, and then another.  Fighters sought their bows, their shortswords, their cavalry lances, shrugged into their shields.  Golden Lysis, horsekeeper, ran with spear in hand, full tilt toward their mounts.

Then the youngest of their party emerged from the undergrowth with an armful of wood and wild eyes:  “I saw something,” said Arton, lips blue and teeth chattering.  “Out there.”

Cavalrymen grumbled, relieved that their own sentry, not an enemy, had roused them.  Returning from the horse line, Lysis saw hawk-faced Arton, paused, and snorted softly.

First blooded at Chaeronea, Arton was a budding seer and Lysis’ partner.  These newly-paired Stepsons had begged to join the advance party, volunteering to tend horses and warriors’ needs.  Tempus had allowed it; seasoning was what the pair needed.

When none responded to him, Arton insisted:  “Sirs, Commander, I need to tell you what I saw.”

“An apparition appeared to me.  It spoke.  It said, ‘Here lie many kinds of creatures who speaketh like men.  But be ye warned, adventurer – some are not like you at all.  What’s done and undone can swap places, if the wrong song is sung.’”  Arton peered around at the fighters listening, then continued:  “This thing had the head and breasts of a woman, the body of a lioness, the wings of an eagle, and a serpent-headed tail.  I thought it was posing me a riddle but before I could answer, it disappeared.”

Pairs whispered to one another, exchanging knowing glances.  Arton might be young, but his foresight was valued by the Band.

“‘If the wrong song is sung’?  No singing, then.  I hate obscure warnings,” decreed Straton, the Stepsons’ interrogator.

“Riddles from a woman’s lips, lion’s body, eagle wings and a snake-headed tail:  Arton saw a Greek sphinx.  We’d heed an omen like that, back in Thebes,” said Simias, putting a protective arm around his curly-headed partner, Perses.  The youthful poet Perses for once was speechless.

From the north and east, a sudden wind begins to blow; nothing ominous yet, just a low susurrus that rustles leaves and trills on Tempus’s nerves.

“Do you think this warning is for men only?” asked brash Dikti, right-side partner of Breisis and one-half of the squadron’s only female pair.  “Arton said ‘like men.’  So are Breisis and I immune? exempt?”

“This riddle’s for fools only,” Breisis said sharply.  “A vision, seen by a boy sentry in the woods at night, and warriors take it to heart?  Is this the Unified Sacred Band or a school outing?  Commander, you are called ‘the Riddler.’  What say you?”

“I say we’re in country strange to us.  Niko, what does your maat say?”

Maat:  Niko’s Bandaran mystery of balance and justice, whose secular adepts fight for order in a disordered world.  Tempus looked at his rightman, lover of the Theban goddess, Harmony.  The sky above Niko’s head still sparkled with stars but an army of clouds was on the march, east to west.

Stealth called Nikodemos replied, “Commander, my maat says truth is found by striving every day.  Arton saw something.  I don’t doubt him.  Or that we’re not where we’d thought to be.  But I say go forward cautiously until we find our way.  We’ve faced stranger than this with less concern, a hundred times.  Maybe it’s the stragglers’ influence, some echo of Meridian, calling to its own…”  Niko looked at Dikti and Breisis coldly:  two stragglers, Lemnian-born mercenaries recruited by Critias after the war was won, their loyalties as yet untested.

“Is that what you sense, Niko?  Residual strangeness in the proportion?” Tempus said, very low.  “If so, well and good.  Let it come.”

Niko shifted slightly, feeling for his shield and bow beside him in the grass.

When the Sacred Band defeated the army of Meridian, they loosed unpredictable forces on an unsuspecting time and place:  revenants and relics of empires lost and to be lost.  So Tempus had ordered his cadre north, hoping the vanquished would follow; even brought Breisis and Dikti with his men to help lure other stragglers in their wake.  Whatever awaited his Stepsons in the aftermath of the Great War, they’d face it squarely, but face it upcountry.

In open country, where ghosts were few and memories fewer still.  Far away from too many women and witches and goddesses and compromises, Tempus’s fighters would fare better.  And Enlil had agreed.  They would sortie to Physca, and from there to Lemuria where a broad strategy could be planned, repercussions evaluated.  So what was this sojourn of Enlil’s into a realm unknown, where the first being they’d met was inhuman?

“Stragglers, is it?  Following us?  We beat them last time.  We’ll beat them again,” said Straton.  “A little brisk skirmishing’s just the thing to keep us on our toes.  But first, Arton – and Lysis – dish out our dinner.  Heroes need to eat.”

“Yes, eat.  No portents tonight,” said sharp-tongued Dikti as Arton and Lysis began ladling a steaming stew.  “Critias, Straton:  give us a tale of stirring exploits, bold Stepsons, to raise everyone’s mettle while our supper cools.”

“Tell us a tale to raise more than mettle, Strat,” Crit suggested with his sly, cynical smile, trying to improve the mood in the camp.

A pair who’d been with the Band from earliest days caught Niko’s attention, iron-eyed and somber.  Niko leaned a bit closer to Tempus and said under his breath, “Riddler, remember what Arton said.”

Tempus merely nodded.  Beside him, Nikodemos was strung tight as a bow now.

“A tale, as you command, Critias.”  Strat rubbed his bearded jaw.  “What story, then?  How about telling how we came to recruit our two ladies of the point and the edge?  That’s heroic in itself…” proposed Straton in his most rumbly, confidential voice, so the words mixed with the thunder coming near and nine fighters leaned forward to hear him….

Janet Morris's first novel, High Couch of Silistra, was published in 1977. She served as research director at the US Global Strategy Council, where she drafted the Nonlethal concept and Nonlethal weapons concept papers, and Adjunct Fellow at Center for Strategic and International Studies; subsequently she formed M2 Technologies, Inc., and was a member of the Council of Foreign relations task force on Nonlethal Weapons and Capabilities. She authored more than fifty books, stories and nonfiction papers, many with her husband, Christopher Crosby Morris. She is publisher and editor at Perseid Publishing.