The park was filled with the riotous joy of Fall’s bright colors.  The morning sun, bright and clear, seemed to make the colors glow in neon clarity.  The wind was still.  The park silent.  Serene.  Tranquil.

He sat on the park bench, legs crossed, the morning paper in his hands and in front of him.  But dark black eyes of a viper turned the moment he heard the sound of a shoe stepping onto gravel to his left. 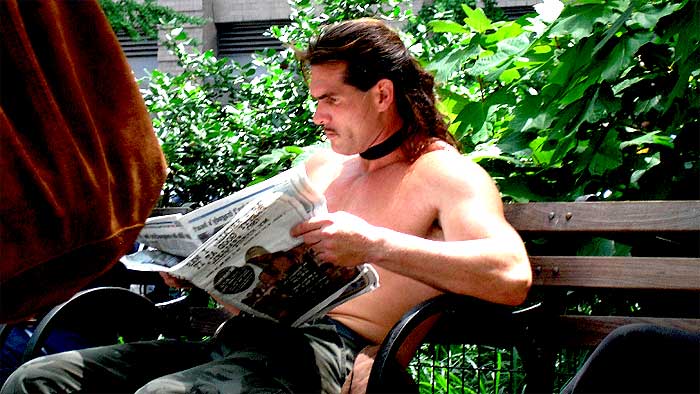 Two young girls, no older than twelve or thirteen, were walking side by side down the path toward him.  The girl with the dark brown hair pulled back into ponytails had her head down and sobbing quietly.

Her friend had a hand over the sobbing girl’s shoulder, a look of genuine concern painted on her face.  Both girls were small framed.  Fragile.  But with the promise of stunning beauty if allowed to grow to womanhood unharmed.

Dark eyes watched the girls . . . watched the sobbing child . . . and then returned to the paper in front of him.  But years of caution—of danger—of death would not cease his vigilance.

He listened from behind the news and heard the two girls slide onto the park bench opposite him.  Listened as the girls began talking in the soft voices of conspirators.

“. . . and then Dad went crazy.  He ripped the belt from his trousers and started beating us.  Beat me and mom.  Just kept hitting and hitting us.  Mom pleaded.  I cried in pain.  But . . . but (sob). . . he just kept on beating us until finally Mom fell to the floor and passed out.”

“My God!” the second girl whispered, her voice filled with pain, terror . . . and fascination.  “What happened next?

“Dad stared at Mom.  Stared for a long time and then he dropped the belt from his hands and ran. Ran out the kitchen door.  Debbie . . . Debbie . . . is there a God?  If there is, why does He let things like this happen?  What did we do to upset Daddy so? We must have done something terrible.  If we did I . . . I need to know.”

For some moments the child cried in quiet spasms of sheer agony—her friend beside her at a loss to offer comfort.  When the sobbing lessened the girl cleared her throat, wiped a tear from her cheek, and spoke quietly.

As he listened, keeping the paper up to block his view, he heard the girls get up and start moving down the gravel path.  Lowering the paper black pits of infinity watched them disappear around a corner; eyes narrowed thoughtfully, words from the girl ringing in his ear over and over like a stuck recording.

Quietly he folded the paper neatly and laid it gently on the bench.  Slipping dark shades on he realized he had an appointment . . . an urgent appointment . . . to keep.  One that could not be rescheduled under any circumstances.

Don’t ask.  Don’t need to know.  Just remember there are some men with unique talent. The talent of a hunter.  The talent to track down their prey and corner them in a position allowing no escape.  He found the man in question sitting alone on a bench in an empty bar in an even emptier part of town.  On the table in front of the man was a half-empty bottle of booze.

In his hands an empty glass.  He looked like hell.  A week’s worth of black stubble smeared with gray littered his face.  Red rimmed, tear-filled eyes stared dully at the wall.  His clothes reeked of cigarettes, booze, and sweat.  If a man looked like he was waiting for death this wreck was.

He slid into the seat opposite the wreck and placed both hands on the table.  One of them was partially closed as if he was holding—hiding—something in it.  At first the wreck . . startled . . jumped in surprise and focused his eyes to stare into the stranger’s face.  But one look at the black eyes and a shudder of a fugue danced across his soul.  Death indeed had a face!

“Ready for what?” the wolf asked quietly, his hands not moving.

Haven’t had a job in months.  The car’s been repossessed so even if I did get a job I couldn’t get to work.  Bills unpaid and collectors threatening to take me to court.  Can’t even afford to pay for baby’s lunch bill.  So do it, fella.  Kill me.  I deserve to die.”

Death stared at the wreck for some seconds and remained motionless.  And then a flicker of a thumb and a loud snap! and suddenly the long, sharp edge of a switch-blade materialized in his hand.  Lifting the knife up Death used the tip of the blade and slid a paper napkin across the table toward the wreck.  On the paper in black ink was a phone number.

“You’re a lucky sonofabitch, fella.” Death said in a hard voice.  A mean voice.  “You’ve got something I lost a long time ago.  You got people who love you.  Who think they’ve done something wrong.  Shut up and listen carefully.  Here’s your last chance to get it right.  Last chance to make up for what you did.  Call this number.

By tomorrow you’ll have a job.  Honest work.  Honest pay.  Do it tonight, fella, ‘cause the next time we meet you’ll get that last wish of yours.  Promise.  Call the number.  Take the job.  Tell’em Smitty said so.”

Death slid out of the booth and dropped the folded switch-blade into his slack’s right pocket.  He didn’t look either right or left as he slipped on shades and walked out of the bar.  Out into the night.  Into the hard world he was familiar with.  Into oblivion.