The least bit of activity raised up a sweat. Much needed yard work left him dripping wet, a bit dizzy and exhausted by the dog day’s sweltering weather. But now the promise of relief was riding the wind and roaring in as he watched the lightning bolts stab at the earth on the other side of the mountain just to the west. Taught by many previous storms he knew he had several minutes before this one hit so he stood shirtless in the front yard mesmerized by the yellow arcs etched on dark blue and counted by one thousands in anticipation of the rolling, ground shaking thunder to follow. 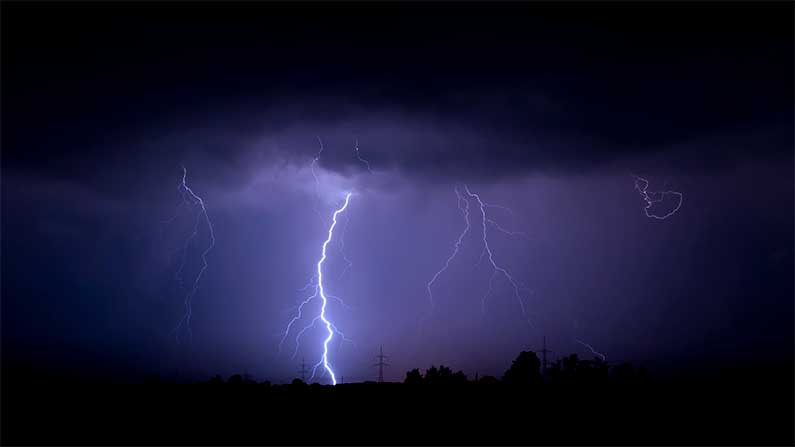 A sudden cool breeze raised goose bumps on his flesh and terrified the leaves in the old silver maple as the first lightning bolts flashed to the ground on his side of the hill. They were followed instantly by the high pitched crackling that crashed into a deep boom rumbling across the sky, the signal that he had but a half minute more.

Each child was manning an open window waiting for the rush of cool air in front of the storm that would purge the house of the stale afternoon air. They would have to be quickly closed on the weather side just after the first drops fell but before the torrents came down that would drench sills and curtains if given the chance. The first few drops splashing on his hot skin sent a shiver up his spine and hastened him into the house just as the full fury of the storm roared in overhead. Wind driven raindrops exploded into the dust or bounced onto the roof joining to form wavelets that washed into the gutters and on to the downspouts.

Lightning  flashed, thunder boomed and lights flickered out as the high wind, twenty degrees cooler than before, stripped leaves and dead branches from the trees, blew the rain sideways to drum on the windows, and tore at some shirts frantically hanging onto the clothesline, forgotten in those last moments and now fending for themselves. A cacophonous mixture of sounds assaulted the family’s senses as the storm raged. Constant drumming of heavy rain on the roof and the tin topped wood shed out back, the howling of the wind driving the storm onward, the sizzling, air splitting flashes of lightning blinding for an instant, the flood of rain racing down the downspouts, and the window rattling ground shaking thunder claps kept the family huddled in the dark for the next twenty minutes grateful for the coolness that would soon follow but a little frightened at the awesome power whirling around them. Anxious now for the storm to be on its way and wanting to go soothe the German shepherd quivering in the tub they stayed close to each other quiet and subdued.

Then as quickly as it had come, it was over! The storm passed on roaring its way down county taking wind and rain with it. Lightning flashes lit up a distant sky to the east and the thunder tapered off to a muffled rumbling twenty, thirty and forty counts away. The rain diminished to a light shower then stopped altogether. A cool clean breeze drifted in behind the tempest and patches of blue sky with shafts of golden sunlight broke through. Gone were the musty, stagnate smells of August summer replaced now by the sweet smell of air scrubbed clean and the odor of dust free vegetation soaking up the moisture. Waning daylight reflecting off the remaining clouds created a dazzling sunset as an epilogue to the day. Tree frogs and crickets began their evening symphony and the first fire flies began blinking their code of seduction. The soft evening stillness that now settled in was interrupted only by the sound of water dripping off the trees and a morning dove’s song at sundown. Sleep would be refreshingly possible tonight.