The Verbal Squatter:
Thabo walked down the line of cars waiting at the traffic light, trying to make eye contact with the drivers. He found that he sold more newspapers if he could somehow connect with his potential customers.

If they returned his glance he gave them one of his cheerful two-second smiles while allowing his eyes to drop towards the front-page headlines. If the occupant of the car followed his gaze downwards he would move closer to the window to give them a better look at the news of the day. If he got this far he usually made a sale. If they did not respond within the two seconds he moved on. He could not waste time on people who dithered. 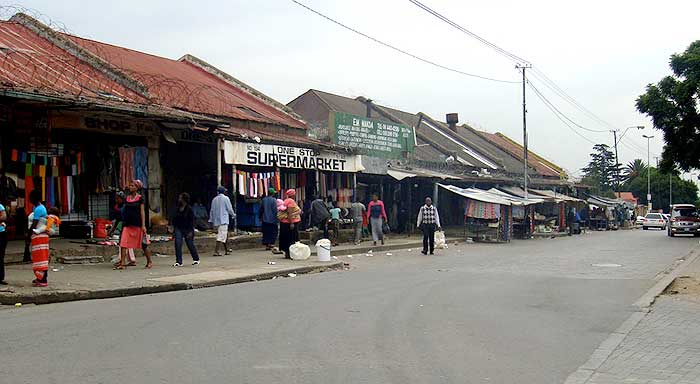 The light would change to green soon and the cars would move away to be replaced by a fresh batch of prospects. There was not a lot of money to be made this way but it was better than begging. At least he had something to take home at the end of the day with which to buy food. Every day he stood like this in the traffic, from the beginning of the morning rush hour to the end of the evening one. It was that time now as the traffic began to thin out and the noise reduced. He decided that there were unlikely to be more sales today.

With sagging shoulders, he packed up his remaining newspapers, retrieved his jacket from under a shrub on the traffic island and started walking. He travelled six blocks to the rank where he would find a minibus taxi headed for the black townships south of the city. Once the taxi was squeezed full to the point of being slightly overloaded the driver set off. Thabo had been fortunate enough to be amongst the first to board and reserve a seat by the window. He enjoyed looking out at the houses and dreaming. The taxi passed through several upmarket suburbs then lumbered down an on-ramp and joined the M1 South.

The homes of the upper middle class were still visible standing distantly off to either side but they now had a detached feel. Thabo turned his attention instead to studying the traffic passing by. The freeway snaked out into a more commercial area and became the top level of a triple-decker section, a scalpel cut through the heart of the city. From his vantage point Thabo gazed out into this blackened and diseased heart.

The dirty, broken windows and peeling paintwork bore silent witness to the inner city decay from which Johannesburg in common with many of its cousins on the continent suffered. This imposing, if rather decrepit, view failed to impress the other occupants of the vehicle. Mostly they wore a tired, jaded look – induced by early mornings and long hours of work and travel. The taxi stopped outside the imposing Chris Hani Baragwanath Hospital (Bara to locals). Thabo climbed out and started the long walk home. As he walked the familiar sights and smells of Soweto surrounded him. He instinctively placed his hand in his pocket over his wallet when passing a group of Tsotsis on the
opposite street corner.

The smell of roasted meat hung on the breeze, teasing his hungry nostrils as he approached another street corner. A local woman cooked whole sheep head over an open fire for sale to passers-by. This dish was often referred to as Smiley, because of the way the sheep’s lips curled back during the cooking process, giving the impression that the lifeless head was grinning at you. This was just one example of the quirky sense of humour of the townships, referring to chickens feet (another popular local dish), as Runaways was another. Finally, tired and weary, Thabo arrived outside his home. As he passed through the gate the sun, looking equally tired and weary through the smog, was just touching the western horizon. Thankfully it was still summer. In the winter the last stretch would have to be walked in the dark, vastly increasing the chances of being robbed of the day’s earnings.

Walking up to the door of the house Thabo could hear the metallic clanking of a spoon against the side of an aluminium pot and the children playing inside. He unlocked the door and let himself in, the familiar smell of burnt paraffin welcoming him. The children were not far behind in adding their welcomes, shrieking and jumping into his arms. Sonto turned from the paraffin stove over which she had been working to greet him. Thabo smiled as the aroma of supper filtered through the air to his nostrils. Pap and chicken stew, his favourite. She had received her pay on Friday, hence the luxury of meat in the pot. Later in the month, it would be back to pap and gravy with a few meaty bones thrown in for taste, or umngqusho (samp and beans) flavoured with chilli or onion. Between her wages as a maid in one of the predominantly white suburbs and whatever Thabo made selling newspapers, they just managed to scrape by.

Sonto had by now finished dishing up the food
onto four chipped enamel-coated tin plates. Holding hands the family agreed with Thabo as he offered up a prayer of thanks for the meal. They ate sitting on the worn and patched lounge suite that was given to them by Sonto’s employers when they bought a new one a few years before.

The sounds of eating were accompanied by music from the cheap battery powered radio standing on a crude shelf in a corner of the small room. Television was a luxury beyond their reach. Besides the house had only two electrical outlets, one in the kitchen and one in the bedroom. Likewise, there were only three cold-water taps in the house, one in the kitchen and two in the bathroom. The kitchen area consisted of a counter running along one wall of the living area, with a small sink at one end. This living room together with the small bedroom and even smaller bathroom made up the three rooms of the house. It wasn’t much but they weren’t complaining. They were far better off than some of their relatives and friends who lived in shacks made of cardboard, corrugated iron and whatever other makeshift building materials they could lay their hands on.

Supper was over and while Sonto washed the dishes Thabo took the opportunity to get Sipho and Disego to show him what they had learned in school that day. This was the only time he had available to spend alone with the children. With him having to leave home very early in the morning and only return home in the evening, Thabo was not able to spend as much time with his son and daughter as he would have
liked, though he did try to catch up on the weekends.

While the children went to the bathroom to wash up and get ready for bed, he pulled out the foam mattresses from behind the couch and arranged them in the middle of the living room floor. Sonto came through from the bedroom with an armload of blankets and sheets. Together they made up the makeshift beds as carefully as they could. After having settled the little ones down for the night, Thabo spent a few minutes sitting in the doorway on the top step listening to the night sounds. He allowed himself to dream slightly of what it would be like to live in the suburbs, with a bedroom for each of the children and a large one for Sonto and himself to share. He fantasised about having a car in a garage like those he had seen in the suburbs. Most of those   garages were larger than his house.

These thoughts stirred him from his seat and propelled him through to the bedroom. There he took out his books to study for an hour or so until he was too tired to concentrate. Sonto’s employers had kindly agreed to lend them the money to allow Thabo to enrol in a correspondence college and deduct it from her salary in small amounts. He was busy with a course in Basic Business Administration, with which he hoped to be able to land an office job. He had plans to show people how hard he could work and how loyal he could be. Hopefully within a few years he would be able to get a supervisor’s job and start making decent money. As he sat on the edge of the bed making notes and summarising he thought once again how fortunate he was to have had the opportunity to finish high school, something many of his peers had not been able to do.