The House in the Glen

Tonight I’m going to tell you the story of a haunted house. This house exists. It was built over three hundred years ago and it’s still occupied by one of the original owner’s descendants. She’s an old woman now and worried that once she’s gone that the house will fall to ruin.

I felt that this was just as well, though I didn’t voice such thoughts. It haunting is an old and terrible one and I couldn’t help thinking that if the house should fall, then maybe, at last, the spirit would find rest. Before I tell you about its sad history, let me take you on a walk through its rooms. I will describe them much as I have seen them and perhaps, though my words you can pick up its atmosphere and if you allow your mind free rein, you’ll hear the whispers of those who have passed, as we flit from room to room.

The house is in the countryside, in a bleak and desolate spot. Now that the men are gone, the grounds are overgrown and other than the small path that lead to the main door, the garden on either side is a green sea of weeds and stinging nettles. It’s a rather ordinary looking house, painted white, it stand out against a backdrop of mountains and a forest of pine trees. Downstairs there are three rooms, a kitchen, sitting room and for want of a better word, a pantry. Here potatoes lie in small mounds on the floor, alongside onions carrots and whatever vegetable is in season. 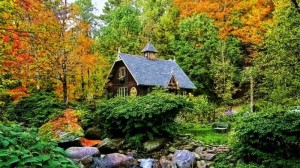 There’s a musty, earthy smell that overwhelms the senses and it is not a room one would want to linger in. A local man digs the small patch the owner sows each year and it provides enough to last her through the winter. Perhaps, now is the right time to give her a name? We shall call her Sally. No good can come of my telling you her real name and I want her to spend whatever time she has left on this earth, unbothered by thrill seekers.

The hallway is long, narrow and pitch black, even during the day. No bulb had ever lasted more than a few minutes though numerous electricians have found no fault in the ceiling socket or the wiring. The ancient flag stones are uneven and one has to choose their steps with care, as they fumble along in the darkness. The kitchen is a huge affair; the only change in over three hundred years has been the addition of an turf burning Aga, where the great fireplace once stood and a small, stone sink with one lone, cold tap. The old flag stones in front of the fire are worn smooth from the centuries of passing feet. The small light fitting overhead does little to dispel the gloom, so the room is always half in shadow. It is here one first notices the thickness of the outer walls. Overhead are three bedrooms, one is known as the haunted room. The story goes as such, and the Sally swears she has seen the apparition constantly throughout her lifetime and right up to last winter.

Over two hundred years ago the owner, we shall call him William, was in love with a young woman, Maud, who worked on the farm. His father forbade him to marry her, as she was considered beneath him and a match was made with the daughter of local landowner, Ruth. The young girl left the district, broken-hearted and vowing never to return. Sixteen years passed, years in which William lived in hell with a shrew for a wife. They had no children and when he received a letter from his old love Maud, telling him she was dying and her only child would be orphaned, he lost no time in running to her aid. He was too late. Maud died just hours before he got there, but she left a note begging him to take care of her child, with the words, “I shall never be at peace, unless I know my child is safe,”

Rosie, her daughter was thirteen at the time and the image of her mother. After the funeral, William took her to live with him at the house in the glen. Rosie was a bright and loving child and for the first time in decades the house was filled with life. This did not please his wife and as the years passed her anger and jealousy burned until it threatened to consume her. When Rosie was sixteen, Ruth arranged it that her path should cross with a local jack the lad. Thomas was as cunning as he was handsome and the purse Ruth offered for his seduction of the young Rosie was too good to turn down.

Within days Rosie was smitten and the outcome was predictable when some month later the swelling in her stomach became noticeable. Ruth was sure that her husband would turn the girl out onto the roads, but no such thing happened. He ordered that Rosie would be kept inside until her due date and them Ruth would claim the child as her own. No amount of screaming and arguing, on his wife’s part, would sway him from this plan and as the girl’s bump grew, so did Ruth’s hatred.

It was the time of the autumn fair, when the last of the trading was done before the onset of winter, when Rosie’s labour pains began. William was away and would be gone for two days, but he left strict instruction what must be down. For hour Rosie lay in agony as the baby, a breech birth, fought its way out of her body. Ruth remained downstairs and listened as her cries grew weaker and weaker. When she finally went up to the room, Rosie was dead and her baby lay in a pool of blood between her legs. It was obvious from the blood staining her hands that she had torn the baby from her body, dying so it might live. It was a little girl that lay nestled in the warmth of its mother’s blood. Ruth later said the child was deformed when asked about its hasty burial in the garden behind the house, but one of the farm lad’s swore he heard a baby cry as he was going about his work.

In later years it was said that Ruth fed the baby to the sows. William, overcome with sadness, did not question his wife’s story, as in those times such things happened, but he was never the same again. The light went from his life and he abandoned the house, passing it on to his brother and went to live alone in a small cottage some miles away. Ruth went back to her father’s house and it’s said that as the years passed, she slowly went mad.

The first record of the haunting began a year after Rosie died. A wraith-like figure was seen peering through the windows on the ground floor. Local swore it was Rosie in search of her lost child. The haunting lasted for a week and always at the same time of year, autumn. When the winds screeched around the house and the fallen leaves slapped against the windows, there was another sound; the tapping of ghostly fingers on the glass and the plaintive cry of a young girl. William’s brother was a no nonsense man and with a young family to support, he thought being haunted one week a year was little price to pay for such a good living. Nothing was seen when the listeners rushed out into the night, and the children came to regard it as a harmless game, though there was no denying the looks exchanged by their mother and father.

Sally told me this story two weeks ago and I have no doubt that its true. Perhaps, it was imagination, but there was a chill in the air that went beyond the normal cold of an old house and I was glad that it’s summer. I can’t imagine what it must feel like for Sally, when the nights grow shorter and the season changes, or maybe I can.

Tuffy and the Thompsons