She was one of the Nameless. Her powers were so strong that she was rightfully considered as a queen of her kin. She spent all her time in her castle hidden in the Shadow Realms.

The Shifter was her sole companion and her messenger. She received countless messages begging her to fulfill wishes. She read them for her amusement. Then she threw them inside a painting of a panther fighting a lion. The beasts devoured the messages, roared and went on with their combat. This time two demands drew her attention.

“A young girl wants to attend the Royal Ball. Her sisters and her stepmother treat her like a servant and won’t allow her to go. Interesting… And this one is from a miller’s youngest son. After his father’s death, his brothers took everything leaving him only a cat. I’ll help them both.” The Shifter, currently shaped as an ibis-headed lord, bowed respectfully. “My mistress is always wise.” “Disdained people rising to the top are the best Dark Knights.” 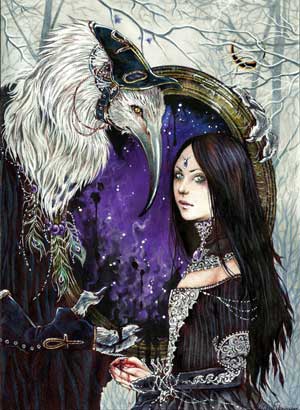 She gave the Shifter a list of items. Before she had time to wink twice, he was back with all she had asked. She reached for her mirror. It was a vessel bearing her symbol – a dark half-moon – filled with quicksilver. Into it she threw three hairs of a Green Lion, a silk white ribbon made out of a unicorn’s mane and a peacock tail. While mixing the ingredients, she pronounced the spell. A beautiful peacock fairy emerged out of the iridescent mixture. Her blue, sapphire-like eyes stared at the queen. “Go and help the servant girl to attend the royal ball. Tell her you are her Godmother. Keep watching over her after she has ascended the throne.”

The fairy graciously bowed and flew away. When the mirror was clear, the queen threw three hairs of Green Lion, two teeth and a few dark silver hairs of a Grey Wolf, a pelican’s heart and a griffin’s claw. The liquid mirror boiled. It became red then white then black. Finally a cat emerged out of it. He was dressed in an elegant velvet and lace suit and he wore red boots. His hat adorned with a huge crow feather cast a shadow on his face. But his bright eyes reflected the poisonous emerald light of the Green Lion.

“I am at your service,” he said to the queen. “I’ll help the miller’s son to become a king and watch over him.” He bowed and vanished as though he was lost in shadows. The queen’s eyes were like black jade. “The girl will become a powerful queen and cause a destructive war. The miller’s son will be a fearsome sovereign. He will ally with pirates and bandits to make his kingdom wealthy and he will marry eight princesses and murder them all.”

The Shifter remained silent. Things had always been this way and there was nothing that could change them. Sending a request to the Dark Queen is easy: all you have to do is to whisper your wish to the wind or to the sea waves under the moonlight. The moonbeams will take the message to the Shifter; rest assured that he will relay it to the Queen. If you want something strongly enough and if you are lucky, there is a chance that your dream will come true. The Queen will see to this. But you have to be aware that there is a price to pay. You will have to follow the Dark Path.