The first time I had the dream, I woke up in a cold sweat. Then the little one cried and I hurried to see what was wrong. I forgot all about the dream and I’d probably never have thought of it again- it was but a nightmare; nothing like your home getting burned or having the little one in hospital, right?

But the nightmare came back. Not every night but too often to be ignored. It was always the same dream, like a movie scene that is repeated or a song you play over and over again: I was in a long corridor lined with mirrors. I had a strong feeling that something was threatening me; I had to pass the corridor without looking at the mirrors. It was dark, so walking without watching the mirrors wasn’t too difficult. There was a dim bluish light at the end of the corridor. Anxious, I kept walking toward the light. I was attracted to it like moths are to flames and even more; the light seemed to be CALLING to me. When I got there, I saw a narrow room and there she was: a kind of she-werewolf. 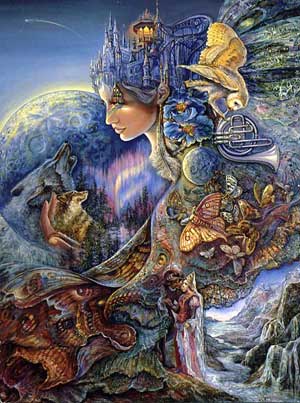 As soon as she saw me she grinned baring her sharp teeth; she stared at me with those piercing eyes of hers and advanced one step toward me. Her orange hair was shining in the darkness. I was terrified; I wanted to scream but no voice came out of my mouth, I wanted to run, but my feet were unable to move. She was holding a little teddy bear by the hand. She was probably going to harm it or tear it to pieces. I struggled to overcome my fear and help the little thing, but this was beyond my forces. Her eyes turned blue, then red then black and I became convinced she would also tear me to pieces. I woke up and I wanted to scream, but I didn’t. I’d wake the little one and it’d be frightened. So I bit my lips till they bled, staying motionless in the darkness, sweating, my heart pounding in my chest like a wounded bird fluttering to escape a cruel hunter.

In the daylight, I tried not to think about my bewitched nights. My job is to clean houses and offices, it’s exhausting. Back at home, I have a lot to do and I’ve got to take care of the little one and watch it all the time. There’s no room for whimsies in my day. But in the night…. the orange-haired she-werewolf was always standing at the end of the corridor, waiting for me. Holding the teddy bear by the hand, she locked her eyes on mine and she scared the hell out of me. I spent more and more sleepless nights to avoid her. Absentmindedly, I was watching whatever was on TV on those late hours while torturing my brain to understand what the nightmare meant. I couldn’t figure it out never mind how hard I tried. As soon as my eyes closed, I saw the werewolf woman’s face; I jerked and struggled to remain awake. I drunk so much coffee that my stomach ached, I played solitaire until my eyes became red and itched. This couldn’t go on this way. Spending so many sleepless nights

would end up ruining me. I’d probably lose my job. I’d also be sick and I couldn’t afford this- who’d watch the little one? Daycare is only open until 3 pm and my best friend has three kids of her own.

I tried to get help to interpret the dream. This could eventually help me face it and even stop it. The doctor said it’s normal for me to see scary dreams; I’m a single working mother. I’m stressed and tired. He added other things, but I didn’t like them – it sounded like I’d be happy to get rid of my kid. I could not accept this; I love the little one, I really do. I don’t think I would be able to live without it. I could not afford to go and see one doctor after another either. I lacked both money and time for this. Then I thought of this woman living a few blocks away from my home. She’s some sort of a fortune teller, but not an ordinary one. I’ve heard she uses bird feathers and butterflies to tell the future and flower petals to explain dreams. Don’t ask me how it works, I have no clue. But after I’d spent three sleepless nights and two more nights of bad sleep because of the nightmare, I would accept help from a demon from Hell provided he didn’t tell me I wanted to harm my kid or get rid of him. So I took the little one with me and off we went to the flower witch. We never reached her place, though.

I was halfway to her home when three men blocked my way. They were tall, well built and their faces were hidden by fox masks. I stopped, terrified; I could hardly breathe. Now, this was bad luck: the men were out of the Fox Gang, the worst outlaws in our ghetto. They were accused of all the criminal activities

you can imagine ranging from murders and robberies to black market adoption, organ trafficking and even providing children and virgins to religious sects performing human sacrifices. Two of them stood in front of me barring my way. The third one advanced threateningly pointing a gun at me.

“Give me the kid.”
“No.” I pressed the little one on my breast staring at him in terror.
“C’mon, ma’am. Give the kid and you may go in peace. We won’t harm you.”
At this point, the argument was over. I am nothing like a warrior woman; I am small and thin and three ruthless armed gangsters were standing in front of me. Any attempt of resistance would result in a disaster leaving me seriously wounded or even dead and they’d take my kid anyway. I wanted to scream and at the same time, I was paralyzed with terror.
All of a sudden, something strange happened to me. It seemed as though I was… transformed. I turned into a wild beast and a giant at the same time. The three outlaws with their fox masks were now like cartoon characters. I wasn’t more scared than a panther facing a mouse.

I thought that all this only happened in my head; it was probably just a reaction to stress. But then two things occurred: I opened my mouth and a beastly, terrifying roar came out of it. The gangster who pointed his gun at me screamed and the two others stood there staring at me in horror, unable to move. One of them tried to shoot me, but before he had time to do anything, I jumped. I did this as easily as a wild feline, holding tightly the little one in my arms. The next thing I remember is that I sat on the ground stroking the little one who was crying. Two of the gangsters were dead; one of them had been shot, the other one beheaded with his body torn in pieces. The third one looked as though a wild animal had attacked him. He was unconscious but still breathing. His injuries were serious. Even if he lived he would never be able to harm anyone.
I rose on my feet and I headed back at home murmuring a song to reassure my scared kid

Later on that night, I was sitting on my bed with the little one sleeping beside me. In the darkness, I was thinking of what had happened with the Fox Gang. There probably was a rational explanation; people say that sometimes when you are in danger you use parts of your brain that are usually inactive. The theory was fine, but… somehow I knew that this wasn’t the right explanation in my case.

Hard as it may seem to believe, I had turned into a were-beast to defend my child.
This wasn’t ordinary either: in the movies and in werewolf stories, people turn into beasts under the full moon and then they kill people. I checked the calendar. It was a moonless period.
I smiled in the darkness, trying hard not to burst into a wild laughter. Werewolves don’t exist for God’s sake! They’re only legends, fantasies, movie inventions…
I was so tired that my eyes closed and I fell asleep. And I had the dream again, but this time it was different. I was walking in the corridor lined with mirrors, but now I stopped to look at the mirror. I don’t see my reflection. The image on the mirror is like those depicting the Madonna holding her Holy Child. Only here, the orange haired werewolf woman was holding protectively the teddy bear.

I am no more afraid; I’ve finally figured out what the dream means

and I know who the terrifying werewolf woman is. I give her a smile and she knowingly winks back at me.
I am now at peace with my weird dark side. Also, my little one will never be in danger. I’ll always protect it.