The moon, its bottom rim just touching the dark silhouette of a barren hill, was a gigantic unblinking yellow and orange eye. An eye seemingly staring unrelentingly at him with a cold dispassionate interest.

A frigid monstrous creature. Maleficent in its grandeur and terrifying in its beauty. Gasping for air, his chest heaving from his efforts, he staggered to a tree and looked up at the silent entity and waited for a nameless dread he knew not. 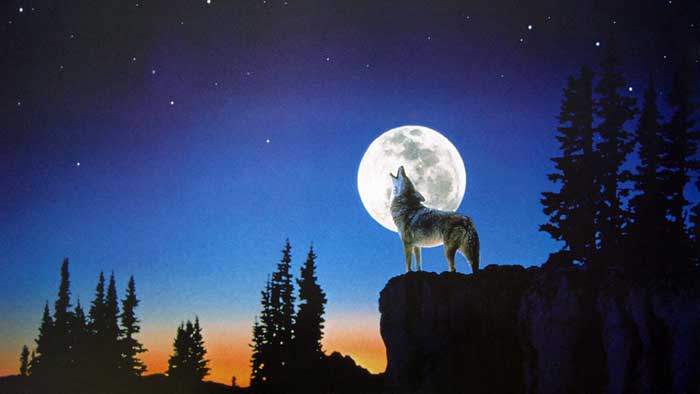 And like silent wraiths they came. Wolves, an even dozen, ran across the top of the hill. The back light of the moon magnifying their incredulous size. But the last one–a gigantic shaggy creature with a pure white coat–paused . . . hesitated . . . and turned to face him.

As if it knew he was here. As if it could smell him. Smell his fear. Smell the sweat rolling off his brow. Hear the pounding heart beating in his chest. Taste the terror filling his soul.

To his ears came the soul-piercing voice of a single wolf howling. A long, drawn out yet hypnotic voice of longing and possession. And then her voice filled his mind. A voice so soft. So gentle. So alluring.

Run Jonathan! Run! Run like the wind, my love. Run until you can run no longer. And when that happens, when you cannot take another step, that’s when you will surrender to me. To your one true love.In the darkness of the night–in the deepest blackness of the forests shadows–he screamed. Screamed a wailing note of sheer terror which lifted into the darkness like some supplication to unseen dark gods. Pushing himself from the tree he began running. Running. Mindlessly running.

It all began innocuously a week earlier. When he cane to this small hamlet buried deep in the Norwegian forest. A hamlet and forest that sat high in the mountains overlooking a ice encrusted sliver of a forgotten Norwegian fjord. He had journeyed all the way from America. Came to this small Norwegian enclave to visit its picturesque native cemetery. To kneel at the grave site of a long dead ancestor; the first of his clan. To kneel and place gently on the snow encrusted mound one single blood red rose.

So he had come.

“You look familiar, stranger. What is your name?”

“Olafsson,” the hag whispered back, a withered hand lifting to the four points of the cross over her twisted, aged frame. “May god have mercy!”

Shaking her head and clicking her tongue she told the tall, blonde, blue eyed man resplendent in his youth to follow her. She led him to a small inn built of stout Norwegian oak. To a room on the floor with a view from its single window of a snow capped hill which was the hamlet’s cemetery.

That night, as he lay buried in a heap of warm blankets, the first peels of wolves howling in the breeze came softly to his ears. A faint yet persistent warble which, curiously, seemed to create an uneasiness in the deepest part of his conscience. A vagueness like something not right–of a chore he should have finished a long time ago but failed to complete.

Merciful sleep did not come to him until the wee hours of the morning.

The next morning he dressed and came down the wide stairs and peered at the empty tables of the inn. Only two people occupied the space–the inn’s proprietor and the old woman he met yesterday. The two of them sat at a small table in front of a giant stone fireplace. Logs, burning brightly and furiously, filled the inn’s floor with a bubble of warmth and comfort.

Both the pale skinned inn keeper and the twisted, warped frame of the old woman with her toothless grin and one dark brown eye watched him as he descended the stairs and paused at the last step and nod to them.

“I will get you your breakfast,” the waxen complexioned, colorless looking man said, rising from his chair and walking away with a strange forward-leaning gait toward the kitchen.

An odd cackling sound of laughter escaped from the leathery lips of the hag as she watched the blonde haired youth sit down at a table directly across from her. Her single bright orb never blinked. Never wavered.

“Ah, the children,” the hag answered, her gray haired head nodding and that cackle of laughter again coming to his ears. “To the cemetery to lay your rose are you going this morn?”

“Why . . . yes, I am.” Jonathon Olafsson answered, a look of confusion on his face as he stared at the creature in front of him. “How did you know I’ve come to lay a rose on a grave?”

“You did say you were an Olafsson, did you not?”

He nodded, and shuddered visibly as if ice had suddenly flushed through his veins.

“A Olafsson heir has come to lay a rose on old Lars Olafsson’s grave for more than four hundred years. An heir from every sixth generation of Olafsson males. You will be the seventh to pay his respects.”

Behind him he heard a shuffling of feet. Turning in his chair he watched the odd looking man set down two large wooden platters of fresh biscuits, sausage, cheese and a large mug of steaming black coffee. The coffee smelled strong and inviting. The food was mouth watering. Forgetting his surprise and uneasiness stemming from the old woman’s inquiries he quickly ate with a voracious appetite.

But, stomach full and appetite satiated, he turned with questions to put to the old woman. But she was gone. Her chair pushed up against the table. The table itself barren of any suggestion two people had sat there moments before. A frown creased his handsome visage. He had not heard her rise from her chair. Had not heard her walk across the floor of the inn. Had not heard the inn’s door open or felt the frigid breath of the morning’s cold he surely would have felt if someone had exited.

Her disappearance was so complete, so absolute, it was as if she had never been sitting at the chair across from him moments before.

“Where did the old woman go?”

“She left to scold her children,” the man answered in a soft voice.

“Her children? As old as she is, she still has children?”

“Aye. Her children never leave her. Never wander far without her being close. Here, here is more coffee. It is cold up at the cemetery this early in the morning. The snow is deep and it will be difficult for you to walk through it.”

With that the odd looking man poured more coffee into his cup and then turned and silently walked back in his odd way to the kitchen.

The ordeal making his way up to the cemetery left him breathless. Behind him in the deep blanket of virgin snow his tracks were deep and uneven. Yet he had come to the cemetery. Come to the grave of Lars Olafsson. Chest heaving, explosions of hot steam escaping form his lips with each breath he took, he sank into the deep snow of the stone cap of the grave and stared at the weathered, odd looking headstone which marked the grave.

Powerful emotions swept through his body the moment he said her name. His breathing begin to labor even more. His throat begin to constrict–unspeakable terror filled his soul.. Panic, mindless and throbbing, screamed in his mind to turn and run. Run from this terrible place. To flee for his life.

Staggering back, reaching up with both hands to clutch his throat, he turned . . .

She was here! Standing directly behind him! The hag! With her one unblinking dark eye staring at him. With both of her withered, skeletal hands clamped together as she stood in the snow not more than two feet from him. Standing there watching him with a small, inexplicable grin stretching wrinkled, leathery lips.

How did she get here? He heard no one laboring through the snow as they trudged up the hill to the cemetery. There were no tracks, other than his, in the snow leading up from the village.

Yet she was here. Here!

“Rowina, the Mistress of the Night, claims the souls of every sixth Olafsson male. A vow your ancient kinsman gave her so many years ago, young Jonathon Olafsson. She will come to you tonight. Come to take you into her arms as she took your grandfather so long ago.”

“Never!” he screamed, staggering to one side and trying to run. “Never, I tell you! Never!”

Ran Jonathon Olafsson did. Ran, fighting every inch of the way through the deep snow, back to the village. And watching him run the hag stood by the grave of her beloved Lars Olafsson. A wicked, evil smile on her ancient, dried lips. Yet even that was deceiving. For as she stood watching Jonathon running a metamorphosis took place. A wind came up and began blowing snow violently around the hag, sending up a white veil which partially hid the old woman from view. In the distance the sound of wolves howling could be heard. Wailing. Longing. Mourning.

But in the blowing veil of snow the unbelievable began to take shape. Age began to melt away. Skin old and worn began to transform into something wondrous. Long gray hair began to darken, thicken, into a luxuriant raven blackness of stunning beauty. A bent, withered old body suddenly stood up . . . straightened . . .and blossomed into the fullness of beauteous youth.

Run, my Jonathon! Run until you can run no longer! And when the running is over–when you can take not another step–then I will take you into my arms and sink my fangs into your warm, warm River of Life. We will live forever, my Jonathon. Forever!

She Says, He Says; She Does, He Doesn’t