With my book about to come out next month, I thought I would tell the story behind the story. If you have a spare five minutes to sit and read.

Back in March 2011, I had the idea for a story line based on a misconception.

The lead character is Pat Canella. The story started with a man walking into a dingy office, and asking for Pat Canella.

The man looking astounded at this frail girl said to her “OK, joke over miss, where is he?”

“I am Pat Canella,” says Patti. “Used to say Patti, I got fed up of chasing ponies for rich kids. I know you were expecting some tough Irishman, or an Italian with a flick knife and greasy hair, sorry you got me.” 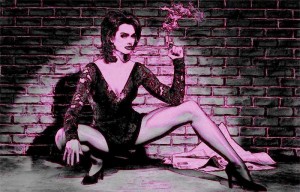 The story sat on my scheduler for weeks doing nothing, so I decided to trash it. The more I tried to get it to move, the more like Nancy Drew it was becoming. It went into the trash file and there it stayed until…

In October, checking my Twitter contacts, I saw a competition ran by the Merrill Collection.

“OK.” I said to myself “Got nothing to lose, just send the email address in.”

This I did, the competition closed, I thought nothing more of it, I am a competition junky always got three of rour on the go. Then one evening chatting to a friend, I got bleeped that an email had arrived for me from the Merrill, eagerly I opened it.

There is good old Black and white were the words ” Congratulations,  Alan you have won the Ebook cover by Staci Perkins”

Imagine the joys I felt. Next was to look at the cover, as they wanted a story for the cover. The cover showed a girl, with a smoking gun. Here was my chance.

I quickly went to the trash file, luckily the story was still there. And now had a great new life infused in it.

The story that almost died, not only is my first book but on Bookrix and Facebook is creating quite a following now.

The Dragon and the Wolf Dance the Night Away…

Angelica Pastorelli Feb 10, 2011 29
You are an established author and have already published, or you have aspirations to become a writer but you…
Writing