The For Sale sign creaked and did it best to stay aloft, despite the winds onslaught. Eileen watched from her bedroom window the leaves that scuttled across the garden path and traced their flight until they disappeared into the maelstrom of darkness.

Her house was on the outskirts of the village and therefore deprived of the comforting glow of streetlights. She depended on the moon to light her way when she went outside, but tonight its rays were weak as the wind sent clouds scudding across its face.

“I’m weary Lord,” her sign echoed in the stillness of the empty room, as she crossed the bare floorboards to sit by the dead fire. 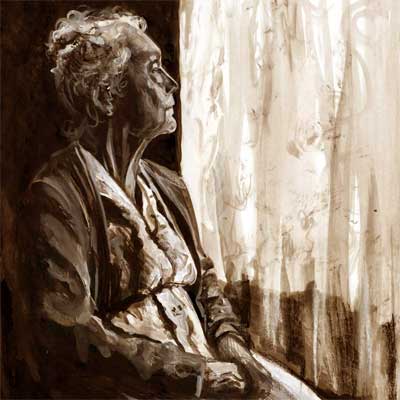 Like all houses built over two hundred years ago, each bedroom had its own fireplace, but it was many years since a fire had burned in any of the grates in Eileen’s house. At first, she used the excuse of her arthritis making it impossible for her to lift the heavy coal bucket up the stairs, but the truth was she had grown used to the cold and no longer felt its stinging touch upon her aged skin. An old patchwork quilt, made by her mother, served as her blanket since she no longer used the bed. The old rocking chair was kinder to her old bones and the softness of the quilt gave her comfort during the long wait, And waiting she was.

It was her nephew, Thomas who first suggested selling the house. As her only surviving relative it stood to reason he’d inherit it. The suggestion was not made directly to her, but to his wife on one of their rare visits. Eileen failed to see why anyone would be willing to buy the place with her in situ, so to speak, but Thomas went on about the money it would make and how welcome the extra income would be.

It was no use, she couldn’t rest. She got up and walked back to the window and stared out into the darkness. The garden had become overgrown of late and weeds dotted the cracked pathway. The fruit bushes, picked clean by the autumn wind and scavenging birds, stretched their brambles in all directions and sharp thorns gleamed white in the darkness. Eileen held her hands up to get a better look and shook her head in resignation at what she saw. The fingers that once tended the shrubs and planted the fruits were now as shrunken and gnarled as the tired trees. Still, with the right care, the garden could be brought back to life and it was the ideal place for children. Full of hidey holes and secret places in which to play and dream. They never had children, her and Fred and the house was much too big for them both. With six bedrooms it cried out for the sound of little feet, but the rooms remained closed, all except the one in which she now stood.

Rousing herself out of her self-pitying thoughts, she walked out onto the landing. Other than the crying of the wind, there wasn’t another sound to be heard. The stair carpet muffled her footsteps as she made her way down to the hallway. Dust coated the red floor tiles and the evidence of passing feet showed clearly. There was to be another viewing in the morning, the estate agent told Thomas and hopefully the prospective buyer would show an interest.

“I should hope they would,” Thomas said. “The price has been reduced four times already; it’s practically being given away.”

“I understand that sir,” Eileen heard the estate agent say. “But there is the matter of our little problem.”

Little problem indeed, Eileen glared at the man, imagine at her age being spoken of in such a way. She had to agree that she could be cantankerous at times, but so what? She was old and her bones ached. True, she had seen off more than a dozen prospective buyers, but only because they didn’t suit her. It would take someone out of the ordinary indeed to consider sharing her home with. It was the estate agents next words that made her ears perk up.

“Tomorrows viewer is a widow with four small children,” he said. “The price will appeal to her I know as her funds are limited. Who know?” He shrugged his shoulders. “She might not mind the intrusion.”

So now I’m an intruder in my own house, Eileen fumed, as she pushed open the door to the living room. The clouds cleared and moonlight flooded through the two, large bay windows. It was a huge room and perfect for a family. Only a few items of furniture remained, as Thomas had sold off some of the older bits along with her treasured ornaments.

“No one will want these old, antique pieces cluttering the place,” Thomas said. “I’m sure the new owners will want to put their own stamp on the rooms.”

What could she do, but agree? Eileen moved from room to room making sure everywhere was secure before going back upstairs. The wood on the rocking chair felt good and solid beneath her and the quilt gave her the extra comfort she needed at a time like this. All around her the house sighed and settled. A faint scratching sounded behind the skirting board signalling the presence of mice. This was something the new owner would need to hear about before they infested the place. She closed her eyes and listened to the sighing of the wind. When she opened them it was morning.

“It’s in good condition for its age and the garden is ideal for children.”

Eileen crept out onto the landing and peered over the railing. The estate agent was back and accompanied by the widow woman, whose children clustered around her. Two boys and two girls, Eileen counted a nice little family. The youngest child was about four, she guessed and the eldest about eight. Eileen didn’t realise as she studied them that the smallest child was watching her. The little girl smiled, when she caught her eye and waved her small hand. Eileen winked at her, before going back into her room.

“Can we explore, mummy?” One of the children asked.

Eileen didn’t hear the mother’s reply, but she could guess from the sound of footsteps on the stairs what it was.

“In here,” the whisper sounded outside her door.

She watched as the door slid slowly open and four small faces appeared.

“Come in, I don’t bite,” she ushered them inside.

They didn’t need any more prompting as they tumbled into the room and came over to where she sat.

“It’s so cold in here,” the little girl who smiled at her said.

“Is this your house?” The eldest boy asked.

“Do you think you would like to live here?” She asked.

There were nods of assent all round and for the first times in years Eileen smiled. The next few minutes were spent in introducing themselves and regaling Eileen with stories about the old house. Footsteps sounded on the corridor outside as the estate agent showed their mother the bedrooms. When they reached Eileen’s room, the man made some excuse about needing something from the car, anything rather than confront the old woman.

The young woman’s face showed all the signs of her loss. Dark circles swooped beneath her eyes and her skin had a pallor best suited to a corpse. She halted in the doorway and looked from Eileen to the children and then back again.

She moved hesitantly into the room and sank into the chair opposite Eileen.

“Run along and explore the garden,” Eileen said to the children. “I need to have a word with your mother.”

After they had scampered, Eileen turned to the young woman.

“There’s always a snag, isn’t there my dear; when something is as cheap as this house.”

“I don’t see why my presence should make much difference to you,” Eileen continued. “There is a bedroom for each of you and I tend to stick to mine, so I don’t think we would be in each others way.”

“Yes, but,” the woman stammered.

“I quite understand if our sharing is out of the question, but think of the advantages.” Eileen said.

“What do you mean,” the woman asked.

“You have lost your husband and so have I that is one thing we have in common. Fred and I never had children, though we longed for them. I’m too old to help around the house in any way, but I could keep watch over your children for you.”

“I have to work,” the young woman said.

“Of course you do, but I will always be here for them. At least they won’t come home from school to an empty house and that would be one less thing for you to fret about and I know you are laden down with worry.”

“I am,” the tears the young woman fought to control spilled over.

Eileen pulled a lace handkerchief from the sleeve of the threadbare cardigan and passed it to the woman.

“You have a cry, it will do you good and when you’re feeling a bit better we can talk.”

And talk they did. Eileen listened as the woman; Aishling told her all about her husband’s accident and the worry of raising four young children on her own.

“You’re not alone any more,” Eileen said. “Now you go down and offer that upstart of an estate agent twenty thousand less that the asking price. He’ll take it,” she smiled at Aishling’s look of surprise.

“I’ll go down and do it now,” Aishling walked to the door and then stopped and looked back. “I’m so glad that you’ll be here when we come back.”

Eileen walked to the window and watched as Aishling spoke to the man. He made a great show of indecision, but after a phone call to Thomas a bargain was stuck. The children came running around from back of the house and she watched as they jumped up and down when their mother told them the news. Before they piled into the car, they all looked up to where she stood and waved. They would be back soon and the house would be once more filled with life. She couldn’t have imagined a more fitting family to share her home with and she had known the moment she first saw that that they were something special. After all, not everyone would want to share their new house with a ghost.

My Eros, My Strength

Maya Kavita Apr 30, 2015 0
Would you be willing to give people your hard work, your intellectual property, for free?
Philosophy