“Ma’am,” someone said over my shoulder. It was far enough away that I thought it might be directed towards someone else, so it quickly slipped out of my attention.

“Ma’am!” This time, there was more urgency in his voice. I thought he might be talking to me after all. I turned and saw a black man with a large build in a navy blue tee shirt with a look of some alarm on his face. He looked pretty desperate and I knew he was about to ask me for money. 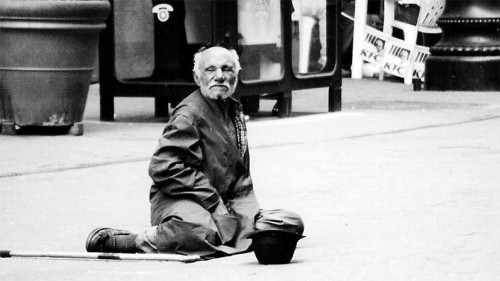 ‘Oh, crap.’ I thought… the timing was the worst. I had just spent what I had to spend (except for the last two remaining items that I needed to make a presentation). I had left the previous store because I couldn’t find what I wanted in my budget… but now, at Office Depot, I had found a better selection and better prices, however, I had not yet determined what I was getting or the cost.

“Do you have any money for me?” His voice was getting faster and more desperate, as he could detect from my face and posture that it wasn’t going well. “A few dollars

I’ve been hungry. I can’t STAND to hear that someone is hungry!! I knew all that he had wrapped in the word “Black” better than he might imagine. I’m not the person of influence that I may appear to be, though I’m certainly in more of a position of influence than he. I did not have the words or the time to explain everything that I wished I could say. I could feel he was debating walking away, to take his chances with someone else before he was discovered. I could hear in his voice that he was speaking from his Heart.

“I’m sorry,” I said. I don’t have anything right now…” I wanted him to know that I wasn’t unwilling, but after the rental car had taken a big deposit, I was temporarily wiped out. “If you would have caught me yesterday…” that may have made him feel worse. I know that it didn’t make me feel any better… I considered giving him a few dollars and taking the chance that I’d be able to get what I needed regardless. He walked away and I could hear a female employee throwing him out and I could hear him loudly advocating for himself. It was an uncomfortable, heated exchange and she was unbending. Now I really wished that I’d given him something. I was determined that if I had any change, I would find him and give it to him.

I made my purchases, and had a few dollars and change left. I circled the parking lots, looking for the man that in my mind’s dialogue, I considered a friend. Finally, bent over the hood of a police car in a neighboring parking lot, I thought I’d found him. Large Navy blue tee shirt, his hair looked like it had more gray in it than I remembered, and was he wearing a beard? I realized that I had stumbled on another man who was actually having a worse day. I parked fairly close and got out of the car.

I stood close enough to the situation to affect the energy of it, but far enough away to let the police finish their business. Two white cops with fat, shaved heads and black sunglasses– dark enough so that their eyes were completely concealed– were lecturing him. I heard one say, “You’re not welcome here!” “Not even to buy a soda?!” The man asked, indignant, understandably so. “No!” The cop insisted. “Not until you get a haircut.” The black man threw his arms in the air. “A HAIRCUT?!!” He walked away from them backward. One of his sneakers had no laces. I saw no visible teeth in his mouth. I knew that a haircut had not been anywhere near the top of his priorities for a long time. “I’m DIRTY!!” The man yelled. He turned and walked in heated steps.

. I also knew that he needed more motivation to get him into a store, especially after that humiliation. “Sir,” I said softly. I had to walk quickly to keep up with him. He did not look at me. “Sir,” I said, a little louder. He was repeating the exchange with the cops in his head. He did not notice me. Finally, I said, “Sir~ I have something that I’d like to give you.” He looked at me and I handed him the money. “Thank you, he said.” then he added, “I’m homeless.” I already knew that. I wished I had a pair of scissors or a shaver. There wasn’t anything more to say. I reminded myself to pray more for the poor, especially the elderly, homeless and desperate ones.

“Poverty is the worst form of violence” –Gandhi

“The King will reply, ‘I tell you the truth, whatever you did for one of the least of these brothers of mine, you did for me.'” –Matthew 25:40

Collagen and a Healthy Diet