Twelve-year-old Manni helped his mother, Mala, as she was stripping bark from a eucalyptus tree, then winding the fibers into strands that she would later weave into flat sheets for Manni and his brother to use as sleeping mats. It was a very hot and humid day in the West African Empire of Yoruba. Manni’s younger brother, Jalani, was playing with some of the other younger children, next to the riverbank.  Manni called to Jalani to get away from the riverbank, it was very dangerous. Just last week, one of  Jalani and Manni’s friends was attacked and killed by a crocodile. Danger was always lurking somewhere in the bush of Nigeria or as  Manni realized, next to the riverbank, waiting its opportunity to create havoc for the villagers. 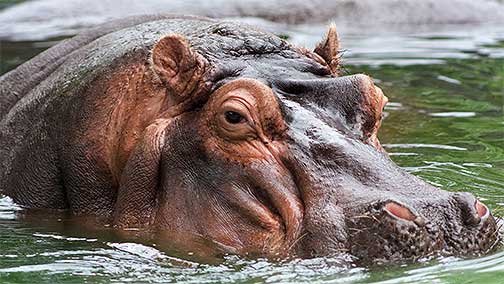 Manni was quite a seasoned hunter. As he did many mornings, Manni would wake just at dawn and leave before Mala and Jalani awoke. He would go upriver, where the waters were shallow and were  a safe place to cross to the other side. In the shallow water, Manni didn’t have to worry about hippos hiding. Hippos were very aggressive and very deadly. He also didn’t have to be concerned about an attack from deadly piranhas. In the shallow water a school of piranhas was easy to see, and simply beating on the surface of the water would frighten the school away and since the water was moving, the chances of walking up on wildlife were slim. Once across, Manni would move stealthily up the river a short distance, to a favorite watering hole of the local wildlife.

The pool of water was about 100 feet across, and had some very deep holes next to the bank and shear rock sides. There was however, a rather shallow beach-like area where the animals would come to get water. Manni hid himself among some high grass and brush close to the water’s edge. This morning, Manni was in for a special surprise. A small herd of gazelle wandered up to the watering hole. A large male ventured over near where Manni was hiding. He readied his spear and at the right moment he thrust the sharp point of the spear into the side of the gazelle. The commotion frightened the rest of the herd and they ran. The male tried to run also but didn’t go far. Manni gave chase, caught up with the gazelle, pulled his knife from his side and finished the kill. Manni made his way back to the village with his prize gazelle. This would provide food for the family for several days.

The rainy season was beginning in West Africa and Manni’s family would try to shelter themselves from the rain, just as most animals would do. Mala and the boys remained inside their hut, playing, and singing, assured that the dangers of the forest were far away.

But, today, danger would come from an unusual source. Manni heard a commotion. People were screaming and running as Yoruba warriors stormed the village, rounding up all who appeared to be in good health and physically able to work. The young men, and the young women, were especially valuable to the Yoruba King. They would bring a good price with the Dutch slave traders. The warriors took Manni and Jalani, but their mother was too old and was left at the village. About twenty people were herded together; their hands tied, and then tied in a chain formation as they were taken toward the boats moored at the riverbank. Many of the villagers knew what was happening and the uncertainty of their future as slaves was terrifying.

The captors were ruthless, and to them the villagers were simply captured prey, animals being taken to the market. Loaded into the boats, the villagers were taken down river, about eighty miles, to Lagos, a seaport where slave traders anxiously awaited their arrival. The trip was nine hours of pure torture. No food, no water, no stops to care for personal needs, beatings with whips for those who would cause trouble, and abuse occurred constantly. The younger of the females were not molested because that would then damage the goods and reduce the price the King could receive. The more mature women, however were subjected to horrible abuse.  Small children and babies would not survive. The crack of the bullwhip was a reminder. They were now enslaved, and subject to the will of others.

Upon their arrival at Lagos, Manni and Jalani could see the large ships anchored in the harbor. A sight they had never seen.  About eight other boats were also docked ready to sell their slaves. There were men on the docks watching as the people were removed from the boats.  Manni was amazed to see so many with white skin. The only other white skin he had seen was a missionary who came to the village. The slave traders immediately began an attempt to buy those they perceived as prime slave material.  Manni realized they were nothing but a product being sold for money.

One of the buyers stood out from the others. He was a Dutchman with long black curly hair and an almost clean appearance. His speech and mannerisms were father-like as he took part in the bidding for the twenty slaves. Manni thought he looked kind, but that was all a facade. Hannibal was his name and he was known by the other slave traders as one of the most brutal of all. Two others stood with Hannibal, as he surveyed the new crop of potential slaves. He walked over to several young males and females grouped together, in an attempt to comfort each other and hoping the buyers would ignore them. Hannibal pulled one young female from the group. Holding her by her hair at arm’s length he looked her over. He then shoved her toward the other two men who began to strip her clothing and left her standing in front of all, naked. Hannibal turned back to her, looked once again, and pushed her away. She was rejected.

Hannibal reached out to the same group, taking a male, then pushing him toward the other two men, who immediately stripped him. The men then began to make gross comments, bringing laughter from the buyers huddled around. Hannibal moved him to the side with the slaves he wished to purchase. Hannibal looked at a woman standing alone. She was probably 18 or 19 years old, and was holding a small child. He knew the child would never survive the journey to America. Hannibal signaled to one of his men and pointed to the baby. The man grabbed the child from the mother and amid her screams and protests, drew a knife and slaughtered the child. There was no use wasting time, space or food on one would not survive anyway. The two men then pulled the woman over behind some crates, where she was beaten and abused. And then left her lying on the ground. The woman began to crawl out from behind the crates. Manni, Jalani, and another man, helped the woman up and quickly surrounded her by the other men and women in the group of 50 or more that Hannibal had selected.

Manni saw Hannibal reach out his hand to one of the warrior captors, and then they were all herded toward one of the large ships next to the dock. They were led up the gangway to the deck of the ship called the Albatross. There they were stripped naked and forced down some steps into a dark, damp, area in the hold of the ship. The space had only four feet of head space, and most of the captives could not stand upright.  Manni and the other men and older mature women were placed in one compartment and the young women were placed in another, for their safety. The smell was horrible. The heat was almost unbearable. The only light came from three small openings near the ceiling of the compartment. Manni could see to the outside through these openings. Inside the compartment, Manni saw there were others already there.

Manni and Jalani looked for a place where they could sit on the floor. Scared and hungry, the boys huddled in a small corner space. The compartment was very crowded. There was only room to sit and not to lie down.  Manni discovered five wooden barrels near the door opening of the compartment. These barrels contained the only water source for all the captives. A short while later,  Manni heard a noise and the door to the compartment opened and two men came in, each carrying a wooden bucket. There was a stirring among the slaves as the two men pushed and kicked their way over to where the barrels stood. No one moved, as the men poured the contents of the buckets onto the floor. They turned to walk to the door, but still no one moved. They only looked intently at what the men had poured in the floor. When the men reached the door, the slaves all converged on the food the men had poured out.  Manni realized he and Jalani had to push their way through the mass of people to get the food they needed. Therefore, they joined in scratching and fighting for just a morsel of food. When the food was gone, the boys made their way through the people back to the corner.

Growing up in the foothills of the Blue Ridge Mountains, and especially in Kings Mountain, enhanced an interest in the American Revolution that was birthed at an early age with a visit to the Kings Mountain National Military Park. Yearly family reunions at nearby Lake Crawford, in the South Carolina portion of the park, gave easy access to visits to the National Park Museum, walks along the trails, and never missing a close up view of the gravesite of Major Patrick Ferguson and an opportunity to throw another rock onto the rock pile signifying the grave and a climb to the top of the rock pile to declare, "I am King of this Mountain." A lifelong dream of authoring a book based on my actual ancestors, came to reality. Living near the Kings Mountain National Park and also, a short distance from the Cowpens National Park only serves to fuel my imagination, and desire to share even more stories based on the history of the United States.

Ogho Eberekpe Feb 9, 2011 0
I am not too certain if this piece would be appreciated by the target audience it is intended for, but it has to be…
Writing