The waves licked wetly at the dock, muted and dull.  The pale moon tried to illuminate the world below with little success.  Dark clouds looming on the horizon drifted in, the first tattered fingers splaying across the moon like skeletal limbs.

Wind drifted across the sandy edge of the water where the tide lapped the sand like a thirsty beast, drawing up specters of dancing sandy ghosts cavorting across the narrow ribbon of beach.  Beyond the reach of the sandy ground tall dry grass whisked and danced stiffly, whispering secrets as the slender stalks rubbed together.

The incessant buzzing and chirping of insects stopped suddenly as a new duller tone joined the symphony of the waves licking against each other, the dock, and the water’s edge.  It was a duller sound, of water gently lapping at rotting waterlogged wood.

Somewhere a dog whined, cowering and shivering with fear.

In the houses the people slept, unaware. 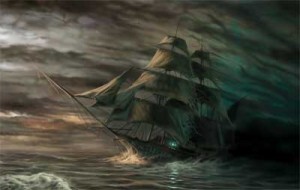 The dull shadow of an ancient ship silently crossed the surface of the waves, followed by the blackened rotting timber of its bulk.  Tattered shreds of what had once been sails hung limply from the masts, discolored and rotting.  Cracked and pealed, the weatherworn paint of the ship’s name was barely readable, “Illopogas”.  The very air around the derelict ship seemed to darken and grow heavier, stiller, as it slipped silently through the water toward land.

A homeless old man sleeping in his makeshift shelter at the edge of the beach groaned woefully in his sleep, his face twisting into a grimace of fear.  He was an old salt of the sea, having spent his years from a teen until he grew too old and feeble to tow a line working on various ships.  He had seen many seas, many places, and many strange things.  Only once had he laid eyes upon the ill-fated ancient lost ship that forever sailed the seas empty of crew and cargo except for ghosts and memories, the ghostly Illopogas.  Unfortunately, he lived to tell the tale.

Of course, none believed him.  Since that fateful day Jebediah, Jeb to his long lost friends and crewmates, had been lost to the ravages of the whiskey bottle, withering in body, mind, and soul.  Jeb had been the sole survivor of his ship, remnants of which later washed up on many beaches, the lumber strangely rotted and darkened.  He had been pulled from the murky waters by a fishing vessel, babbling unintelligibly and lost in a waking nightmare that only the soothing burn of a bottle of whiskey seemed able to quiet.

He had tried to tell them what happened, had tried to warn them all.  However, they just shook their heads sadly at him, an old sailor who had apparently sailed a few seas too many.  He babbled to anyone he thought, hoped, might listen.  Jeb had become a common sight in the sailor’s watering holes, sitting in a darkened corner, withered and marinated in a brine of stale whiskey, muttering unintelligibly to himself and occasionally entertaining the other drunken sailors with his inebriated ramblings of ghostly ships and monsters of the seas.  He had tried stopping people in the streets to warn them, but invariably they wrinkled their noses with a look of distaste and hurried on their way, trying to avoid the pathetic drunken old man stumbling about in a cloud of delirium and fetid odor.

A low moan drifted across the surface of the waves, sorrowful and lost, rolling up the narrow strip of sandy beach.

Jeb woke with a start and stumbled out of his makeshift shelter, staggering to the water’s edge.  His rheumy eyes stared out, empty and haunted, at the expanse of water.

Tonight the Illopogas returned for him.

Tomorrow an empty husk of a man would be found on the beach, lost forever within the tormented depths of his mind, a victim of a ghostly apparition.

Angular Trifecta Week 26: Where They Wanted Him

Hank Quense Feb 7, 2015 13
My publishing company, Strange Worlds Publishing, uses both Smashwords and Kindle to distribute my ebooks.  I did…
Writing