She felt the roughness of his hand on her arm. A dart of sun filled her and she stifled a gasp.

Hands were important to her. She knew they were strong hands. His were thick and masculine, well formed. He caused jabs of sensation each time he merely touched or brushed up against her. His scent drifted in and out of her consciousness and her eyes were forced shut. She could not shake a longing for more. 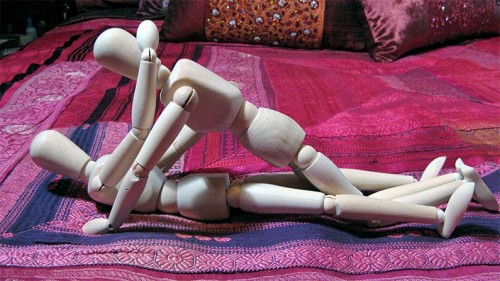 The apartment was old. Well lived. It was dirty, needed painting, needed new flooring and the shower stall could stand to be replaced. It was perfect. A place to go and just to be. A place to mourn. A place where he could lick old wounds and figure out ways to avoid more. The “witch” had done her damage months ago, and he was shattered. He was restless. He felt he had lost his identity.

Yet his procrastination and inertia had finally caught up with him. He waited for the world to come to him. And it did, in little ways, in spite of his inaction. He knew he was handsome. He knew he could make any woman laugh. A job appeared, one he thought he would have for just for a while until he’d found himself and lavished in his art. But the job lingered into years, not months. A place to settle temporarily was found also now in place for not months but years–10 years. Things would come along. Solid love or marriage did not happen. Children somehow never arrived. He was looking, but not looking. Looking for signs. Waiting for someone to tell him. His deep circle of friends gave him advice. He had drifted into inertia but still found laughter and companionship.

He thought too much. He lived as if he were on the sea without a compass. But he was not lost, not even consciously wondering where to go next, yet sure it would come or he would arrive. What ever it was.

The Walk Up
The apartment was filled with the acrid scent of sex and clove cigarettes before the deed had begun. The cats, rousted from their coziness, were puzzled and stared at them both in curiosity.

The kissing began and he enjoyed it. A sun filled him every time she moved over his mouth, touched his neck or breathed her life into his ear. His mind clouded. Their tongues smoothly soothed over each other. Their fluid slipped achingly around and dribbled like little rivulets of sweet apple juice down their chins. He felt amazed her kiss could have so much power over his penis. A sliver of her tongue across his lips instantly made him hard and wet. His knees buckled.

He gave her infinite pleasure with wave after wave of orgasms, for he was not selfish and he wished to relieve her tension he knew had been building in the months he had known her. He gave her them with the way she instructed but not the way he was hoping for; she would somehow know to twist, to contort, to dominate him to fulfill the final wish of set rules. He wondered if she felt his undercurrent of secrets, darkness. And so it was he could not allow his self to be released into the exquisite pleasure of the tight slickness between her legs. He would not allow the release of pressure and longing into her body. She could not have that.

She wondered about him, this gift that seemed to be interested in her. Surprisingly at her age she was changing in so many ways. Her sexuality was peaking to heights of which she never dreamed. She craved attention but was far from loose. She needed it from someone special, someone she could teach and who would teach her. In short, she wanted someone to let her be–fully and unapologetically.

Life was running at a fast pace and she felt she was missing it. She took action to relieve that craving to hold onto something meaningful. She took classes and wanted to get rid of places on her body that were foreign to her, and did not match her ideal act of coupling. Though still attractive, she still acted as if she were the striking beauty she used to be. She quit smoking to end the torture on her face. Put herself in social positions to be seen and talked to. She stepped up her writing and strengthened her profile. But she was not looking for him.

He Spoke
The chemistry was undeniable. It took hold of her and shook her senseless.
She could not quit him and neither knew where it would lead.

But that is what they thrived on: The surprise every time they were together and the enjoyment of their coupling. She had learned how to tighten her vagina to hold his master and make him loose himself inside her. She adored his shudders and sounds; his scent– a sharp aphrodisiac. Sometime ago he had finally allowed himself to lose control and be dominated by her kisses and softness, stillness, or shudder when her tongue touched every part of his body.