An elephant named Cindy has been feeling down for a while now. She thinks she is too fat and has been feeling so weak from eating very little. She spends most of her days by herself standing underneath a tree.

One day, a lion called Darnell easily spotted Cindy far away from several herd of elephants. He crept slowly while Cindy paid him no mind. He then had a change of heart because of her tears. 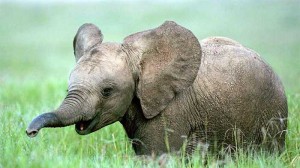 “Oh, I am so tired of being teased about my weight,” she said with sadness, as her ears flap back and forth angrily.

The lion felt a conflict within his killer instinct but began to charge towards Cindy. “I’m not buying into your tears, “roared the lion.

She looked at the lion with sadness. “Whatever,” she said, unfazed by the lion’s grimacing teeth, “If you want to kill me than go ahead and do it.

Darnell felt bad and rubbed his mane against her leg. “I’m not going to kill you.”

Cindy rubbed her trunk against his back. “Do you think that I am too fat? Tell me the truth,” she pleaded.

The lion looked her over. “You look great,” he said with a long smile and widened eyes. “Your body was structured perfectly for defending a lions attack.

Cindy Frowned. “No, but most animals are better looking and skinnier than me.”

Darnell blinked his eyes slowly and stared. “Don’t say that,” he begged loudly to comfort Cindy. “You have a large bone structure that was meant to defend jerks like me.”

Cindy titled her head. “But I want to be skinny like a giraffe, and I know I can get this weight off.”

The lion slaps in hand in the dirt with frustration. “Stop talking like that!”

The elephant stomped the ground. “Hey, why are giraffes so skinny and have no wrinkles? They spend as much time as elephants in the sun.”

“I have always wished to run as fast as a cheetah, but that will never happen. The lion began to stand very tall. “I don’t need to run fast as my polka
dot competitor.  I am a better hunter and the king of the jungle.”

The elephant began to glare at a Giraffe standing nearby and nodded with pride. “I guess I was not meant to be skinny.”

The lion nodded. “Always love yourself for the way God created you.”

The elephant reached over to hug the lion. “Thank for making me feel better about myself.”

“The lion’s family was watching nearby. They wondered why Darnell did not bring Cindy home for food.

Cindy and Darnell never saw each other again.