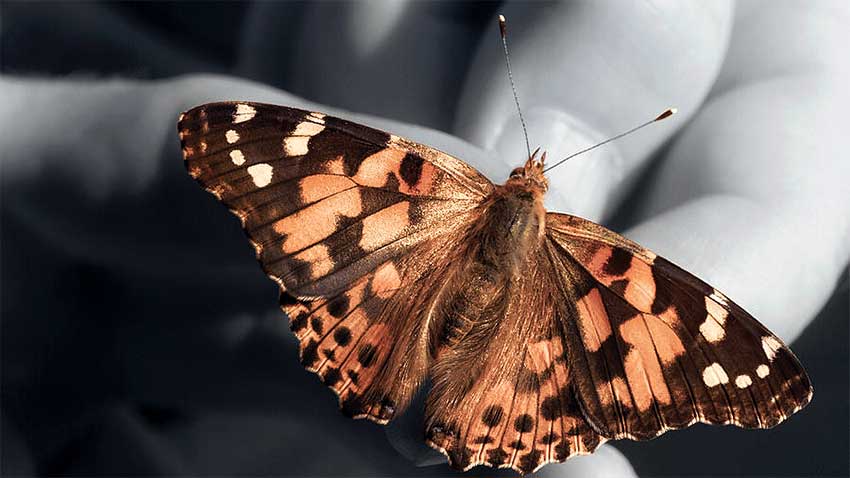 Butterfly Touchdown: Everything I ever needed to know about life, I learned from Eastern sacred texts – most notably, rebirth, re-purpose, five-cent returns from one room to the next.

Four years ago, when I was an adjunct at Columbia, I worked up the gumption to finally talk to Dory after a week of eyeing her in the staff lounge of the Classical Studies department every morning. Four years later, I stood cradling the phone in my hand, recycled butterflies fluttering under my skin, hoping she wouldn’t pick up while also praying that she would.

“The longer you wait, the worse it gets, buddy.” Kenny, hunched over on the couch, shoveled chips into his mouth as he stared at the screen. The game was tied, and all it would take was one winning touchdown to seal the deal. He could have either been talking about the loaded gun half of America was sitting on, or what I was about to do. Even though he’s ten years my senior, we have been friends since my undergrad bartending days – when he, a regular at the bar and self-appointed dating expert, would give me often-solicited and sometimes-helpful tips. Those were the same words he had said to me when I was contemplating introducing myself to Dory, and now, as those first-time feelings slowly overwhelmed me, they applied more than ever.

“Yep,” I said, the receiver growing sweaty in my grip. Eventually, I disassociated enough to press the digits which were burned into me like wood marking. I don’t even know what I’d say; small talk would feel disingenuous when we had passed enough big talk between each other to fill a novel. Perhaps I would talk about the game, which I’m sure Dory was watching, though neither she nor I had a real reason to root for the Patriots or the Rams; like most people in New York City, we were dropped into it from our respective UFO’s – she from the West Coast, and I from the Deep South. We made Manhattan our home, and for a while, made a home with each other – at least, we tried to, until the rent in happily-ever-after got too high. The last time I saw her was months ago, soon after the nation had sat vigil by the TV for a very different reason, and she came by when some of the rubble and shock had been cleared.

“It’s funny.” She had said, with the ease of someone playing an icebreaker game. We sat across from each other by the window, both nursing cups of tea. The sight of her in my living room again was welcome but slightly obtrusive, like that of a piece of new furniture still in its box that hadn’t yet been set up.

“That this is what it took for us to be in the same room again.” She cupped her hand to her over-pierced ear and titled her head towards the window, listening to the new soundtrack to life in the city, a clean-up crew picking up the ruins.

“Well, it took a little more than that.” I murmured. It had, in fact, taken three long-winded voicemails – one a frantic message left on the day that made the world standstill. Even in our early days, it was mostly I who had to pull the opening strings. But I kept quiet. She shuffled in the armchair she was sitting in as if wriggling from the grasp of something unwanted.

“Give it another year or so.” She fussed with a smiley-face pin, one of many on her jacket. “I’m telling you; someone is gonna be cashing in on this for a movie or a book. Someone always does.”

“I mean, that’s generally what happens when history is made.”

“No, I don’t mean, like, documentaries and stuff. I’m talking about people who go out of their way to make this kind of thing into a love story. It’s a little gross if you think about it. Don’t they have anything else to make them feel something?”

“Maybe they don’t.” I shrugged, hoping we could talk about something else. It seemed that Dory did, too, because she looked away and stroked the small stuffed owl on her purse keychain, which she’d seemingly had forever.

“Oh, him. Yeah.” She played with the little toy like a shy child. “I took him off for a while when I got a new purse, and lost him, but then found him again. Just felt like turning to old stuff for comfort.”

“Like?” I tried to coax out of her what I hoped the answer would be. Over the years, she had given me plenty to turn to for comfort, shared days, and nights now residing in the recesses of my brain. I waited for her response, hoping we had joint custody of my nostalgia.

“My parents’ old Victrola. Dug it out for my nephew.”

“Did you?” My smile was still on, biting my disappointment. “What did he think?”

“You should have seen the minute he finally figured out how to work it. His eyes just lit up!” She shook her head side to side, then leaned in, as if she was admitting a shameful secret. “You know, my father saw this girl and her mom come in while he was on duty at the post office the other day. She wasn’t that little, maybe eight or nine. But still, she didn’t know how to put on a stamp! Pretty soon, we’re gonna have a whole generation that won’t know how to mail a letter. Never gonna know what it was like to pay for stamps or walk twenty minutes to the mailbox.”

“Kids don’t know sacrifice,” I said, hearing my own voice bounce off the walls of the room.

“You know what does know sacrifice? Trees.”

“If it weren’t for those poor bastards, we’d be stupid and dead. Think about it; we live on their ashes, breathing in what they breathe out. Lined paper. Yellow paper. Paper rotting at the bottom of a bag. Paper coasting across mountains and oceans, telling people what God says, what man says, spinning the Earth like this.” I babbled, spinning an imaginary basketball on my finger.

“No, I’m just right.” I spat out, thinking of all the letters I had written her after she moved out, all the trees that had died in vain so I could try to save what no longer had a pulse. Our relationship had been on hospice long before that; anything physical that I gave her was met with a catatonic shiver, and anything verbal was met with dead air or a recording of something sweet. Whose fault was it? I’d like to think it was time’s; she wasn’t wrong about kids and sacrifice, and that’s what I was back then. One of the main hallmarks of being fully grown is learning to love from a scale instead of a seesaw. In this area, she had always been an adult. She learned it way before I did, probably as a teenager, digging out the Victrola, putting on some classic album – what would she have listened to? Knowing her funky, cerebral self that had drawn me in, maybe “Blonde on Blonde,” closing her eyes to the music and imagining the future, asking Dylan what making love just like a woman really meant – little did she know that she would try every way she knew how; claiming to be too full to eat the last slice of pizza—taking the time to clean double plates, double clothes, double rooms—pretending, for my sake, not to want the baby who kicked her only in her dreams. Agreeing not to move from our apartment and to catch two trains every day to the new job she had taken after Columbia so I could still walk two blocks to work. Swearing up and down that the crescent was enough when she craved the whole moon.

“Anyway, I, uh, I wanted to talk about…..us maybe…..” I used my hands to say what my mouth couldn’t, moving them in a loopy dance to represent a road ahead.

“Is that why you brought me here?”

“You mean dragged you here.”

“You’ve been Martyr-Of-The-Year since 1998.” The words flew out before I could stop them, and she looked at me with incredulous eyes.

“I had every right. Now, I don’t have the energy to give or receive.”

“To give or receive?”

“Don’t play this game.” I snapped and immediately hated myself for it. She bristled, the way she often did when we went down this road, radiating glacial anger, and I softened.

“We need to continue.”

“We don’t need anything. You want to see people in need? Turn on the TV. Look out the window.”

“People are in need, every day, all the time, Dory. Of different things.”

“You’re not a big-picture person, and I’ve never liked that about you.” She had meant it as a statement of fact, but it hurt like an arrow. Yes, it felt greedy and wrong – disgusting, even – to want for anything at all when whole neighborhoods were still choking on dust, and entire families were torn apart by a perverted ideology. But I couldn’t see my past own four walls, which was sitting right in front of me. Like a lot of our conversations, this one ended in profanity ping- pong. But at this present moment, watching the game and holding the phone to my ear in giddy fear, I knew I could give it another shot.

“Twenty-one seconds, let’s go!” Kenny was sitting impossibly still, but the apartment shook with his impatience. The clock was bleeding out; in the stands and millions of homes, lungs paused in suspense, eyes forgot to blink, hearts worked overtime. Somewhere, a neurotic Holy Trinity was forming: I, being taunted by the dial tone, she, possibly lost in the national freeze flash mob that connected all of us whether we liked it or not, and a young star behind a helmet itching to make or break this cold February night with the pigskin in his hand – the last bullet gearing up to leave a trail into tomorrow…

Born and raised in the Boston area, Sharisse Zeroonian is a filmmaker and writer by night, and a public access TV producer by day. Her work has been featured in The Minetta Review, The Armenian Weekly, and on NPR. She is currently working on an original television show and a web series; stay tuned (excuse the pun!).

The Rock of Gibraltar