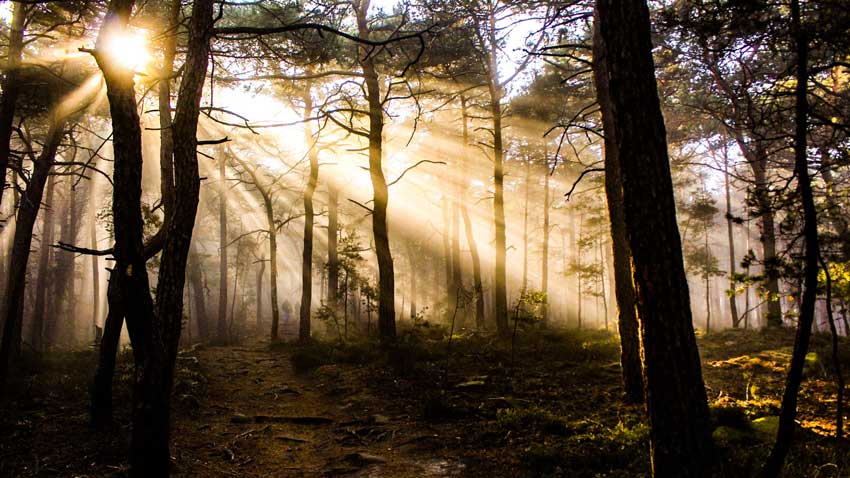 It was an ordinary forest, as far as spooky-looking woods go, filled mostly with craggy twisted oak trees, their gnarled branches reaching like skeletal fingers and deeply wrinkled cracked bark.  They clustered together, their branches twisted and tangled together, daring any to enter their midst.

The land here lay low and wet in the spring, leaving the stand of trees, stick-like saplings, and sparse tall yellow grass invaded by wild roses with their sharp thorns standing in a shallow bath of meltwater throughout the springtime months.

These were far from a silent stand of woods.  A small stretch of thick growth surrounded by fields of crops interspersed with some stretches abandoned to grass, weeds, and stray crop seeds.  Against one side of this stretch of trees, amidst the farm fields, was also nestled a small happy community.  The woods teemed with life, red and grey squirrels, rabbits, mice and voles, and a range of birds.  With the damp ground, they were a haven also for frogs and toads, and of course, the ever-present blood-sucking mosquitoes.

It was a typical small-town community lying nestled against the miniature forest.  It had grown from centuries-old land of grasslands mixed with forests.  The old forests and grasslands were slowly chopped down, turned over, and settled as the world slowly populated with humankind, the landscape of humanity changing from hunter-gatherers to farms, towns, and villages.  Eventually, towns and communities grew together to become cities, family homesteads populated into small farming communities, and untouched land became rare pockets of unsullied old-growth forests scattered about in tiny fragments bordering farm fields and stretches of small community homes.

Some of these tiny pockets of untouched woods still held secrets.  Some of these secrets were perhaps best left that way.

The woods sat silent and brooding, an ugly tangle of dead-looking leafless skeletal branches that looked like they belonged in a darker and more sinister world, the world of the dead.  The clouds hung heavy, dark, and grey on this day, a thick, suffocating blanket hanging low in the sky to cast a pall over this small piece of the world.

The snow lay heavy and wet, crystalline flakes shrinking and melding into a dirty slush as the temperatures slowly warmed.  In time, the snow would vanish and be replaced once again by the murky, stagnant meltwaters that would take a few months to dry up.

Most of the rodents, birds and other small woodland creatures were conspicuously absent on this day, having chosen to hunker down and wait out this gloomy day.  Nevertheless, a few squirrels and birds still flitted about the skeletal trees, a small rabbit nervously twitching its nose as it sat motionlessly waiting.

Two children playing in their back yard off the woods dared each other to go exploring into the spooky trees.

“I bet you can’t go to the fallen tree,” said the older and taller of the two boys.

The younger boy blanched, his stomach turning sickly, but stared stone-faced at the fallen rotting tree laying nestled within the narrow strip of woods.  He was not going to let his brother know how scared he was.  He could already smell the mossy rot of the long-dead tree, although he had never been near enough to it to catch its odor.  It smelled in his vivid young imagination like death and decay and something even darker.  He watched a tiny red squirrel flit around the trees, untouched by the dark, brooding sullenness and the spooks, ghosts, and monsters. His mind screamed must surely lurk hidden inside these scary woods.  He swallowed.

“Can too,” the younger boy said, his voice cracking with fear.  “I bet you can’t go stand on that ole’ stump,” he countered.

The old stump was a rotting remnant of an even older fallen tree that had long ago vanished into the mud and scraggly growth of the woods.  The stump remained, standing defiant and threatening beyond the fallen tree now lying discarded and tangled in the woods, sharp splinters and points of shattered wood sticking up as though waiting to impale any foolish boy

who tried to climb it and fell.  Its wood now was soft and crumbly with rot, its sharp jagged edges unlikely to be capable of impaling anything for years.

Kevin “humphed” at his younger brother.  He was just as scared but certainly was not going to let his little brother know that.  He nervously hiked up his pants, which did not need it, and stepped forward on a mission.  He marched purposely into the woods, careful to keep his back to the younger boy so he would not see the paleness of his waxy fear-filled face.

With a scuff and a shrug, Jesse reluctantly followed his older brother.

The little red squirrel scampered up to the high branches as they passed, pausing to chitter down angrily at the boys.

They reached the first point, the fallen tree Kevin had dared his younger brother to venture to.  It was no victory for either boy.  On a forced march of pride, determined not to reveal his fear of some silly trees, Kevin continued.  He crawled over the fallen tree, its rotting length sagging with a soggy cracking beneath his weight.  His forward march slowed more the closer he came to the wicked-looking ancient broken stump.

Unable to let his older brother face the woods alone, Jesse followed.  As he drew near the old stump where his brother had stopped to stare motionlessly at it, he noticed something unusual looking at the base of the stump.

The boys would never be seen again.