Mitch and I sat at the bar drinking San Miguel beer and listened to Madonna`s “Material Girl”—it played endlessly in every bar as the Filipinos tried to copy the Western World`s trends and styles.

The bar girls, one by one, came by and made their ploys to get us to take them home for the night—I was uninterested. I just wanted to get drunk…really drunk. Like the blood of my Savior in years to come, I hoped the alcohol would wash away my sins.

The bar was called The Apple. It was one of a hundred dives along the main street of Olongapo City off of the American Naval Base in the Philippines. This place, Olongapo, was supposed to be paradise. It was more like Sodom and Gomorrah. The Apple had a long entranceway that was Granny Smith green and snaked in a long “S” shape. The carpet was shag. I don`t remember the color. The smell was typical—stale beer, cigarettes, cheap perfume, and body odor. It was ubiquitous; it permeated your soul. The girls were all poor peasants sent to the cities when the American ships came in because they could make as much in one week—with their bodies—as their families might make in a year. The girls—after a while—all looked and sounded the same. Yes, they were beautiful, as most Philippine women are, but I could not bring myself to sleep with one more of these women. I had an emotional hangover from all of the decedent behavior I had seen and lived during the few days I was off duty. I put on a wedding band I had borrowed from a married buddy of mine, that had duty that night, so I could show it to the girls and wave them off. 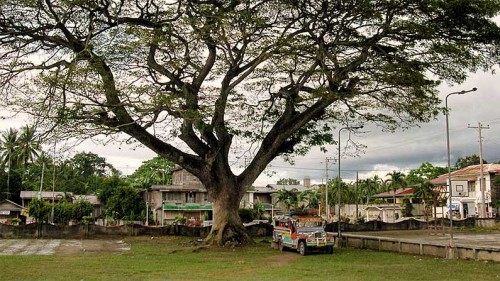 The bar lights where leftovers from the 1970`s. Disco balls that spun and threw off a dizzying display of colors across the bar. I just sat and drank. I drank as fast as I could. I was drowning the memories of my life. I was dreaming of home. I was just one more drunk sailor in a sea of sin.

Mitch had found his choice of bar girls for the night and he was adamant that we should go back to her hut to smoke some Hashish. What the hell I thought, nothing here but noise, confusion, and endless pleas from bar girls to buy them a drink. So we headed out to the main road to grab a “Jeepney”—the standard Filipino cab. Jeepneys were like a small bus/jeep. Each one was customized by its owner. They were always multicolored and had amazing paintings of Philippine leaders, Gods, advertisements, and poor attempts at copying Western Culture.

As we headed out of town, I knew in the back of my drunken mind that we were told at base to never leave the main drag. I faintly felt a sense of danger. My drunken stupor numbed any alarms my thoughts could raise.  We headed further out into the jungle and came to a small village. I don`t remember how long we drove or how far away from Olongapo we were. We were in the hands of the enemy—too drunk and foolish to realize the dangers. The Filipino men hated American sailors. I had been robbed at gunpoint twice in the Philippines during my Navy career, once in a bar in broad day light. Hypnotized by booze and women, we plowed forward into the abyss.

The next thing I remember, we were sitting in this shack of a house on a couch as we passed a pipe around. There was another girl there who was the room mate of Mitch`s bar girl. She made attempts to kiss me and fool around but I shewed her away. Somewhere deep down in my soul I had had enough of this den of iniquity called Olongapo. As we smoked, faces became twisted and evil; like wicked clowns, they laughed.  I suddenly felt very paranoid. I wished desperately that I had not come to this place. I looked up from my frozen malaise and saw one of the girls peeing through a hole in the floor; there was no pluming in the shack, just a hole in the floor.  That`s all I remember.

I woke up in an adjacent room from the main part of the shack. I was lying naked in the bed by myself. I jumped up panicked—did I have duty? Was I late? Where was Mitch? Where was the girl I had obviously slept with? Where the hell was I? I jumped out of the bed and stumbled—hopping on one leg—to get my pants on. “Mitch!” I hollered—no answer. “Hello…anyone here?” Again, no answer. I walked out into the main room and it was empty. It was about 8 am. I had to find out where I was and get the hell out of there fast. It was dangerous to be alone and off the main drag. I felt a darkness within. It seemed that the four horsemen of guilt, fear, remorse, and sadness has suddenly surrounded me. Their eyes glowing under their dark helmets and chainmail.  As I got dressed I noticed all my Pesos (Philippine money) where gone. What the hell, I thought; I had over three hundred Pesos in my wallet last night. I had been robbed, again.

I finished dressing like it was an Olympic event and ran out into the street. I saw a young Filipino man with a motorcycle and a sidecar. He spoke no English. The look in his eyes screamed at me not to trust him; however, I was desperate. I said to him, “Olongapo…take me to Olongapo?” and pointed to his motorcycle. Strangely, I had found a roll of quarters in my pocket when I had gotten dressed. The exchange of the American dollar at that time (1985) was about 23 Pesos for one American Dollar. I suppose the girl, or whomever had robbed my wallet, didn`t know what a roll of quarters was. I was lucky as hell. The man motioned me into the sidecar and we drove away.

We drove for about twenty minutes through the jungle on roads that were like pig trails. The frightening thought entered my mind that I had no real idea where this man was taking me and I had no weapon—not even a knife. The motorcycle rocked back and forth and jumped up and down as the men sped through the trials like we were in a race of some sort. Finally, to my relief, I saw the familiar city streets of Olongapo up ahead.

As the man pulled over to ask for his payment and let me out, suddenly out of nowhere, another man ran up and flipped open a Butterfly Knife and stuck it to my neck. The driver of the motorcycle began arguing with the man that held a knife to my neck. I don`t know if he was defending me, or claiming his territory. I felt the roll of quarters in my pocket. I said to the man, “Pesos…Pesos?” He looked at me with a murderous hate and slowly nodded up and down—yes. The driver began to scream at the man again, as he did, I tore open the roll of quarters and threw them—scattering them all over the street. Ten dollars American—the amount in a roll of quarters—was enough for these guys to live for weeks. The driver and the man with the knife scrambled to beat one another to the scattered treasure on the street—totally forgetting about me. I ran as fast as I could. Ten dollars paid my ransom. Ten dollars let me live another day. I never returned to Olongapo again.