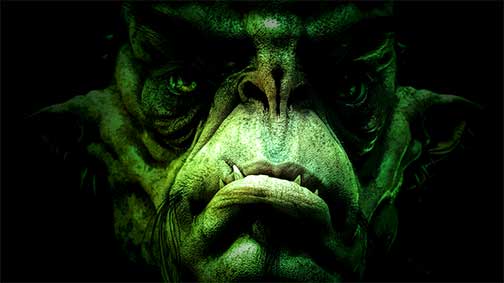 It was three summers before Mica once again had the good fortune to share another adventure with all five of his goblin friends. He was busy making himself a new flint-headed spear one day in midsummer when he became aware of a small rapidly approaching shadow at the extreme periphery of his vision.

Glob sat down heavily beside him out of breath. He scratched his ancient leathery ears, taking advantage of the cool shade from the extended thatch above the entrance to Mica’s home, away from the heat of the noonday sun.

“Morning Glob,” he replied, looking at his old friend’s expressive face. Clearly something of great import was worrying him. “What’s wrong Glob, what is it that brings you out of the woods in the middle of the day?” Mica enquired.

Mica’s old mare Miranda stood hobbled behind them for the night. Not that she would have wandered off at all while her friend Neo was close by.  The flickering lights of the campfire magically illuminated her. She munched contentedly on the fresh sweet hay in her nose bag. And, as all grass-eating animals tend to do, she freely contributed her own loud and smelly efforts to the contest, reducing everyone yet again to tears of laughter.