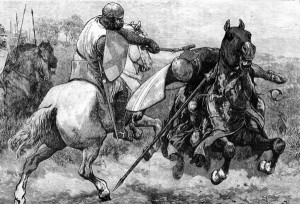 Below where Wuffa’s mighty sword and shield hung, sat Rædwald, lord and undisputed king of the East Angles.

To his right sat his two sons Rægenhere and Eorpwald and their uncle Eni, Rædwald’s younger brother; to Rædwald’s left, his wife Eabæ the mother of his beloved sons.

“Then we have no time to lose. Lord Edwin, will you fight or will you cower here?” Edwin stood up knocking back the bench he had been seated on. Drawing his sword, he strode to the centre of Rædwald’s hall.

“Great king I stand by your side ready to do battle with my brother in law Æthelfrith and his army. He sought to kill me, denying me my right as the lawful king of Deira.”

Rædwald rode at the head of his steadily growing army dressed in his magnificent polished and ornately carved steel helm, with its protective cheek pieces, cranium ridge overlaid with gold, protective face mask with its gold brow ridge ends decorated with tusked Boar heads, nose and moustache inlaid with gold, together with his beautiful solid gold shoulder clasps inlaid with garnets to hold his rich cloak in place, and at his waist his belt, with its ornately designed solid gold belt buckle.

As dawn broke on the mist-covered east bank of the River Idle, Rædwald had formed up his considerable army into three columns, similar in appearance to the old long-established Roman legions.

To his left, Edwin stood ready with his men and to his right, Rædwald’s oldest son Rægenhere and his men prepared for battle. Rædwald sat motionless at the head of his central column with his old friend Egfrid ready to protect his king’s back.

Across the marshy meadow, the mist began to lift as the sun slowly burnt it away, revealing Æthelfrith’s encampment. At Rædwald’s command, the three columns formed their shield walls and began to shout “Out, out!” banging their iron-tipped spears against their shields.

The tide of battle slowly began to turn in Rædwald’s favour as his three-column shield walls steadily drove forward to where Æthelfrith stood surrounded by his most faithful thanes, ready to die for their king.

Grief struck at the death of his son Rægenhere, Rædwald broke Wuffa’s great sword and returned home a broken man. Soon after, in his forty-fourth-year king Rædwald died and was buried in all his finery in his boat at a site in the English county of Suffolk known as Sutton Hoo. His like would never be seen again…