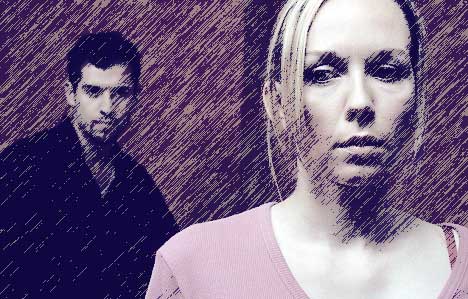 Cuffed to a doorknob within her full-sized closet, blood streaming down her soft cheeks; he had beaten her for the last time. Amanda had been married to Mark for 20 years and after bearing her 4th son, the beatings were hostile, hateful, and utterly volatile.

Trapped, trapped in the beige and yellow print closet for two more days; Mark was out of town on a stockbrokers retreat. She knew he wanted control, control over her, her independence, and who she visited within her life. Amanda had many friends with whom she associated herself and played backgammon, bridge, and poker.

Gary, a man from the poker team left a message regarding the co-ed game being canceled and asked Amanda out for coffee on the home recording. Mark, in his fury and rage over the recent stock market crash he could not figure out; where he lost millions of dollars, chose to take matters into his own hands literally. He beat her repeatedly, first with his fists on her light-skinned face, and then repeated blows to her chest, lower body, and kicks of fury on her legs and abdomen area.

She could hear the shatter of bones and flesh with each and every blow from his body. He would be assured that she would never attend the poker function or any other function while he was gone on business. She, Amanda, seized crying over the beatings; if she showed no fear, the beatings were shorter in duration.

She could not scream for help; her jaw was broken. There had to be a way out of this closet. She reached into her right pocket with her index finger, finding her house key on the fourteenth hour. Pulling and tugging at her pant strings and pocket, the key fell into the puddle of urine below her feet. Hands covered in her own blood, she reached into the urine pile to retrieve the key.

Using the key to shimmy the cuffs locked on her wrists, she was able to release herself from the handcuffs finally and set herself free that afternoon. Limping to the phone, one leg dragging behind the other, all the phone lines were cut as well as the computer lines.

Crawling over to her purse in agony, she searched for her cell phone; it was missing. In planning her escape for months, she went into the attic to get the silky bow-tied box that looked like a gift. She slowly opened the box, looking downward at the millions of dollars she had taken from Mark’s stock crash under an alias name she used a month ago, the loaded gun, a box of bullets, and a spare cell phone.

She dialed 911 however the line was busy. She had to get out quickly, as she knew he could change his plans at any time; he had done that before to her. She had found the spare car key in the box that she forgot about that day.

She was not just leaving; she was leaving with a bang. Smiling brightly as she filled every single bottle of shampoo, conditioner, bubble bath, and water bottles with bleach, floor cleaner, sodium chloride, rat poison, and Nair, she would soon have her day of victory over this bastard.

She wanted his body to suffer as hers had for so many years. Laughing hysterically as she left the house that evening, as, “I’m on fire,” played on the radio she left the house glancing back at the front yard, covered in house furniture, all his clothes, and belongings on the grass. She enmeshed the yard with gasoline and lit a match before getting in her car.

The Visitor in Purgatory