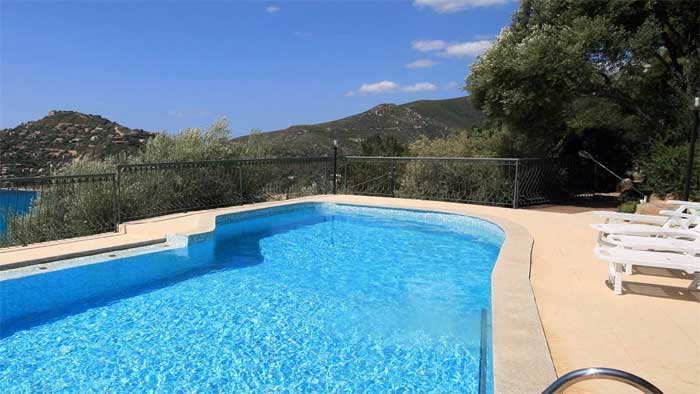 She sighs, stretches, and takes a sip from the glass that lies on the table beside her.  Beads of condensation slowly run down the side, pooling on the plastic table.  She stretches and goes back to her book, staring again at the page she has been reading for the past twenty minutes.

When he has tired he pushes against the side of the pool and, toned biceps flexing, he emerges, the water beading his body like the condensation on her glass.  His beauty takes her breath away and she drops her book, a thunderclap in the silence.  He looks up at her, smiles, and runs his hand through his damp hair.  Blushing, she picks up her book and pretends to read.

Knowing she is watching he stretches out on a lounger, flexing toned muscles, and raising his arms above his head before intertwining fingers under his still-damp hair.  His eyes are closed and he smiles.

She picks up her book and goes back to her room where she sees her reflection in the mirror.  She pulls her fingers through tangled hair, flecked by early silver.  The sun has tanned her skin and she sees the faint wrinkles around her eyes more clearly.  Her body is still youthful, the product of thrice-weekly gym visits and watching what she eats.  But she feels old and out of place in this idyll of youth.

She eats dinner alone and sits in the bar where the lights dance off the silver hoops in her ears and young couples dance on the moonlit terrace.  She sips at a pina colada, making one drink last an hour.  Then she sees him.  He walks into the bar, white linen covering those strong legs, a golden chain around his neck.  The barman calls out a greeting and he strides over to the bar where he takes a seat close to her.

She feels the colour rise to her cheeks once more and turns to go but he sees her and smiles and she finds herself smiling back.  He moves to be closer to her and begins to speak, the words stumbling from a tongue unused to English.  She finds his accent as beautiful as his body and she speaks to him, her words hesitant and uncertain.

They stay at the bar until the dancing finishes and when he asks her to walk with him on the beach, she agrees.  They pick their way over the pebbles and seaweed until they reach the soft sands where he bends down to take off her sandals, his fingers caressing her feet.  She shivers and he takes her hand.  They walk on sharing smiles until they come to the promontory where he turns to her and takes her face in his hands.

He kisses her, softly.  She can smell his cologne and taste the bitter gin on his lips.  He kisses her again, more deeply, and stirs within her a memory of another time and another kiss.  Her lips respond and as he puts his arms around her and gently pushes her towards the sand she doesn’t resist.

No longer needing the confidence of alcohol they soon make their way to the beach, laughing at their haste.  They make love, more urgently than before then lie together under the stars, the moon casting a blanket of soft light over their bodies.  They talk of their pasts, the schools they attended, the books they read.  She would like to ask about a future but knows to do so will break the spell.

They move together again and she thinks she has never felt more wanted, more loved.  This time she watches him, her eyes open and she sees that his are closed.

She listens, wanting to believe but fearing the truth to be different to the words tumbling from his lips.  He writes her address on his hand and swears he will call her every day when she gets home. He kisses her for a final time and whispers, “fino a quando ci incontreremo di nuovo.” She wonders if they will meet again and runs to her room to hide her sobs from the couples still mingling in the foyer.

As the months pass she lets out the waistbands of her skirts and wears tops baggy enough to hide her swelling belly.  She writes letters to him and sends them to the barman at the hotel, begging him to pass them on. She waits for the post eagerly each morning and is disappointed when no letter from him ever slips onto her mat.

Eventually, she stops looking and shops for smocks and baby-grows.  She turns her study into a nursery and wears sensible shoes.  She buys a moon mobile to hang above the crib and when her daughter is born she calls her Bella.  When the child is older, she will give Bella the silver moon and tell her about her father, the man who scattered diamonds.

Craig Murray Sep 25, 2013 4
Whenever possible, the author will not have scenes or situations explained by characters. No, that would be bad!…
Publishing