It was Saturday morning in the high school gym. Parents and children were gathered for the basketball game: the home team, the Eagles, against the Sharks.

The gym was an old run-down facility, but with much history for the people of this small town. Many of the spectators had played there in their youth. A mother was in the bleachers talking with her neighbor about a recent event, it was a bit of a scandal. 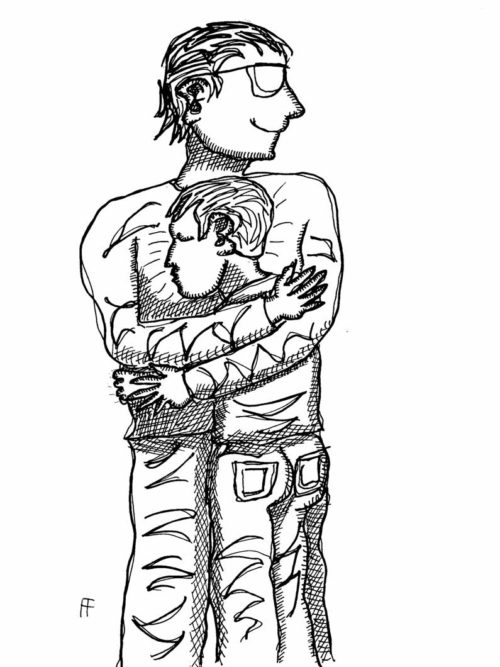 “Some boys didn’t like him because he was strict, but I think he did a great job coaching,” said Mrs. Williams.

“I know Nick expected a lot from his players. They say it happened at the Teen Center on hockey night,” said Mrs. Connor.

“Yes, after the game. A boy was very upset about losing and Nick was trying to console him. I don’t think he meant anything by it. This whole thing’s gotten out of hand.”

Mrs. William’s son got the ball and started down the court. The two women stopped talking to watch. He dribbled, faked a pass, then charged past the player who was trying to block him. He jumped, made a shot, it fell short by an inch.

The scoreboard keeper leaned over to the man on the scorebook and said, “The blood is on his hands. I tell you.”

“Who has blood?” said the scorebook.
“Patronski, who else? It’s his job to supervise the Teen Center. He spends way too much time at home getting paid, letting his underlings do his job for him. If he’d been there it wouldn’t have happened.”

“Did you hear the outcome of the trial?” asked the scorebook.
“He’s listed as a sex offender and has to report his movements or something like that.”
“There is no way he’s a sex offender. Christ, I know the guy. I worked with him that night too.”

“You’re shitting me?” said the scoreboard.
“I was there. Patronski hired me to take care of the snack bar and main counter so Nick could concentrate on coaching.”

Leaning against the wall under a basket watching his son play was Duke Patronski, the Teen Center supervisor. He was tall, lanky, with wire-rim glasses and a large handlebar mustachio. He was also a very proud man. His friend, Paul, another recreation supervisor, was next to him.

“Duke, you can’t leave your job for the lengths of time you do and not expect something like this to happen. Tim is talking about moving you to the Senior Center.”
“I’ll fight it. We have a union. I’ll talk to ‘em.” said Duke.
“You’re not in a strong position. You were absent. They’re going to want to know why, for how long, and how often,” said Paul.

“That doesn’t matter. I have a great record with the city.”
“Well, good luck, but I don’t think you’re gonna get any traction…So what happened at the trial?”
“The cops. I can’t believe the cops. I saw one of them lie on the witness stand.” said Duke.

“Lie?” Paul gave him an incredulous look.
”Yes, lie. He said they interviewed Nick in my office for about 10 minutes. No way! Try 2 hours! I had to wait outside while they were questioning him, which they weren’t legally allowed to do unless they read him his rights and brought him into the station.” said Duke.

“What happened that night?” said Paul.
“It was hockey, Nick was coaching. Their team lost. Nick and this kid, Jimmy, were in my office. Jimmy was all upset after losing. Nick tried to comfort him, gave him a hug, told him he’d played a great game and not to blame himself.

Apparently, after Jimmy pulled away, Nick asked him if he could hug him again. Jimmy asked why. Nick just said he’d like to hold him again. The kid got scared and ran out of the office,” said Duke.

“He wanted to hug him, that’s it?” said Paul.
“Seems so. I talked with Nick’s mom. His parents are divorced. The dad never had anything to do with him. She said she felt bad, Nick really needed a father. He never understood why his dad wouldn’t see him.”

Right then Duke’s son, Sam, had the ball. He wasn’t sure what to do with it.

“Go for it, Sam. This is your chance!” yelled Duke.
Sam hesitated, looked around, then passed the ball.
“I wish he’d be more aggressive. He could’ve at least tried to make a layup,” said Duke.
Some boys on the top row of the bleachers were watching the game.

“The guy’s a pervert. That’s what I told the cops,” said Arnie.
“No, he’s not. I’ve been alone with Nick plenty of times. He never did anything to me. All we talked ever
about was girls,” said Mike.

“He’s a perv and shouldn’t be around kids,” said Arnie.
“Nick’s not a molester, but I still don’t like him. The way he used to lecture us all the time, calling us ‘Gentlemen. Listen up gentlemen!’,” said Teddy.
The boys laughed.

With 4 seconds to go, the score was 38-36, Eagles and they had the ball. Their best player was near the
Shark’s basket signaling. One of his teammates passed the ball to him, but it was intercepted by a Shark
who dribbled to the center line and gave it a desperation toss towards the Eagle’s basket.

With the ball
mid-air, the buzzer sounded game over. The ball sailed high, then arced down and straight in with a
gentle whoosh of the net, final score: 39-38 Sharks.
“‘Gentlemen!’ Ha! He sounded like my dad. He was no fun. I don’t care if they do throw him in jail.”