Two sisters share a night of chilly psychological terror. Will they get to the root of evil in this room and solve the mystery surrounding this house? 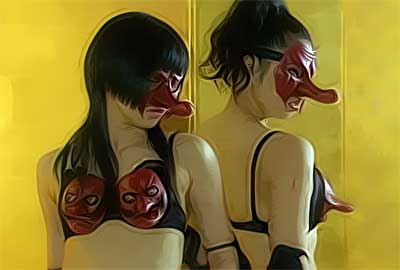 One of the reasons, Leo, I remembered this episode so vividly was because there were children involved. As I said, it was a dark and stormy night:

“You’d think after three days, this storm would go on. I’ve never seen so much snow down in this area, upstate, yes… But here, no way. I can’t even see the sky, forget the stars,” I whined.

The only one listening to my complaining was my younger sister, lounging, one leg thrown over the recliner chair armrest. She attempted to force a smoke ring in my direction, laughing, as I dodged it. “You know Evie, there are times, you need a good smack, and I’m willing to do it.” Scowling, I plopped in the partner chair.

“Come on, Sis. I’m just trying to get you out of this foul mood. Yeah, yeah, yeah,” she said, holding up her hand in the classic speak to the hand gesture. “I get it. It was a bloody long seventeen hours with two kids in the back seat, but as you said it was three days ago. Besides, you and Hal brought this with you… You rolled in with, close on your tire tracks.”

“Sigh. You’re right, Evie. But, I’m also in a foul mood because of Perry being ill. That damn cold spot that seems to hover over the bassinet, no matter where I put it in that room. Where did Mom get this home to rent for the winter? It’s in the middle of nowhere. Okay, uncock the eyebrow – so it’s on the highway, but there’s nothing for… What…? A mile on either side and nothing but woods behind and across the way.

You heard her when she first took me upstairs to see our sleeping quarters. Quite a large area, sunny, but I knew the moment I stepped over the threshold, there was something majorly Hinky about that room. The hair on the back of my head lifted – Mom finally admitting someone had died in that room. Jeesh!”

“Got it in one. You always were a quick study.” Looking at her watch, she said, “It almost is time. I’ll take the candles. The board game is over with the rest of the games – get it, would you?” Evie motioned to the sideboard as she left to get drinks. She had already plunked the candles down on the table with matches.

She was a terrible one for tone. Answers, she said. Yeah, right. Ouija. I’d heard of this before. We called it the yes and no board, but the name is yes, yes. Figured I’d let her have her way… But when she got caught moving that pointer…. My thought was interrupted by her return.

“Here, we go… A Scotch for you and a Rye and Coke for me. Brought the bottles too. Don’t want to stop the flow of the evening,” she said, as she slipped the bottles from where she had tucked them under her arms.

“Okay. This is your show, Evie. I’m not crazy about talking to ghosts or spirits or whatever you want to call them, but I’ll play along… For now.”

The pointer, the planchette it’s called, started moving. I looked at Evie. “Quit that,” I hissed.

“It’s not me! Look, no hands,” she said, as she raised her arms up, her cigarette dangling from her left hand

The planchette continued to move. “Quick, use that pad over there. Dad left a pen with it too.” We had been playing Pinochle that evening before Dad and Mom and then Hal and the boys had headed off to bed. I grabbed it out of her hand and started writing the letters it was swiftly hitting on.

I had kept my eye on it from the start of movement, so I saw all It spelled out: MYWIFEWASKILLEDBYANINTRUDERINTHATROOMANDSHELOSTHERBABY – the hair again went up on my neck as I broke it into a sentence: My wife was killed by an intruder in that room and she lost her baby.

“That’s it, Evie. Enough for me. This is no game. Either you have pulled some kind of stunt that I cannot figure out how, yet, or this is real. I’m going to bed.”

“Don’t you want to say something back to the spirit? You’ll need to use the pointer.”

“Not a chance. If that thing can move like that without help, it can understand me.” I stared intently at the board and forcefully said, “Stay away from me and my family. Leave my baby alone, for God’s sake.” I took my drink and started out of the room.

Evie yelled, “Hey, wait for me. Don’t want to be down here, alone.” She quickly blew out the candles, and assured me all the way up the stairs, she had nothing to do with the movement. In fact, she said, it scared her more than it did me. She would never yell back at it.

When I got to the bedroom, I flipped on the light, to check for the cold spot. It was gone, but when I pulled down the blind, went and turned down the covers, I glanced back at the shade. There was an evil face imprinted on the shade. I sat up that night, arms crossed, and glared at the impression. I fell into a light sleep towards the morning as dawn broke. The following night the face was not there, and I never saw it again.

I had my mother look into the history of the house. The house was quite a new house, less than twenty years old, and no one had died in the house. But Mom was not satisfied with that answer since the incident had spooked her too, hearing about it. She kept digging and finally found the evidence, the one that made sense. When the house was built, the owners were told they were building on unholy ground. It had been land where squatters lived, and one of the pregnant women had been murdered by her jealous lover who had accused her of infidelity. The reason the house was rented was that no one lived in it for more than one year.

“So, Leo, I still get chills from thinking about that encounter – but I was not going to allow fear to overwhelm me and have my child continue to be harmed. Mom told me that they didn’t have any more problems with that room. She and Dad continued to rent it for the wintertime when they came off the beach from their seasonal managership situation except I refused to sleep in that room again.