Albert stared in disbelief, he was sure he had seen a door out of the corner of his eye, and yet when he focused on the wall ahead of him there was nothing. 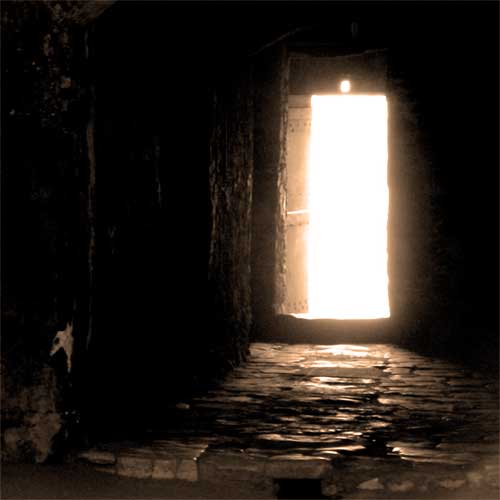 At the same time, his ears tuned themselves in for any audible sign that his fingers may have found a catch of some sort, which, he hoped, would release the elusive door’s locking mechanism, but no sound emanated from the seemingly solid stone wall; in fact, it didn’t dawn on him that he heard no sound of any kind within the space, or even where the space that he occupied at that particular moment in time was.

The door appeared to be approximately four feet wide by six-foot-high. It had three panels inset into it, one large arched panel at the top with two small plain rectangular ones below it sitting side by side. There appeared to be neither keyhole nor handle anywhere on the door, nor was there any visible sign of any kind of hinge, and yet the outer edge of the door was also clearly defined within a doorframe.

Panic immediately set in as Albert realized to his horror that he was being subjected to his lifelong recurring nightmare of the elusive door yet again, only this time he was wide awake, realising too late that the nightmare which he had suffered from since childhood ever since he had got himself locked into the priest-hole in his childhood home, the old Elizabethan farmhouse when he was five years old, had now become a terrifying reality.

This time, his relentlessly cruel nightmare had had enough of his escaping back to his human reality, denying it the cruel pleasure of his company, and had decided to wall him up forever in the seventh dimension where the worlds of nightmares like his are their own reality.

Albert screamed as the door in the solid rock within the space opened briefly, pulling him into the seventh dimension beyond before it closed behind him forever, sealing him off from his three-dimensional world, never again allowing him to appear to any other mortal, nor to open for him to retreat back to his reality.

Albert’s screams went unheard. His sweat-soaked bed in the real world was now empty. When his bedroom door was next opened, thanks to his nightmare, no one would miss him. To the world at large Albert had simply never existed.