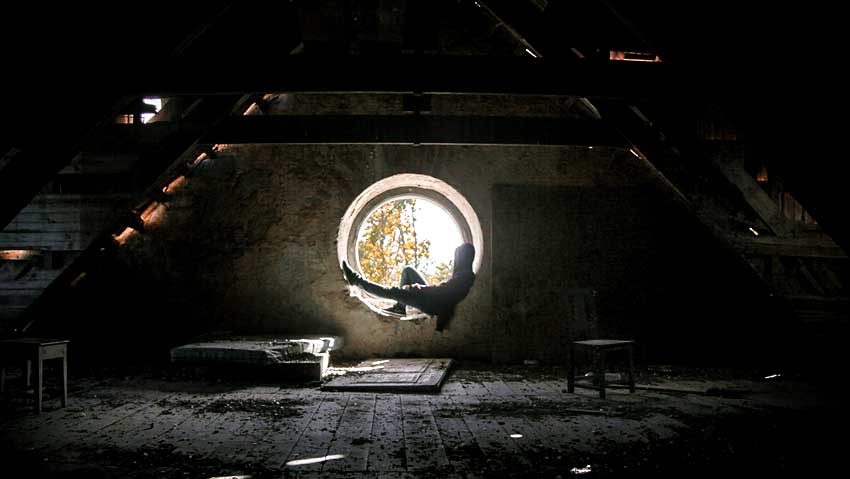 I couldn’t have been older than eight when it happened.

Weekends in summer, my parents and I stayed at my maternal grandmother’s house in the country. It was a huge century-old Queen Anne farmhouse.

The halls were wider than my bedroom at home. The room I stayed in had a genuine canopy bed in it with curtains and everything. The room seemed bigger than our whole downstairs in town. I loved it.

Daytime, I would sometimes play outside under the huge oaks and elms or go to the creek in the back and pretend I was fishing.

Mostly, though, I would play in the house, solving mysteries a-la Scooby-Doo or hunting ghosts or vampires.

The attic was my favorite place. It had several oddly shaped rooms formed of the roofs of the various sections of the house. Worn hardwood floors with steps up or down led between them. There were boxes and chests full of treasure (clothes and silverware; boxes of photos and old books and, yes, a bit of jewelry).

I never told anyone, but in the wee hours, I’d sneak back up there to play. I’d pretend to be wakened by a strange sound from up there. Immediately, I’d say to myself, “Ghosts! Better check it out.’

That night, I actually did hear a noise. It wasn’t the first time, either. When I’d asked about it before, Grandma said squirrels ran along the roofs and sometimes snuck into the attic. They never stayed, though.

The noise was different that night. Louder; lower.

Putting on my slippers and tying my housecoat over my Buck Rogers PJs, I headed out into the hall.

A permanent set of stairs lead to the attic from a small room in the corner of the upper floor. I could only there by going along a narrow outside walkway from the end of the upstairs hall. This meant sneaking past my grandmother’s room and my parent’s room. But I was good at sneaking.

The door leading to the tiny balcony was smaller than any other door in the house, almost kid-sized. It had no lock, but it did stick. Getting it open quietly was a challenge, but one I’d accepted and won before. Patience was the key.

I turned the worn brass knob, being careful not to let it rattle. Leaning against the door, I changed my weight from foot to foot, back and forth, applying pressure on the jam with my shoulder, each time a little more.

The door gave a little, making a small noise.

I stopped and listened.

No sounds of wakefulness from the bedrooms.

I repeated. Again, success and a small noise. Again, no bedroom queries or shuffling of slippered feet.

Twice more, and I had the small door open.

I was cool outside, with a bit of wind. I quickly closed the door (not all the way, of course) so the breeze wouldn’t get in. That would be a dead giveaway.

The railing consisted of fat, fancy-lathed wooden posts and a rail painted maroon long ago. It was about chest high on me.

I always felt like I was in a horror movie when I was up here at night. That night was especially good for it. Wind made the oak leaves roar. A fat, white moon high up trailed shreds of cloud. I even heard an owl.

The other door stuck as well, but it was two walls away from the hall, so I just yanked it open. Inside was a disused room, about six by six, with dirty windows and steep ladder-like stairs along an inside wall. Up I went.

A narrow trap door blocked my way. It had no lock, and the latch had long ago been bent to uselessness. It was a bit heavy, though. Still, in a moment, I was in the darkened attic.

Except it wasn’t as dark as it should have been. At first, I thought it was the moon shining through the small, round windows scattered around the roofs. I turned to face the source.

A window just on the left wall near me faced the direction of the moon. It didn’t let in enough light to let me see my hands. Ahead, on the same side of the building, a soft white light was shining. Almost, it seemed like that end of the attic was foggy.

I admit it; fear grabbed me. Somewhere inside me, though, exhilaration howled. I can admit now that I’ve always wanted contact with something extraordinary. That night I got it.

I advanced toward the light. My mouth tasted of the old pennies I sometimes licked (I was a weird kid, okay?). I felt a pressure in my gut, like I would soon have to poop. Moving silently, I was sure I’d have heard the smallest sound. None was made.

As I got closer, the mistiness remained. It wasn’t fog. The light was just–weird. It came from the small octagonal roof over the curved stairs that ran up what I always thought of as the tower. The entrance was low and triangular. I had to squat every time I went there. An adult would have had to crawl on hands and knees.

I stopped for a moment to get up my courage (vaguely ashamed of myself for needing to) and proceeded. Four steps led up to the entrance. The almost tangible light enveloped me by the time I reached the top.

The room was tepee-shaped, with no windows or other exits–until now.

Leading off seemingly into thin air over the driveway was a large hall. The light came from huge open windows all along its right side. By one of them was a Lady.

She was white, this Lady. Not like me or my family, but stone white. Like some stone, she sparkled silver. Parts of her skin (under cheekbones; in the hollow of her throat) were the palest blue. Her hair was wavy and deepest red. Gold threads (also hair, I realized later) wound through it. White combs held it back from her face. She wore a pale green dress that ended high enough to show she was barefoot.

On one slender hand on a vertical slat helped balance her as she looked at whatever held her attention outside. One foot was flat on the–wood? Stone?–of the hall floor. The other was back, two toes bent back and resting on the ground, the small ones slightly curled in the air.

Beautiful. All I could think was–beautiful. Puberty was some years off for me, but I knew things in an intellectual way. This Lady brought home for me what some of those things must feel like.

I don’t remember making a decision to go to her. I just did, without thought.

She didn’t seem to know I was there until I was in the hall. She turned and smiled at me.

Her eyes! Red, like liquid rubies; gold flecks floated in them.

The Lady held out a hand. “Hello, Daniel.” She talked funny. There was an accent there; I didn’t know. It seemed perfectly natural that she should know my name, this Lady.

I moved close and took her hand. It was soft and warm and firm, her grasp. I wasn’t an especially tallboy. Even so, my head still came up past her shoulder.

She steered me around until I was looking out the window. “Look an’ tell me what ye see.”

There were trees. They couldn’t be anything else. They looked taller than mountains, wider than cities. Pale grey trunks went up and down father than I could see. They were everywhere. There was no ground or sky, just trees fading into a white mist.

“Why do the branches have gems on them?” I asked the Lady.

Her reply was a laugh like the songs of angels. “Those are cities, they are!”

I looked up at her, unbelieving.

The Lady’s answering smile did not mock. “’tis true, it is. This–” she indicated with a sweep of her tree arm everything in sight–”is th’ world of Aelfen, home o’ my people f’r uncounted years.”

“How did you get in the attic?”

“I don’t rightly know, Daniel. Sometimes a Portal opens of its own accord; it does. Best ye be gettin’ back afor it closes an’ traps ye here.”

“But I want to stay with you!” Nothing had ever mattered more to me. Even now, I can feel the intensity of that desire, unfaded by two decades.

“No.” Something grabbed my chest. It was hard to breathe. The vision of her smeared in my sight. A tear rolled down my cheek.

She hugged me close. She smelled of spices. Her hair was the softest thing I’d ever felt. Her dress was like warm ice under my hands.

In my ear, “Ye’ll havta go back ta the world, Dear Heart. But don’tcha be worryin’ about it. One day ye’ll meet Daevara again, ye will. I promise.”

I accepted that promise without question.

It seems a dream now, the trip back to bed. I don’t remember falling asleep again.

Six more summers, I spent my weekends at Grandma’s old country house. I never played in the attic again. In the years since, I’ve never gone back to that house, not even when Grandma died.

Now my own parents are dead, and the house is mine. I face a choice: sell the house without having been there in fifteen years, or keep it–and dare that attic again.

But I’m still afraid.  What if Lady Daevara isn’t there?

Gideon Jagged (1963-) was born in Toronto, Ontario. He has degrees in Philosophy and Computer Science and worked for several years as a software developer. He has been writing professionally since 2000.

His short stories and essays have been published in several newspapers, e-zines, and elsewhere online as well as the bi-annual periodical The Solstice.

His latest novels The Fate of Stars; a Romance and Exiled are available on Amazon in eBook and paperback.

His newer short fiction and essays can be found at http://AlchemyOfTheWord.me.

He lives and works in Toronto.

Alan Place May 10, 2012 2
The True Story Behind 'The Colorado Kid' I dare say many of us have read Stephen King's novels at some time.…
Publishing