Eastgate park was set on a steep incline of land along the main road called Newport Way. The park was typical of the region, covered by thick fir, cedar, and maple trees, lots of moss, ferns, and a few meandering streams.

The dense undergrowth had a pungent damp and earthy smell typical of the northwest. It was a wonderful place for kids to run around and play. The road leading into the park was paved only at the entrance, then it became dirt and gravel. Farther up you’d pass a steep clay bank facing the road. At the top of the hill was the baseball field. There were three boys playing at the clay bank. 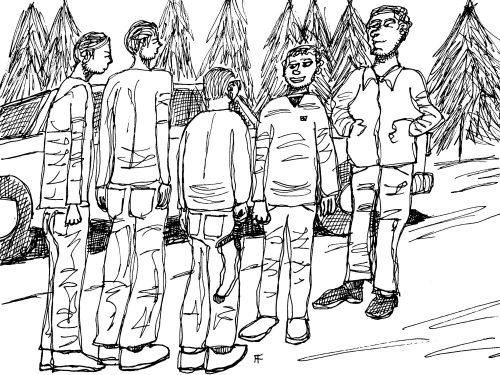 Tim, the youngest, was busy digging with a stick and making designs in the clay’s moist surface, while Walter, a year older, stood by the roadway, a slingshot dangled at his side. The 3rd was Nick, the oldest at 13, who stood behind a small tree watching the other two. He called out, “Wanna go to the bowling alley and play pinball?” Walter shrugged his shoulders, then pulled out empty pockets from his pants with a silly grin, “I don’t have any money.”

Walter lifted the slingshot, stretching the rubber bands, pulling them back as he held the little leather pouch, then snapping it at the ground. It was a homemade job his dad gave him, built from a Y-shaped tree limb, the rubber band was cut from a tire inner tube. It could shoot a far distance. He practiced with it a lot but still wasn’t as good a shot as his dad.

Tim was marching his plastic army men along a ridge he’d carved in the clay, “Wish I’d brought my army hila-codder.”
Nick, still behind a small tree fingering the complex pattern on the fir branches and Walter, slingshot dangling again by his side, when a blue Plymouth sedan came down the road from the baseball field. There were 4 teenage boys inside, the oldest driving. It had been a while since it’d rained and the gravel road was dry. Pebbles and dust kicked up as they drove by, some of the pebbles hitting the underside of the car. Walter heard them drive past.

Then it happened. The brake lights came on, they stopped, then began backing up, backing all the way to the clay bank. The boys got out of the car. The driver was tallest, with dark hair. Walter recognized him. A few years back he and an accomplice stole his bicycle parked in front of the Wigwam store. He did get it back, but not without the help of the boy’s father and the local police. They surrounded Walter.
“Hey what do you think you’re doing shooting rocks at our car?!”

The one who spoke looked like the younger brother of the driver. He was blond with piercing, inquisitive eyes and a malevolent grin. The older stood over him, smiling as well. The other two boys were behind Walter, he couldn’t see their faces.
“I didn’t shoot a rock at your car,” Walter said.
“Yes, you did. You calling me a liar?”
Walter didn’t know what to say, he just looked at the blond boy. Tim froze and Nick, still behind the tree knew who the boys were, being closer to their age, remained out of view.

The blond boy looked back at his brother for a moment and then to the other two boys behind Walter. He drew back his fist and punched Walter in the mouth hard enough to make him stagger back a bit, his jaw stung from the blow. It happened so fast. Walter just stared at the smiling blond boy who seemed pleased with himself, he even began to laugh, the others joined in.

“That’ll teach you to shoot rocks at cars, “said the blond boy. He stared into Walter’s eyes savoring the moment, like: I got you and there’s nothing you can do about it. Tim and Nick, dumbfounded, just watched.
There didn’t seem to be anything more to say. The four got back in the Plymouth, still chuckling as they watched Walter’s stunned expression. Then they drove down to the main road and turned right out of the park. Suddenly Walter remembered the last name of the brothers, Hudd. Nick had mentioned them before. They were local toughs in some sort of gang.

With this event, the clay bank lost its fascination for the three friends. They decided it was time to head home. Nick said, “That was the Hudd brothers. They’re bad.”
“Do you know them well?” said Walter.
“I see them at school sometimes.”
“Why didn’t you tell them I didn’t shoot a rock at their car?”
“I was going to, but he hit you before I knew what was going on.”
“Couldn’t you still have said something after?”

Nick didn’t reply. The truth was he’d been afraid to say anything and why he stayed behind the tree. He didn’t like to show fear, didn’t like to show any weakness since he was the oldest, and felt superiority over Tim and Walter he didn’t want to lose. He wasn’t a tough guy like his dad, a fist-fighting longshoreman, but still, he tried to act tough in a mental way.

When the three said goodbye, Walter could tell Nick was upset, giving him a cursory look as he left. Walter returned to his house and walked in the back door, through the kitchen where his mom and dad were. He told them what happened in the park.

His mother, busy cleaning yellow stains off the countertop with a scrubbing pad, shook her head and gave him one of those looks- what did you get yourself into now? His dad, leaning against the counter, turned his attention away from a little motor he was tinkering with and reacted angrily, “I would have punched you in the mouth too.”
His mother said, “Did you shoot a rock at their car?”

“No,” said Walter.
“Then why did he hit you?”
“I don’t know.”
“You’re not telling us the whole story are you?” said his dad.
“As much as I can remember.”
“I think your memory has left something out.”

Walter, scared of his dad, didn’t say anything back, just hung his head and went up to his room. Sitting on the bed he looked at the slingshot and decided it wasn’t a good idea to walk around with it in the open anymore, better hide it next time. Going to the desk he put it away in the bottom drawer. He looked out the window, the clouds were heavy and gray with the darkness coming on fast. He wondered about the blond boy. It was then Walter got mad. Why hadn’t he defended himself better?

He didn’t have to punch him back, but he could have tried to argue and prove them wrong. He should stick up for himself more. Maybe Nick would have helped him if he had tried to fight back. Maybe, or maybe they all would have ganged up on him. He reasoned there were different types of people in the world, he was one type, the blond boy another. He tried to put himself in the blond boy’s shoes, but couldn’t. It just wasn’t in him to be that way. Leaning against the window ledge studying his reflection in the glass he made some funny faces. Outside it was raining now, it was really coming down.