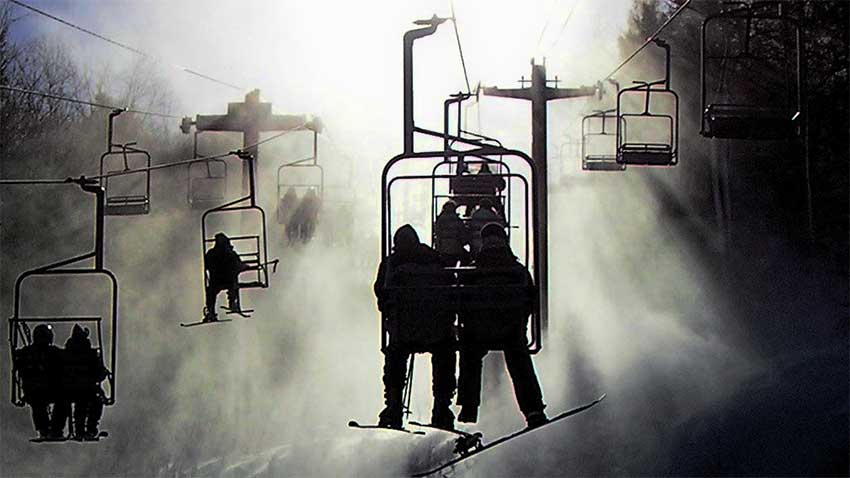 I had always been afraid of heights since falling from a school climbing frame when I was about 5 years old.

Here I was in the worst-case scenario I could have ever imagined. Beyond the realms of nightmares, trapped half on and half off a ski-lift heading up the mountain over the Rhine with the ground dropping rapidly away from me.

“How did I get talked into this?” I thought as I struggled with the dangers of escaping from this horror.
Only minutes ago, my friends had talked me into going up the mountain, they had all agreed it was the only way to see the castle.

“I am afraid of heights!” I had protested profusely as they cajoled me.

My friend Geoff had said “If you don’t do it, you won’t get up there, as there is no other way”
Geoff was always forceful and yet in a kind way, this was his idea from the start, and now look where I am.
As I got on all I could remember thinking was “I am not going to enjoy this.”

Tony Nicholls, one of my best friends had assured me “It won’t take long, it is only a short ride up there three of four minutes at the most.”

I had seen so many people just getting on and off the lifts down here, it looked so easy. Wait until your feet touch the ground, then just stand up and leave the chair behind, for its return trip. The never-ending journey up and down the slopes, skiers use them all the time. I did want to see the castle.

“They are right, this is the only way up there.”
“See you up there.”’ Geoff said as he climbed on his chair.
It all looked so easy, what could go wrong, yet here I was scared stiff.

On the ascent, everyone was laughing and joking, looking at the scenery as they climbed over the pine trees below. A sight that I should have relished but not today, as I stared at the mountainside ahead and prayed I would get there, all I saw was the back of Geoff’s body.

“Please let me get there safe!” I kept repeating it like a mantra, as the further up I go the worse the fear grips.
I could hear the laughter of friends as they look forward to getting off at the top, and yet my mind kept saying to me.
“Keep praying, for this is your nightmare!”

I had never felt safe on a ladder or anything higher than five or six steps, yet here I was travelling over the Rhine, the only thing between me and my nightmare end, was a tiny wooden slatted seat and the metal pole between my legs, no rail nor belt, just me holding on for life, shaking like a leaf in the winter winds.
As the people ahead got off the chairs rocked slightly, yet something more to unnerve the wary.

The ground was starting to get closer, I could see the treetops clearly.
“Thank you, Lord!”’ I whispered hoping that the terrors were over. Little knowing, they were just about to start.

As my feet touched the ground, I tried to stand but could not as something in the back pocket had got jammed. With the seat turning the corner for the return trip now.
I tried so desperately to get free, in my panic, all I was doing was making my situation worse as whatever it was, was getting wedged firmer. As the seat touched the backs of my legs all I could think of was.
“This is it!”

I was not on nor was I off the seat and the chair was pushing me forward, knowing soon the ground would fall away from under me, I would lose my footing and be above the trees with my weight well forward on the seat. With the worry of ending up on the ground dead, I tried to free myself faster.

Putting my hands behind me, I grabbed the box of liquors in the pocket, and yanked them free, just as the chair gave a final lurch and moved on down.
“What on earth was going on there Al?”Geoff and Tony asked.

“We thought you were a goner mate!”
“That makes the three of us, I have never been so scared in my life as those couple of minutes, believe me. THAT has done nothing to cure my fear of heights.”
“What was the problem? Why didn’t you get off when it turned?”

“You remember those chocolates I got?”
“Yes.”
“They were in the back pocket, and had slipped into a gap in the slats, and got jammed, and the more I tried to free them, the deeper they went in.”