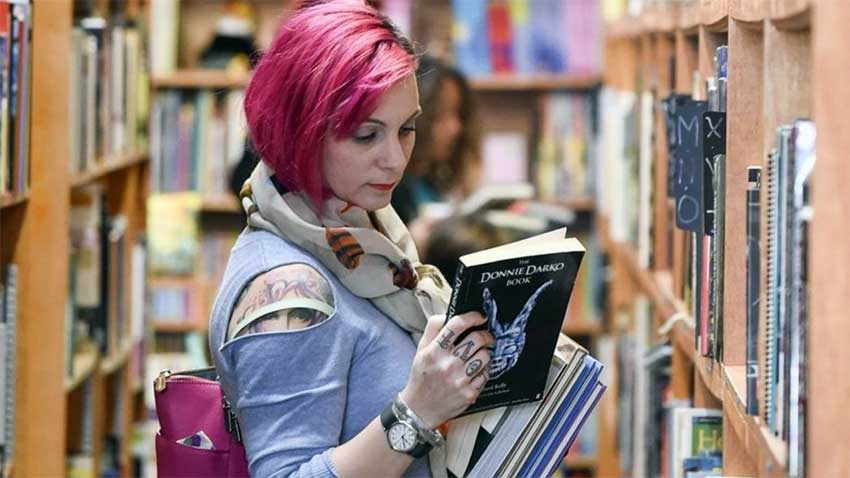 Brenda Simpson was certainly no stranger to bookstores.  No libraries, mind you, but bookstores.

The libraries she knew did not feature the occasional pleasant little café area or Starbucks for a short sip, munch, and look around, as shopping bags, heavy or light, rested on their own.  And lately, she had more and more sought out the two or three such venues near her apartment:  book browsing, trinket handling, and invariably settling at a little table for two near a window to take stock of things.

Her thirtieth birthday last June had come and gone with something less than the resultant ennui her chattery, friendly female officemates had promised her.  Brenda had a loving family, a few genuine friends, and the current, and admittedly, customary lack of a male escort and close companion was surely nothing to be overly concerned about:  she was smart enough, educated enough, pretty enough, and, even, self-confident enough.  So there.

She ruminated thusly one Saturday late afternoon at a table at Book Bazaar.  In fact, she smiled an audible snickering smile at the thoughts.  Many would envy her and her current blessings and freedoms, that’s for certain.

The next Saturday she was back.  A more than usually lengthy early afternoon shopping expedition had her a bit tired, and she plopped into the same chair, this time before any book purchase considerations.  Perfect little seat and table and view.  This was her place, she decided.  In fact, she had patiently waited nearly 15 minutes for the spot to be available, bags and parcels resting comfortably on a long bar-like counter nearby.  I mean, it was surely nothing so unusual to feel most comfortable in some certain location in a room:  students do it all the time in classrooms, by their own choice.

In fact, another harmless little routine had commenced that day, with parking in the Book Bazaar parking lot (not necessarily in the very same parking spot—not if it was currently unavailable, of course), walking past the bookstore and to the beginning, on the south end, of the four-block shopping district, then casually strolling up the blocks and stopping in whatever retail outlet struck her fancy, and concluding with the bookstore café.  Then it would be back to the car.  All-natural enough—and in fact rather well-strategized, she couldn’t help but think.

Three Saturdays later, sitting and sipping at her customary spot, after an unusually long turn around the bookshelves, Brenda firmly fixed her thoughts on co-worker Marcy Blair.  “Mrs. Blair.  Unbelievable!  She talks of nothing but the dubious achievements of her three kids and her lazy, apparently good-for-very-little husband.  She has all the grace and subtlety of your average firecracker.  She has all the sex appeal of a frog.  Maybe the educational background of a steelworker or something.  And yet she has the nerve to lecture me about sociability, about “branching out,” about involvement….”

“Is there something wrong with your latte?” asked a perky barista.

Brenda started and looked blankly at her.

“Well, it’s just you were shaking your head, so….”

“Oh, no.  No, no, no.  It’s just fine!” Brenda remonstrated, a little perturbed at the intrusion on her silent monologue.  “Thank you, though,” she said in pleasant enough recovery, smiled forcedly, and rather quickly picked up her two medium-sized bags and was out the door.

The next few weeks, through November and head-on into the crush of the holiday season, went by in a progressively mad flurry.  But it was more the rush of traffic and shoppers than the purchasing and wrapping of gifts for Brenda.  There were some to buy and deck out, of course, but the total started seeming to her somehow on the measly end—as talk at work turned more and more to such activities, including the annual “Secret Santa” gift-exchanging tradition.

About a week before Christmas, Brenda arrived at the Bazaar to find all café area seats taken and an unofficial waiting line of hovering, hawk-like prospective seatees.  It was therefore to be a few turns around the shelves.  Perhaps a seat and some sipping later.

Before she had stepped four paces, a vibrantly decorated display rack caught her eye.  Copy after copy of the same cover and title, complete with a heartwarming image of a woman so pleased, so obviously proud, so secure in all aspects of her life, that it fairly cried out of contentment.  Be Yourself by Next Christmas.

“That’s it!  Epiphany city!  Ok, where are the rest of the self-help books?  Where’s that section?   Ok, Mrs. Blair—there’s a Secret Santa coming for you…”

Scampering, though bag-ridden, Brenda located the sought-for section without the assistance of an employee.  She proceeded to approach her task systematically, viewing each and every title.  At least fifteen hectically-spent minutes passed before she reached the titles on the bottommost right.  But still no perfect title.

Brenda shook her head in rising exasperation and emitted an audible sigh.

Just then, a passing employee approached.  Brenda knew her.  She beckoned animatedly.

“Can you help me find a self-help book with a title that just screams out the bottom-of-the-barrel coming, that just cries of desperation and need, that simply reeks of a last chance at normality–and even sanity?”

Her eyes widened in imploration and her arms involuntarily reached out.

“You know, Ms. Simpson, I must say, I’m just soo proud of you!  Most people wouldn’t have the nerve to ask someone here about a book like that.”