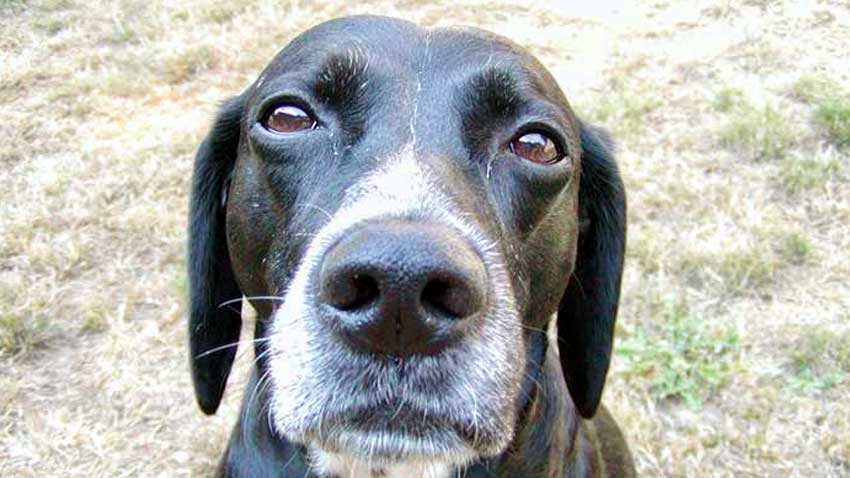 She came on Christmas Day and she left the day after Christmas. There were 16 years between the two days.

I became aware of my husband’s sense of humor when I first met Nolan, for I stated “her tail looks like a ____,” my husband finished my sentence for me with the word “turd.”

Nolan had the longest bobbed tail ever worn by a German Short Hair Pointer, it was the length of two bobbed tails, had two knots in it yet it wagged all the time. Nolan was always on a “diet”, she was not a large dog yet she could become one if left with an ample food supply.

She was not keen on leaving food for others or on saving some for an afternoon snack. She was scared to death of strange dogs and I use to have to drag her by a yard that contained a dog while on a walk; in our neighborhood, I pretty much had to drag her around the whole block.

The first time I participated in the local “Mutt n’ Strut” she shook so badly that I had to carry her. Nolan had the shaking down, if she saw me looking out the back window and she wanted in, then she’d start shaking as if she was freezing.

At bedtime, once the other “girls” and I were in bed, if Nolan wanted up she would walk around the bed and whine for me to lift her, for her back hips were not what they use to be and she could no longer jump up onto the bed. If Nolan wanted up on the bed, then I was happy to oblige.

I lovingly referred to Nolan as “Nolan the Goof”, yet Nolan was smart when it came to hunting.

She lived to go hunting out west with her Jeff. She loved her Jeff and would walk by him in the fields until the other girls had sniffed out the pheasants then she would run to help them, making sure to soak up the rewards and praises for a hunt well done! Nolan’s favorite hunting was when she was on the scent of a skunk. The other girls would leave well enough alone, yet not Nolan.

Our home became well-stocked with Listermint and Hydrogen Peroxide, the ingredients used to bathe Nolan, in order to rid her and us of her skunk hunting adventures. Nolan hated the tub and while washing her she’d plead with her big brown eyes as tho she was saying “please let me out of here, I promise I’ll never hunt another skunk” ….her promises were short-lived.

Nolan was great at pretending she was innocent, for she had those big brown eyes that always seemed to be saying “no not me, I didn’t do it, I’m a God Girl!” Around other dogs that she knew she’d growl, snarl and show her teeth if they tried to get to close to her Jeff, all the while sitting by Jeff’s side as if she had a halo on her head.

As in her hunting skills, she was the same when receiving love from her humans. She’d always hang back and then once she saw what was going on she’d butt her head in to have it scratched or hugged.

Nolan had a bad fall last night while we were at my folks’ house for Christmas. She broke her good hip and leg. By the time we found her she had lost a good deal of blood and was in shock.

I felt terrible thinking of all the times I hugged her last, yet that was her style, she knew the last in line received the best hugs. We left her at the vet to be cremated yet we brought her collar home with us. When I smelled the inside of her collar, I not only smelled Nolan, yet there was also a faint smell of skunk.