LUCKY FISH: “The slow, sad piano melody and the floor of the lake I knew intimately as a child.” 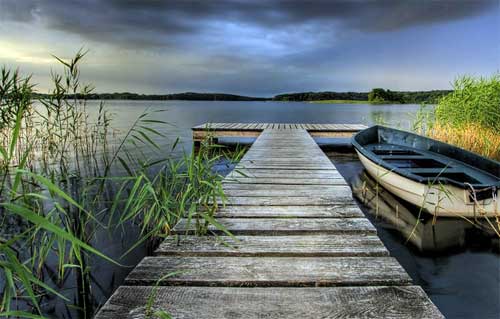 My mom, her friend Jackie, my daughter Angelina, and I all drove up to Lake George today. It was a cold day, and I didn’t want to stay outside, so I sat in the car trying to warm up while the three of them walked around the docks.

The winter snow melted before my eyes and suddenly it was summer again.

My family went sailing on this lake many times when I was a kid, but there was no having fun while sailing. That was not allowed. The Lark was no luxury liner – only nineteen feet long, two sails – a mainsail and a jib, and a tiny green centerboard. Except for my father, we all wished for a cabin boat with a big, weighted keel – they were safer and comfortable, especially when it was windy and cold. The worst thing to see on a lake that you have to sail in is whitecaps. When the wind blows the water into waves that roll so fast that the tops spill over with white the lake is not its usual dark bluish-green, but dark blue and white.

Windy or calm, we hated sailing. I hated sailing so much that the only time I got to go away to bible camp, instead of crying like everyone else who was homesick after a few days, I cried when it was time to go home. Especially since the day my family picked me up from camp we were going sailing. Oh, what a joy. To get yelled at all day long! If it was very windy my mom would beg my father not to take the boat out, but he was crazy so that never worked. Sometimes a gust of wind hit the sails, and even with all four of us on the starboard side of the boat, it leaned so far up that the leeward side would be taking on water.

Since I was the lightest person I would be ordered by the Cranky Captain to bail down there where the water was coming in. I was so scared of falling in or being swallowed up by a big wave. My dad would be at the tiller, steering the boat, and would hold the rope for the mainsail since he was the strongest. Still, his big strong hairy hands would get blistered from the wind’s pull on the sail. My mom would take the jib, and the rope would cut her hands as she wrestled with the gusts of wind. She hated sailing as much as Renee and I, but we all had to do what he wanted or he’d make life even more miserable.

When it wasn’t windy we were glad that it wasn’t going to be scary and we wouldn’t hear “God damn it, get that spinnaker up”, or “get the Spinnaker down”, “God damn it…”, ad nauseam. We were ordered to clean the leaves out of the hull or scrub the deck instead of lying across the deck, soaking up the sun. There was always some stupid job for us to do, anything but relaxing and enjoying the view.

One time my family went sailing on our boat on Sacandaga Lake. My dad got knocked out of the boat when the mainsail jibed (the wind changed suddenly, causing the sail to swing from one side of the boat to the other) and the boom hit him in the head. My mom didn’t know what to do; she panicked. She knew how to sail and all, but she just froze as we headed for a sandbar, which, if we hit it we’d capsize, and with my sister and I both crying, we did.

My dad was OK. Too bad, my sister whispered to me, and I nodded yes’ in slow motion. Not that we wished he had died, but at least if he had been knocked unconscious, then we would get to decide to save him or not. Maybe he would be too heavy for us to drag to the surface. At least we’d have had a choice. For once we’d be in control.
We all got the turned-turtle boat to a sandy inlet and righted it, bailed out all the water, and went home my mom and dad shaken up, and my sister and I disappointed about my father’s near-death experience.

Every summer my family would sail to one of the islands at Lake George and stay at a campsite for at least a week. My sister and I grew fins on that lake, swimming from one island to another, exploring, lying on the beach, and then swimming to the next. Sometimes we’d take the raft and take turns pulling each other on it. Ranger Island had a little store for the campers where we would get candy. Then we’d drift back on the raft, munching on Twizzlers, Tootsie Rolls, and my favorite, watermelon Tangy Taffy with the candy seeds, our upper bodies on the raft, and our legs in the water, kicking us to the next island. Too scared to smuggle the candy past father who paid the dentist, we didn’t go back to the campsite until we finished all the candy. Not a problem.

I loved to snorkel – I’d put on the mask, lay on the surface of the dark, cool water and peer into that secret other world – full of fish of all kinds, shapes, and colors – electric blue and daisy yellow, tangerine orange, chartreuse, fish a shiny silver like a new dime… seaweed waving on the sandy and rocky bottom. I used to pretend to be a fish and swim underwater with no gear, holding my breath, in awe of this secret world where fish lived their silent, peaceful lives. Never did they tell me what to do and if they didn’t like me they just swam away.

I’d gradually let the air out of my mouth, the bubbles lining up to get to the surface and pop until I ran out of air. Then I’d break the surface of the black water – water reflecting forest green mountains, sky, great white clouds, and pretend I don’t hear my father yell, “We’re going sailing,” dive down again, hiding in the silent world of fish. Lucky fish.
At night I’d lie down on the edge of the dock, my feet dangling in the cool water. I could see the lights from hundreds of boats reflected on black water and a million stars in the dark sky – as if I was in a glass globe turned upside-down. It was snowing stars and lights all around me as my life had barely begun.