Once upon a time, there was an old lion named Lino. Lino had been the king of a small feline community for some time.

He had had a very good time as a king. He had never taken part in any hunting mission. Why? There were others to do the job. The king was the first to eat from the prey. 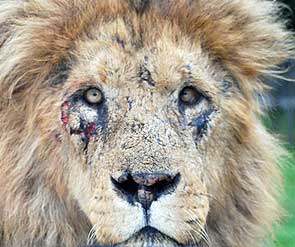 As he hadn’t hunted for ages, Lino became fatter and lost his hunting skills. He lost the loyalty of the members of the community.

They thought he could not protect them anymore and he just ate the prey and spent the whole day napping.

Besides, the young lion, Boldin, had become mature enough to challenge Lino. Lino also noticed Boldin’s strength and began to worry about his chances of survival in the community.

The following day, Lino sneaked out early in the morning. He walked and walked till he was exhausted. He lay under a tree to enjoy the shade while having a nap.

It seemed he slept for ages. When he woke up he felt hungry. “What to do now?”

He asked himself. “I am not sure if I can catch a small animal on which to dine. It’s getting darker and darker. Oh My God! I am really lost.”

Suddenly, he heard a noise. He stepped back and hid between the bushes. Soon he saw a hare. He jumped but the hare’s jump was much longer and faster. In a moment, the hare was many steps away from the old lion.

The lion took a breath, wanted to speak but couldn’t. The hare was watching him trying to anticipate his tricky movements. The lion didn’t move but smiled instead.

The lion felt embarrassed and tried to smile but couldn’t. He nodded and uttered, “You are right my dear hare. I am an outsider now. I am so lonely that I long for a new friendship. Can you become my friend?”

“Are you kidding me, old villain? I have never heard of such friendship. I bet you are dying from hunger and want me to be your dinner. Besides, I don’t like to be called ‘my dear’.”

“You don’t need to. I am too old for hunting.”
“That’s right, you look too old and unable to chase me but you are full of experience and so villainous that you are thinking to trick me into becoming your dinner…”

Suddenly, they froze as they heard two gunshots. After a while, the hare came a bit nearer and whispered, “Would you ask the hunter to be your friend?”

Caryl McAdoo Jan 22, 2014 6
Important Editing Tips ADJECTIVES and ADVERBS Be careful not to overload your story. Make certain every…
Society