The screams ripped through the morning air, sounding in many ways louder than the previous explosion. Figures appeared through the haze of dust and smoke. Some stumbling, babbling incoherently, others silent, wraith-like ghosts, too shocked to even react to the horror that wrapped about them in deaths shroud.

There was a pause, a preternatural moment of silence, and then the screams began. The wailing, pain-filled shrieks of the injured and the terrible raw cries of those desperately seeking loved ones.

The house of Kahlil Marek seemed to take the brunt of the explosion. Where moments before, family and friends celebrated a wedding, now there was little left but rubble and smoke. Kahlil had been standing on the street speaking with friends, when his world was shattered. Suddenly he was airborne, tumbling through a dark cloud of debris and noise that had once been his family. 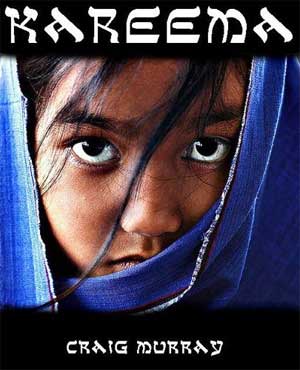 Neighbours and friends rushed to the ruins and quickly started to help. Shattered walls were lifted brick by brick in desperate hope of finding anyone alive. Kahlil was propped against a wall gazing in disbelief as the bodies were removed and stacked like so much dead wood near the road. He felt nothing, not the pain from his broken leg or torn skin, not the pain of watching his family lying on the street.

Kahlil was drifting in and out of consciousness when a great cry arose from the rescuers. A section of the upstairs floor lay propped over some shattered furnishings. The crowd surged towards it and the last thing he heard before passing out was “She’s still alive”.

“You are very lucky to be alive Kahlil.” said Ahmed. “Your leg is healing well, you would hardly know…”
“Know my whole family, everything I owned, almost everyone I know is gone?” he asked.
“You have Kareema, your sisters daughter, she is a gift from God.” said Ahmed.
“A gift from God? Everyone is dead except one girl, and not even my child! Why did God leave me like this?” said Kahlil.
“Lower your voice my friend, she is in the hallway waiting.” Ahmed said.
“And now I am to raise this child?” he asked.
“As your own for, like you, she has no one else?” replied Ahmed.

“Well I am glad to know that you are well, and the girl?” asked Tariq.
Kahlil paused for a moment, his brow furrowed as he thought.
“She is a very quiet and well-mannered child. My sister did a good job with her. I have had much help from the women in the neighborhood. They come to see we both are fed. They know that raising a girl is not a man’s task.”
“Well that is good. These people, all of us have suffered greatly, especially you. It is right for us to all join together.” Tariq said.
Rising he grasped his friends shoulders and kissed both his cheeks. Kahlil smiled and yelled over his shoulder. “Kareema, come here and say goodbye to Mr. Haleel.”

Kareema appeared and bowed, her hands clasped together, eyes lowered as she spoke. “My uncle speaks often and fondly of you sir. Thank you for visiting.”

Tariq smiled at his friend, his face displaying his surprise at the very formal manner of speech.
“You are welcome young Kareema. Listen to your uncle and be a good girl.” he admonished before moving to the door. He had just stepped through when Kareema’s voice cried out. “Wait! Wait!”
Tariq stopped, surprise growing as the young girl raced forward and hugged him.
“You are loved and will be greatly missed Tariq Haleel.” she said before bowing once again and running from the room.

Tariq looked curiously at the retreating figure before turning back to his friend and shrugging. Kahlil dismissed the girl’s behaviour as nothing more than a side effect of the tragedy.

The following day as he walked along the street he heard a voice calling.
“Kahlil! Kahlil, wait.”
Kahlil’s smile faded as he saw the look on his friends face.
“Achmid, what’s the matter?” he asked.
“Oh it is so terrible, so terrible. You were friends with Tariq Haleel were you not? Well last night, near seven o’clock, he was hit by an ambulance. He is dead my friend.” said Achmid. “He was loved and will be greatly missed.” he continued.

Kahlil’s heart lurched as Achmid said the last part, and he found himself leaning heavily on the wall.

“Oh I am so sorry, so terribly sorry. I had not thought, I mean, so soon after…” he said.

Kahlil shook his head and straightened himself up. “No, I’m alright.”

‘The girl said that. Did she know? How could she have known?’ he thought.

Pulling himself upright he stammered a goodbye and continued walking. Achmid said some small apologetic words that Kahlil never heard. Inside his mind was a storm of conflicting thoughts.

The days passed and soon enough he had put it all behind him. Kareema’s words, he decided, were little more than coincidence. It was a blazingly bright Thursday as he walked along the street towards the house he now shared with Kareema. Turning the corner he saw a scene of pandemonium. Ambulances, army, police and the ever-present crowd of onlookers milled or rushed about in front of his neighbor’s house. Immediately his thoughts turned to his niece, this was where she stayed while he worked.

Rushing forward he pushed his way until finally he spotted Waheed.

“Waheed! What has happened? Where is Kareema?” he asked.

Waheed turned with a grimace towards Kahlil.

“She is fine. She is safe, no one else is.” he said grimly.
“What…” stammered Kahlil.
“There were ten children my wife watched. Never did Allah bless us with our own but always our house was filled. That will be no more.” he said.
“Tell me what has happened.” begged Kahlil.
“The Coalitions were giving out candy to the children. Just behind us, by the school. The children begged my wife to let them go, and she did. A mortar bomb fell in the midst of them. They are all dead, all except that girl because she refused to go.”
“Why?” Kahlil asked, a ball of ice forming in his stomach.
“She just refused; she said nothing else other than to the other children.” Waheed said.
“What…What did she say?” Kahlil asked.
“She took each by the hands and said ‘You are loved and will be greatly missed.’ And then she sat and watched until it happened.”

Kahlil felt as if a train was racing through his head. The world spun and he staggered and lurched into the arms of Waheed.

“She cannot stay here anymore. My wife collapsed, they have taken her away. Never again shall these walls echo with the laughter of children.” Waheed droned.

Kahlil moved mechanically towards Kareema. Without a word being said she rose and fell in behind him. They walked silently into the house and silently into the sitting room. Kahlil dropped himself into a chair and sat in stunned silence.

“Uncle, are you mad at me?” the little girl asked.

Kahlil took a moment to respond. “Should I be?”
“No uncle, I have done nothing wrong.”

Kahlil tried to force the thoughts out of his head, tried to dispel the ghosts that seemed to scream at him. ‘She is possessed’ he thought. ‘Everyone died and she didn’t have a scratch. I know now what happened. The girl died as well but there was a demon waiting for a body to claim.’

Kahlil’s skin grew cold and he felt icy fingers creep across his skin. He had no doubt now, no questions whatsoever. He also had a plan. In his most forced and friendly tone he spoke.

“There has been too much death here. Too much sadness. I think we need a vacation, a chance to get away. Quickly now my niece, upstairs and gather your things, I shall get the car.”
“Where are we going uncle?” she asked.
“We shall drive to the coast, see the wide waters, the deep blue waves and get away from this place. Now hurry, get your things.”

Kareema rushed upstairs and quickly packed all of her meager belongings. Outside she could hear her uncle’s car starting. She paused before a full length mirror and brushed away a tiny tear. Wrapping her arms tightly about herself she said, “Goodbye Kareema, goodbye. You were once well loved, but you shall not be missed, goodbye.”

Not Entirely Up to You, Waiter