In Winning the Highlander’s Heart, Malcolm MacNeill can’t marry Lady Anice. She’s the ward of King Henry I, who had numerous mistresses, including a Welsh princess, and he’s targeting Anice next.

But she’s determined to get out of the quagmire she’s in. Her only living relative, her uncle, has died, and now some of her staff have gone missing.

King Henry allows Malcolm and his brothers to escort her home and determine what is happening at her castle in the Highlands. Only the Norman the king wishes her to wed, has other plans.

Malcolm and Anice must prove the Norman is a deadly advisory, and not let their own interests in each other get out of bounds or fear King Henry’s wrath. ‘Tis the ultimate in forbidden love in the Highlands!

In The Accidental Highland Hero, we have a story of Malcolm’s brother, James, who has rescued a lass from the sea, once by his own hands, once by his cousin’s. He still doesn’t know who she is, and when she remembers her duty–marry a laird through deceit–and she has other plans. Only her younger brother is still living with her ruthless uncle, and she has no hopes to get out of the trouble she’s bound for. Her uncle doesn’t intend to tell the laird who she really is, but pass her off as his own daughter rather than his niece. But James has other designs for the lass. Again, forbidden love. She’s betrothed, according to her uncle. Though she’s not who he says she is. 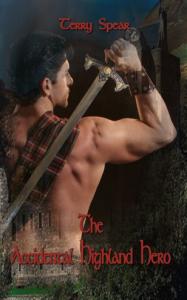 But I didn’t want to stop at hunky Highland heroes, just the normal variety. I wanted to write about the Highland wolf variety. Heart of the Highland Wolf was featured in Woman’s World Magazine!

Why do I love Highland romances so much? One of my ancestors was involved in Forbidden Love between a commoner MacNeill and the duke of Argyll’s daughter.

So I always wanted to give them a happily ever after in my stories. They did elope, marry, and left Scotland for the Carolinas. They were “hijacked” along with everyone else from the Highlands and dropped off without provisions in Prince Edward Island, because the captain’s brother needed settlers in PEI, since he had received land there from the king. The Highlanders’ minister, who had encouraged them to leave the Highlands, was the father of both the captain and the land owner in Scotland. Sound like some collusion there? Lady Elizabeth died because of the harsh conditions, and her two youngest children, a boy and girl, were raised by other families and married into the families. We’re directly descended from that boy.

So yes, forbidden love can have it’s drawbacks! In the real world. But in mine, they have to have a happily ever after!

This is one of the castles I visited in Scotland, Crathes Castle, with two friends. We visited 7 castles while there! Loved them and the whole of Scotland too!

“Giving new meaning to the term alpha male where fantasy is reality.”

Terry Spear also writes true stories for adult and young adult audiences. She’s a retired lieutenant colonel in the U.S. Army Reserves and has an MBA from Monmouth University and a Bachelors in Business and Distinguished Military Graduate of West Texas A & M. She also creates award-winning teddy bears, Wilde & Woolly Bears, to include personalized bears designed to commemorate authors’ books. When she’s not writing or making bears, she’s teaching online writing courses.

Angular Trifecta 10: Not Even Trying

sara tutorsindia Jan 8, 2020 0
Assignment Writing Assignment writing is a mandatory part of universities that can be challenging and involves…
Book Review