Joanna Clapps Herman tells it like it was for so many Italians growing up in America in the twentieth century.  Every story becomes more telling than the next—what a grounding read.

Here, Herman feeds and waters memories now that those who made those memories are nearly all gone and all the important old ones are gone. For me, that means two aunts by marriage and one 90-year old half-blood cousin are all who are left of my parents brothers and sisters.

Of course, a great deal of the charm of Herman’s stories is that they are true originals that are fantastically entertaining.

For me, this book hooked me from the start and reading it to completion became a priority I read every spare minute until I finished. And when I finished it, I wanted more stories. I knew relatives like this. 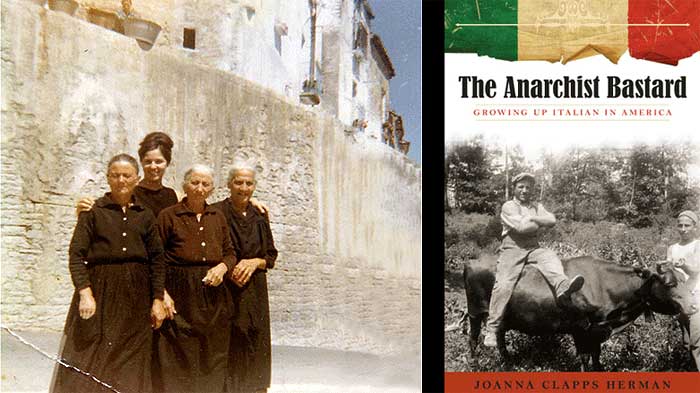 Growing up Italian in America is my life. The Italian way of life is like no other. My heritage is equally Italian and  Russian, yet no one pegs me a Russian and everyone pegs me Italian, or at the very least, Latin. I relate to Latins more than I relate to Russians, who knows why? In our home, Italian food was served and savored. Italians made up the most visitors. My mother’s two sisters both married Latins. My own cooking is Italian based. Walk into my home and you can’t miss the rich reds, ornate lamps, beautiful woods, and all the marble tables. Even the 20-foot kitchen wall looks like marble.

Still, growing up Italian in the 40’s and 50’s was not always easy. In 1950, we moved from our Camden, New Jersey, Italian neighborhood to white bread Maple Shade, New Jersey in the beginning of the summer and into our house by September. By July, my mother asked me if I had to be outside so much, because I was getting so dark, the neighbors were gossiping about it. Hmmm. What’s it like to be the darkest person in a whole town? Did it bother me that the neighbors thought I was too dark for them, that I looked Spanish or Negro? Did it make me stay inside more after my mother said what she said? I’m Italian. I look fine to me in winter as well as summer, loved my tan, and went outside all the time, because Italians like it outside in nature, close to God’s earth, where the birds, animals (Maple Shade allowed all homeowners to have horses), fruit trees, flowers all were. What was in the house in the summer? Nothing all that interesting. And, you needed to go outside for ice cream, candy and the bakery, and Italians love their favorite foods.

Interesting that nobody in school mentioned how dark I was and after that one conversation with my mother, my coloring was never mentioned again. Still, I did hear WHOP  and Ginny. Incidentally, my father worked outside, so he got even darker than me in the summer. When he mowed the lawn, because he wore long-sleeved shirts to work, his arms were white compared to his very brown face and hands. I can tell you, I doubt very much if any neighbor dared to say anything to my father about how dark he was compared to others in our town of light-skinned people.

When all is said and done, like other, nationalities, Italian is an attitude. For me, Italian attitude means sure of itself, understanding of self, knows what one is about, has a great faith in God, an immovable loyalty, knows how to work tirelessly at something that motivates the passion, loves beauty in all its forms, loves with the whole heart, relishes eating good food and refuses to eat bad food, and won’t be bullied or influenced by the demands of others. My father, when he was a Private First Class in the Army, looked at Mess and refused to eat it. He ended up peeling potatoes for a long time. Seems the Lieutenant did not understand Italians.