In the not too distant past, every town had a place of execution and to spare the gentlefolk the horror of the swaying rope; they sited many of these places well outside the city limits.

The house I’m going to tell you about tonight, is not shy about its past, though the plaque bearing its name has been taken down. Built in 1746, or so the stone above the door declares, it stand in a lonesome spot in County Clare. I will tell about its history in a moment, but first let me tell you about the present occupants. As you now know, I change the names to protect the innocent and the not so innocent. Katie is American and has for the past eight months been renting Gallows Hill House.

She and her husband Paul first saw the house being advertised on the internet and from what she tells me, it was Paul who wanted to rent it. Though thousands of miles away at the time, she admits to a strange sense of foreboding, but her husband laughed off her fears and as an artist, he envisioned painting the wild landscape of rural Ireland. She can only speak to me now, because he has returned to the U.S.A on business and she is free to do so. It is obvious from the dark circles swooping beneath her eyes that she is frightened and without her husband’s knowledge has moved in with a neighbour while he is away; more to come on this. 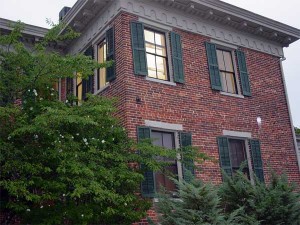 Follow me now as I lead you along the winding roads that many a condemned prisoner has travelled before us. Allow your eyes to wander over the barren landscape and imagine this as the last thing you will ever see. After leaving the green fields and the lush forest of pines behind we begin to climb into a place so alien, it might be on the moon. The land is covered with furze and the odd naked trees, bare even at this time of the year; they stand twisted and gaunt against the sky.

It’s an unforgiving place, where giant, moss-covered rocks have sprang from the earth and resemble nothing less than fallen tombstones. The hill that once housed the gallows is nothing more than a large mound in the earth. The only sign of its terrible past is a piece of wood buried deep in the stone, but there is uneasiness in the silence and this is not a place one would want to linger. The house stands back from the road and is reached by a long drive. As I said, it’s very old and if I showed you a photograph of the place, you would declare it haunted. Its style is somewhere between a small manor house and grand farmhouse. It’s a miss-match of tastes and eras.

It’s not possible to ignore the Gallows Hill from the front of the house as it stands out like a dark blot against the sky. At the back, there are some stables, in ruins now and harking back to better times and a loft that still retains the dry, musky scent of hay. There an old well, covered over now, but still in use. I wondered where the water came from, as this is a place that nature seems to have sucked dry and left to fend for itself. Over three hundred years ago the wagon bearing the prisoners would take many hours to reach the place of execution and the owner of the house saw this as a way of making money, so he rented out a room where the prisoners were housed overnight to await their fate. Their terror of what the next morning would bring has permeated the very walls and is it any wonder that strange cries are heard in the dead of night?

The first owner, we’ll call him Thomas Brown, came from a very proud family. It was his father who built the house, but there is little known about him, he was here, he’s now gone and there is nothing more to say. The stories start with Thomas, so we go on from there. He did not share the same work ethic as his father, so Thomas was determined to make as much money with as little effort as possible. He jumped at the chance of renting out the room for one day a month.

The pleading and cries of those who suffered through the longest night of their lives never touched him. He was a cruel and hard man and the stories recorded by those who knew him, show him as grasping, miser who cared little for his family’s comfort. It was on the night of his death that the haunting began and the yellow-paged diaries I read are a chilling account of what happened. He was fifty three when he died, a good age for those times. His wife had predeceased him by twenty years and his only child, a daughter, was also dead. She ran away after her mother died and married a soldier.

Two years after the birth of her child, a son, her husband died and she was left destitute. In despair, she returned to her father’s house during one bitterly cold winter, but he turned her away. Her body and that of her son were later found frozen to death in one of the outbuildings. Now she is seen walking up the winding drive to the house and leading a small child by the hand, but back to the cause of all this misery, her father.

The women, mostly neighbours and distant cousins, laid out his body in the bedroom and went down to greet the visitors. They were all gathered in the dining room, eating, drinking and telling stories about the old man, when they became aware of strange sounds coming from the room where the dead man lay. Gathering their courage, they went up as a group and a found all the drawers and wardrobes open. Since the stairs was in the dining room they knew this was not the work of some human hand and no one living could have passed them without being noticed. It was a sombre and frightened company that put things back in order and retreated back downstairs.

Later that night, those who managed to sleep were woken by screams of terror from the landing. They found one of the older ladies almost out of her mind with fear and when they had calmed her, she told them she was on her way down to the kitchen for a drink of water and on passing the late Thomas’s door, saw two white, dead hands appear from inside and these were drawn back when she screamed. One can only imagine the horror of that night, as the mourners sat waiting for the first streaks of light to appear in the sky. He was buried next day in a small family graveyard not far from the house. Imagine their relief when the earth finally covered him and he was out of sight, if not out of mind.