He flinched as blood sprayed from the artery he had struck. He drank deeply, savouring the taste of her coppery blood, and held her tighter against his chest to lessen her movements lest it causes the wound to open deeper. Her quiet whimpering cut him to the core but he still continued. He hated this. 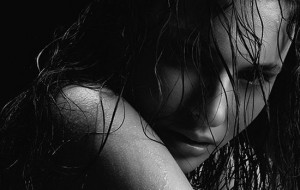 He had just taken her…willingly on her part, perhaps not so much on his. Her long-time lover had fought this day for so long. He had never wanted it to be like this for her…but she had. She needed this new life…she needed him.

There would be a precious few, however, who would welcome her with open arms. Talia, Bella Dawn and Yzabella had asked for her many times before, to have her join them, but Woelf had denied the request.

As an Elder in the clan, even a relatively new one, they had to respect his wishes or risk the punishment. Only he had the power to make the choice and bring her into his world, the life of the undead.

The blood did not bother her before and it certainly didn’t now. In fact, as she swam towards him, it drew her in. Its scent…strong bloody smell, slightly tangy, mixed with the fresh clean water of the warm pool and the falls, making it even more of an assault to her senses.
She was hungry herself, but no human food would satisfy her cravings again. She needed the blood, fresh blood, of a human.

Slowly, so as not to startle him, she slithered up behind him, watching his body tense as he realized her presence. With a deep growl, she ran a long fingernail down his back, watching as his own blood began to seep from the wound.

She had now become a full-blood vampire, a creature of the night…Dark Lady Gina, as she was now to be known, was reborn into this new life. The life she had wanted for as long as she had known Woelf…as his wife, his lady of the night…

Randy Mitchell Mar 14, 2013 5
To an unknown writer like myself, I was virtually lost while attempting to craft my first manuscript. I had a story…
Book Review