Here I sit, gazing out the new picture window, watching the recently arrived Blue Jays dive bombing the resident squirrels whom I know feel the way their human counterparts feel on the arrival of the city folk for the summer time fun in the sun. The ousting from the fir has begun.

This majestic fir tree has housed generations of squirrels who are usually grumbling by the time cooler weather rolls around; not because they face another winter with limited nuts in their coffers; no, rather the rumbling is caused by their yearly displacement by the arrival of our colorfully dressed, regally overbearing Jays and Cardinals who also bring their feuding into the area when they are not teamed up in evicting the grounded folks wearing their furry cloaks of gray.

I am of two minds when I see this battle being waged in and around the tree that has an invisible eviction notice posted every June 1, the official date for summer starting in the Hamptons. 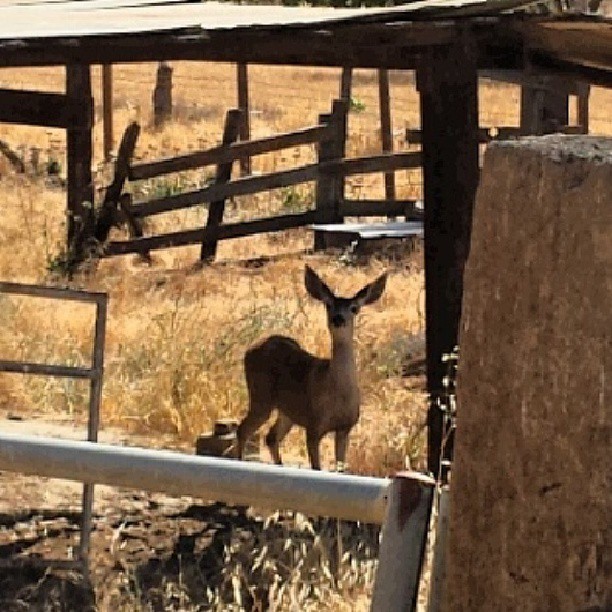 Another season of multiple kills as the back roads are discovered or rediscovered by the invaders of the tranquil setting longed for, but not achieved because their bustling lifestyle is in tow. Most of the wildlife and domestic animals know this as the Killing Season, but there is still the unwary that cannot always dodge that Suburban or Humvee barreling along at seventy miles an hour in the thirty-five-mile-an-hour zone.

Is it perhaps the fault of the year-round human resident who slows to allow the deer, the rabbit or the opossum, the squirrel or grouse the right of way; the right of life? Are we teaching them falsely that humans can be trusted to guard their lifestyle? Or should we careen down those selfsame roads daily, teaching the survivors that their place is in the sparse vegetation that has not yet been chopped down for summer human habitation?

These kills are tragic but mostly due to careless unthinking driving practices. In the city setting, one has to be a decisive, quick to maneuver driver, maintaining only one’s own safety. Streets are clogged with vehicles and pedestrians who, like the seasoned wildlife, have learned to dart and dodge so dents or death do not result. These practices work well on the asphalt roadways surrounded by the tall peaks of stone and glass but are a deadly force in the playground of the rich and famous.

Then we have the malicious killers using their vehicles as weapons to mow down the slow or maimed or innocent. They do their day tripping and all the wise beware their arrival.

Several years back there was a summer season of unconscionable behavior with the deliberate killing of two fearless fawn whose only crime,  a favorite eating spot at the corner of a back road cross street. The locals looked upon these babies as a perfect picture of nature while to a day tripper they presented a target too tempting to roll on by. Tire tracks and torn up sod testified to the two dead, broken bodies lying tangled in the shrubbery.

Later that month a young local man, walking home from a night out on the town didn’t make it. He, too, mowed down like the newly grown grass along the walkway.

These are but two examples of the myriad occurrences that happened that season. Truly a time for mourning – of the wasted life, and the quiet lifestyle one is lulled into over the snowy months and the wet seasons when only the hardy remain.

I am vacillating because I see both sides – the fun and the displacement.

I grew up in a downward spiraling neighborhood in Brooklyn. During the summer, my grandparents would pack my brother, me and them off to the Hamptons for a three to five month vacation. Summer was always spent in the Hamptons, but the time line was a variable, dependent upon weather patterns.

We would bustle about, packing only the necessities, weeks before the closing of school. The day after school closing, we were standing at the local Long Island Rail Road station awaiting departure to the Country. This ritual started long before school days were in the picture.

My aunt who married late in life bought and gave the Southampton property to her parents. Her dad had become disabled in his thirties. He was a small wiry man who had made a good living as a jockey. In the late 1930s and early 1940s chronic kidney disease was not very treatable so he was the first house husband I knew. Aunt Betty went off to work during the day, and Grandma had her work as Superintendent of our Building that kept her busy most of the day cleaning or repairing.

But the summer was away from the heat steaming up from the subway line that ran below the row of buildings along our street. Our building on the corner of Fulton Street had easy access to buses for trips to Macys or Korvettes and subway lines below to Delancy Street for our yearly shoes or decorations for the Christmas season.

Winter was played on the slate with snow forts lining both sides of Portland Avenue with ammunition stacks piled high each day. We, the good ones at aiming, had the job of taking out our opponents.  The others on the team would continue to make the ice encrusted snowballs while still others had the job of supplying the weapons in a timely fashion.

When the streets and sidewalks were clear of snow or ice, we could skate or play games popular before the advent of television or the far distant, unheard of, personal computer. Skating was adventurous because the slate slabs were few and far between but were the launching pads for the skates that hopefully remained attached to the shoes or, horror, sneakers as we shot like human projectiles around corners, down hills, skirting adults as if they were hurdles giving us scores.

For the first eight years of my life, I was the only girl on the block so learning to play stick ball or aim snowballs was a given. Out skating or out running the boys a challenge only because I was the shortest, even though, not the youngest. But was given place in their ranks because I did not wail if I skinned a knee and was always willing to take on a challenge even if having only a slim chance of winning. There was always a margin of error on someone’s part, and first place sometimes came to the runt giving incentive to participating in the next race or contest.

But, the summers, at least in the beginning had a different flavor. My cousin is nine months older than me, a softer girl who did not punch or kick and would look in horror if she needed to physically defend herself … She, the soft country and I, the competitive city.

She showed me how to make mud pies and dress cats, pushing them about in an old baby buggy. I showed her how to talk younger siblings or friends into babysitting our dolls as we would peddle the shared three-wheeler down our road, waving goodbye as we went off to work. But we were both soon outnumbered by boys and she, too, learned to play, boy games. City skates are not good on dusty roads but graduating to two wheeled bikes soon gave us the freedom and advantage to race alongside boys who would outstrip us on foot.

Limbs torn off still standing trees after hurricanes became our trusty steeds as we emulated the lifestyle of our favorite radio or television cowboy. Climbing trees, hanging upside down and allowing ourselves to fall out of trees were a deliciously danger-filled fun time.

I still have the galvanized tubs my grandmother washed and rinsed clothes in on the one day a week we did not use them for our swimming pools. Looking at these same tubs today bring back sweet memories of lazy days spent in water browning like a ripe berry, and now, wonderment on how small they appear to my adult eyes.

My grandchildren have a different childhood lifestyle. They make play dates because chance encounters even in this serene country setting can be deadly. They must be enshrouded in sunscreen and bug repellent.

The short dusty road we raced on, free of fear from cars or predators now is paved up to our driveway where an abundance of cars and delivery vans race by daily, heedless to the natural depression I refuse to fill. This merely slows them to a crawl of forty-five. I am almost ashamed to say, I wish broken axles or chassis upon these racers.

The sleepy neighborhood three miles away from the town is dotted now with summer homes which are tenanted up to ten months a year. I understand the reluctance to return to the high-stress-level walk up apartments, and these neighbors are owners like my grandparents who loved the easy lifestyle away from the cares and bustle of the city. And too, these reticent city folks get to bemoan the dirty or worse, the deadly antics of the careless or the belligerent.

Our yard, fenceless for sixty years is now enclosed, keeping animals and children safely inside. We had the joy of running the roads. They have three quarters of an acre, more than most, but so much less than their forefathers.

I can but shudder, envisioning their grand children’s future, country lifestyle.

Money And Sex Can’t Buy It