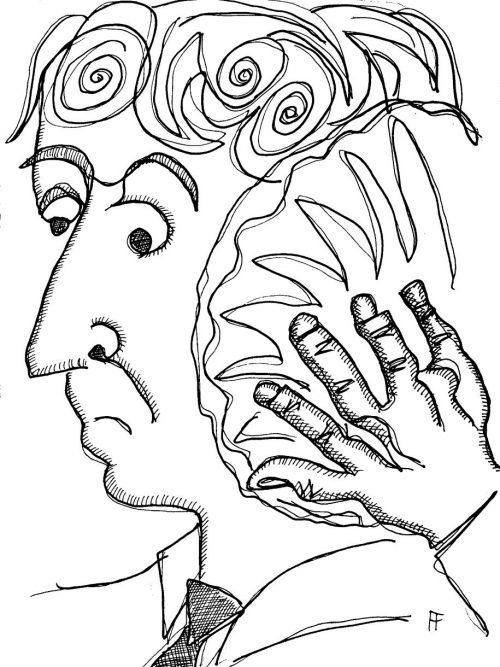 So Albert was trying to cover the noontime rush all by himself. He wasn’t doing too bad considering, but there was one man who wasn’t getting the attention he felt he deserved. He stood leaning against his car arms folded wearing a scowl.

There was a very attractive young woman in a car nearby him and she also looked unhappy having to wait.

The scowling man decided it was time to say something,” Hey! Do you think we can get some service over here?”
The young woman smiled at him her appreciation for his assertive taking the situation in hand approach. Albert looked at this man. He decided he had a look of an important man. A man with power, of some sort. Albert got the feeling he was about to make a career decision. Not a good one.

After purchasing, he returned to his prey: Mr. Manners, who’d moved his position. No longer leaning up against the coat rack, he was down the aisle a little, just standing there all by himself. Albert went up to a cosmetic counter, where a rather unaware-looking sales girl smiled at him.
Inquiring, as he pointed to Mr. Manners, “Is that Douglas Manners the head manager of this store?”
“Why yes,” she replied.
The pie box was placed on her countertop and opened. The pie was removed and deftly placed in his right hand. Her smile vanished and eyes widened. He walked over, not fast, but not slow either, to Manners who was still just standing there.

It’s funny, like in a dream when you try to do something aggressive, like running or punching and your body doesn’t seem to respond, as though you are powerless to move. Albert raised the pie to attack his victim, but he also felt the moment of aggression wasn’t easy.

The act of pushing a pie into Mr. Manner’s face was difficult since Albert was not a violent person. So the act was done with a softer more gentle motion. Adding to the reluctance of this moment was Mr. Manners himself, who upon realizing what was about to happen, turned his head slightly away from the oncoming pie. Consequently, the lemon meringue made its biggest debut not on the front of his head, the face, but on the side—right in his ear.

Manners sort of crumpled. Like he had been wounded, he slumped. After which Albert didn’t hang around to sign autographs but walked quickly away, then skipped a little, then ran right out of the store, across the street and jumped on a bus returning downtown.

It had been done. The thing he had wanted to do was done. Crazy, nutty, sophomoric, and immature, but still Albert felt a score had been settled. What he didn’t know: the score-settling was far from over.

A few days later, talking to a friend on the phone, he relayed the pie escapade.
His friend burst out laughing and said: “That was you?!”
“What do you mean?” Albert said.
“I mean there is an article about it in this morning’s Daily Providence, the headline reads: Wardwoods Man Takes It On-Ear.” said his friend.
“Really?!” Albert was amazed.
He ran out to look in the newspaper—sure enough there it was on the front page in the lower center column. The article described the gas station attendant as having a reputation for a big mouth, giving lip to customers, being fired for low job performance, and as a troublemaker.

Albert’s x-boss at the gas station was reading the newspaper clipping with his wife next to him.
He looked up and said “This isn’t true. You didn’t have a reputation for giving customers lip, you weren’t a troublemaker, and you certainly didn’t have low job performance. What are you going to do about this?”

“Nothing,” said Albert, “Since they haven’t used my name, I guess I’ll just let it go.”
The wife shook the clipping in her hand, “Imagine that, if they will print this pack of lies what else will they print?”
Her husband replied “Isn’t that what they say, don’t believe everything you read in the papers. Now I believe I can’t believe.”