I walked into the autopsy room at the beginning of the day to find a body awaiting my undivided attention which had been found in the woods above the neighbouring village where I grew up.

I was equally shocked and saddened. It was my childhood friend Dhobi.

Back then most of the kids in our village were merciless towards him, throwing stones, shouting obscenities. None of them knew the simple gentle man beneath the grime the way I did.

I was the only kid who didn’t pick on him. There was something very special about this loner who had shunned society for the woods. Never once did I wonder why he lived the way he did, nor did he ever offer an explanation. He was a man of few words.

Dhobi taught me how to live off the land by showing me how to make snares, what plants and fungi were edible and those that were not, and what were best for simple medicinal uses – the extent of his knowledge was endless. 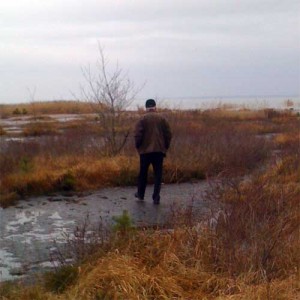 Nicknamed Dhobi (a British military slang term for clothes washing)  for as long as he could remember for the simple reason he hated to wash; to keep out the ravages of the elements, he wore all the clothes he possessed beneath his tattered ex army greatcoat.

No one knew where he came from; or cared much come to that. I often asked him, but he merely ignored me. Most adults, especially parents in our village wanted him arrested, assuming the worst about him and fearing that he was some kind of perverted weirdo.

If my parents had ever found out about my childhood friendship with this solitary man they would have been horrified! I used to walk up the hill from my home in the village every couple of days with my pockets and school satchel stuffed with food stolen from my mother’s larder for him.

Dhobi’s natural gentleness was apparent to anyone if only they would have spent time in his wonderful company.

Mice lived in his pockets. Hedgehogs curled up in the folds of his old army greatcoat around his legs as the sun disappeared beneath the western horizon until it was time for them to hunt for food.

He never ever trapped an animal to eat from his own patch in the woods, just in case he may eat a friend of his by mistake.

Each spring a fresh Cock Robin appeared in Dhobi’s camp and spent its time in the evenings on his shoulder meticulously pecking mites from his hair and beard. Obviously the respect this gentle man had for all wildlife was passed down through each generation of creatures.

On one occasion I watched spellbound as a Sparrow Hawk brought Dhobi a gift of wildfowl.

Dhobi’s greatest friend in his natural world was an old battle scarred one eyed fox that lived with him, keeping him company, sharing the warmth of his constant campfire and at night sleeping at Dhobi’s feet beneath the rough lean-to that was Dhobi’s bedroom, lounge and kitchen. Sparrows nested in the bracken that covered the lean-to, knowing their young were completely safe under Dhobi’s caring eye.

As I began carefully removing his clothing I found among the few personal possessions he had about him, a faded newspaper cutting from the nineteen fifties showing a photograph of him in uniform with a few lines beneath it explaining the photo and giving his real name. On his chest I could see his row of medals.

The first in the line was the Victoria Cross, won for an act of total selflessness in the heat of battle when he rescued his comrades one by one while under constant machinegun fire on a nondescript long forgotten hill in the Korean peninsula.

Whatever happened to him to make him retreat from the world of humanity into the natural world? Maybe Dhobi and his mates fought for a hill too far. No one would know now. No one would care except me.

After conducting a thorough autopsy, determining that he had simply expired due to natural circumstances, brought on by his lifestyle, I had him cremated then took his ashes back to his campsite in the woods he loved so much, where I silently scattered them witnessed by the creatures who called him friend.