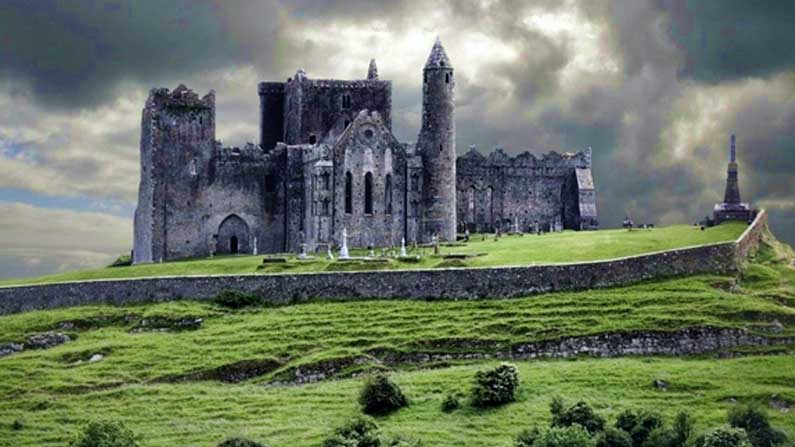 “What is the name of this place?” asked Etrick as he gazed about the darkened field.

“Carnac, my lord, we near the western sea and we can scarce go no further,” responded Alfrid.

Huddled in small groups around them were the thousands who remained, where once there were tens of thousands.  Etrick nodded slowly as he thought about all that had happened, all that would happen in the years to come.

“We have decided then, my lord?” asked Alfrid, his voice barely a whisper.

“We have, my friend, and we all know we have.  It is maybe not what we would like but it is as it must be.”

Wistfully he pushed his hair back past his long, slender elven ears and secured it with a silver pin.  His great cloak was covered in symbols of ancient mystery and wove a tale even more complex than the cloth itself.  Gathering it about himself, he climbed up on one of the mounds and called out.  The gathering of the ‘wee folk’ immediately quietened and all faces turned to their king.

“My friends, my family, my heart.  Since the dawn of time, we have watched this world grow and we have grown with it, but now things are changing and there is no going back.  This is no longer the world of fairies and elves, this is the world of man,” he said.

A murmur of discontent rumbled its way across the assembled thousands and landed heavily on Etrick’s soul.  He felt the loss as keenly and as painfully as any other, more than some, for he was the last king, and worse, a defeated king.

“What would you do?” he asked.  “Would you wage war, become slayers of human children as well, because that is what we would have to do?  To stop mankind would mean to kill them all.  Is that the legacy we would pass to our generations?  Shall we wash ourselves in blood?”

He could feel the change in the air, the sudden embarrassment.  He knew his people were disheartened, but he knew they had only two options.  One was warfare with mankind, the other was this.

“Tonight is the night of the last moon, a night most sacred to all of us.  Tonight is also the night we travel to Tir-Na-Nog, to our home of homes.  For as long as we have existed, this was the night we barred our doors and windows and hid ourselves from the sun’s morning rays.  We will hide no more.

For when the sun rises, we shall rise with it and leave behind our earthly shackles.  I have no fear, my brothers and sisters. I know there is no end here, just a transition to that place we must all go eventually.”

“It is soon, my lord,” whispered Alfrid.

“It will soon be time, be with your families, be with your friends.  Stand strong and brave and true and let the world wonder at us,” called out Etrick.

Slowly, the crowd started to disperse.  Etrick watched as some of the elven soldiers formed themselves up in ranks that stretched as far as he could see.  Some families clumped together, other spread themselves out in large circles, each looking in towards each other.  He saw one family transporting a bier on which lay one of the oldest of all of them.

He watched the thousands of them move and felt his heart break a little bit more and more for each of them.

“My friends, you are well seen,” Etrick said as he tried to force some joviality into his tones.

“My lord, it is a pleasure for us, an honour,” said Fidach

“Are you sure you want to do this thing, it means…” said Etrick as his voice failed him.

“It means, my lord, that Fidach and I will see to our people.  That we will have one final chance to say the words and chant the songs over our kith and kin,” replied Fotla.

Before Etrick could say anything else, he found himself being embraced by Fidach and Fotla.  Their arms wrapped around him and their bodies pressed in close.  It was not a thing normally done to a king, but these were not normal times.  The pair stepped back and Etrick could see the tears glistening on their faces.

“Lead our people to their new home, my lord, and wait for us.  The last moon will not happen again for a thousand years and we shall be fair sickened at missing you,” said Fotla.

“We will miss you, beloved friends, and we shall sing songs in your name forever,” replied the king.

Fidach and Fotla gazed once at the throngs of their people before clasping hands and muttering their invocation.  The earth at their feet opened up and a long dark tunnel stretched far below.  The pair glanced once more at their king before dropping down into the darkness.

“They will be safe from the last moon now, my lord.  When the next moon rises, then so shall they,” said Alfrid

“And theirs shall be the last of our voices ever heard on these green fields,” sighed Etrick.

At first he thought his eyes were playing tricks, but soon enough he knew it was real.  The sun, their friend, their life-giver, and today, their enemy and savior, was rising.  Once every thousand years this happened, the last moon.  The light of the sun following the last moon was not warming and comforting, it was changing, and it would change them.

The horizon slowly brightened and the sky danced with the changing light.  Birds began their morning chant to the sun and all of them felt the first warm glow.  With a sound barely louder than the whisper of a butterfly’s wings, the change took them all.  Where once there stood the last of the elves and fairies, now stood standing stones.  Far beneath them, in the protective cocoon of the earth, wept Fidach and Fotla as they heard the voices of their people go silent.

When the day of the last moon was over and the new sun rose, so did the pair from their hiding place.  They walked, sobbing, moaning from stone to stone as they spoke the holy words and sang the ancient chants.  For days their task was repeated until they, themselves, felt they would die from heartache.  They stroked the cold stone faces and leant against the unyielding forms as they remembered the friends and family that were all now gone.  When finally they had said the last of their prayers, and the final notes of their songs were carried away on the wind, then they looked to themselves and wondered.

“What shall we do now?” asked Fidach.  “Are we just to hide from mankind until the next last moon?”

“I think we should study them, watch them, learn from them and maybe even teach them.  We could tell them of the world they will never see and the things they will never know,” replied Fotla.

The days became centuries and the centuries became millennia.  Fidach and Fotla missed the first ‘last moon’ on purpose.  They were fascinated by these human creatures and their ways.  They traveled the world, and as they did, they became more and more adept at passing themselves off as human.  Three more times did they intentionally miss the last moon and it was only now, as the fourth was upon them, that they decided it was time to go home.

They had traveled the world countless times and been countless people.  They had lived and learned and seen more than they had thought possible.  They marveled at the horrifically short life spans and how people were able to fit so much into them.  Now Fidach and Fotla were old, even by the standards of their own people.  They missed their ancient tongue, their songs, the peace of their world.

On the last night, the pair walked down to the harbor and listened as the gulls shrieked their annoyance and the boats rocked, impatient to get to open water.  Far on the horizon, they could see the first shimmering flickers of light and they smiled their small, wane smiles.

“Kiss me, Fidach,” said Fotla, and as he did, the sun’s rays washed across them.

When the harbormaster first saw the statue, he was quite annoyed.  He knew that some group or another was always doing something; he just wished they would make sure that he was informed about it.  He was thinking about making a complaint but as he looked at the statue, he got the sudden feeling that not only would it be all right just to leave it, it would, in fact, probably just be best.

God I Wish It Would Rain